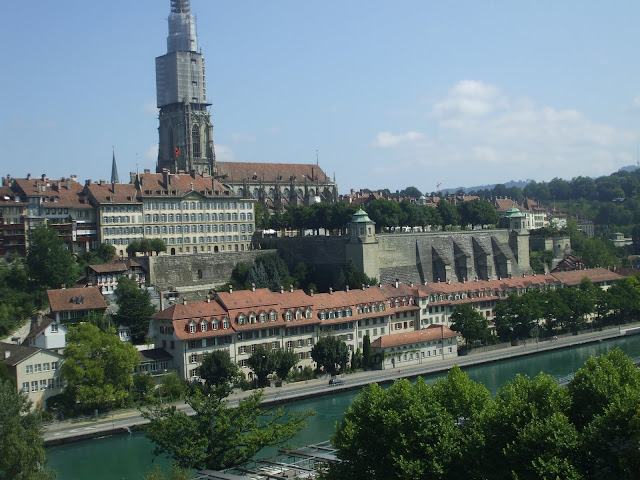 This is the number one question we get. How did 2 kids born and raised (for the most part) on the Canadian Prairies end up in Bern Switzerland? How did a boy who graduated with 15 people, the same 15 people he had gone to school with since kindergarten, end up working for a branch of the United Nations?

So I give you a build your own adventure...kind of....

My husband Johnathan had a bad day at work and to make himself feel better he applied for a job he saw on unjobs.org.

Johnathan  had a bad day at work in February 2011 and to make himself feel better he applied for a job he saw on unjob.org. There were two interviews. One HR and one technical interview which occurred using Skype. We found out a few days later we were moving to Switzerland. We found our June 30th and we landed July 30th.

The not so short version:

Johnathan interviewed for a job in Geneva Switzerland a few years ago. This was a scary time in our lives. We were living in Brandon Manitoba and things weren't that great. I was grieving the loss of my grandfather. I was unemployed having been laid off from the construction company I was working at. John had yet to be made permanent where he was working and was being strung along. He was working crazy overtime and I was at my wits end being at home. We were a mess.

The job was with the Red Cross. We thought it was a long shot regardless of the fact they flew him there for the interview. We heard back, they liked him, they encouraged him to keep applying for international jobs but his French was what held him back as it was the French speaking part of Switzerland.

We moved back to my home city of Winnipeg in 2008. Still talking every so often about Switzerland or more generally living and working abroad.

Fast forward to February 2011. John has changed jobs to give his brain and body a break. He's working at a place with no on call but unfortunately a pay cut. It's a sideways move in his career in may ways. But at the same time it's a vacation for his brain. He's no longer on call. He's sleeping at night. His blood pressure isn't the same as an overweight 80 year old man. He's happier in his personal life but he's professional life is less than satisfying. One February day, feeling less than gruntled with his job choice he started looking else where.

But this time he was seriously looking for a different opportunity. He applied for a job in Switzerland with the Universal Postal Union. He didn't think much of it. He felt better. He told me he had applied and like every other time he's told me he's applied for jobs in far flung places I replied, "As long as they have derby there I'm cool." We didn't talk about it again.

We both truly believe that the opportunity to live in Switzerland does not come up twice in a lifetime. Heck it doesn't come up once in a lifetime for a lot of people. After he did his first interview we told very few people. Unlike the last time Switzerland was on the table, we told everyone. This time we were keeping it to ourselves for the most part. I'll never forget when I told my dear friend Michelle though, she said the following, "I'm going to talk like you are going because these things aren't put in someones life path twice for them not to happen." She spoke the truth.

John did what I like to call the worlds longest interview. 2.5 hours long. Via skype. It was on a Tuesday. We found out on a Thursday morning. June 30th. July 1st we spent celebrating Canada Day with friends. We both quit our jobs that Monday. And began only what we can describe as a sprint to the finish line. My mother flew in from the east coast to help us pack. Friends, family and in one case a total stranger took most of worldly possessions off our hands. What wasn't pillaged was put into storage. We arrived in Switzerland with 4 suitcases, a backpack each and my derby gear. My dad met us in Toronto and helped us our first 5 days here.

Unknown said…
Lovely Story! I've applied once after loosing my job while in Canada, unfortunately never made the cut.. Still have dreams of trying it again...
December 31, 2012 at 5:24 AM