So I did a thing: Oktoberfest edition 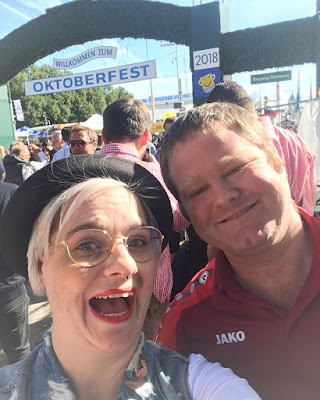 Being German I have been aware of Oktoberfest pretty much my entire life. Being a German you're asked some pretty standard questions over and over again by non-Germans;

"Have you driven on the autobahn?" - Yes, and by the way, the autobahn, isn't a special thing. It's just the German word for highway.

[insert random blind-siding questions about the atrocities of the holocaust here.]

And finally, "Have you been to Oktoberfest?"

The first time Johnathan and I went was 4 years ago. I had just gotten my job and I wasn't actually suppose to go. Johnathan was suppose to go without me. There is a group that we know that has been going on a trip to Munich for Oktoberfest for almost 20 years. The core people are usually the same with others coming and going. Every year there are newbies and returning people. It's pretty neat. They have reservations in 2 tents and a place they always stay. They have it down to a logistical dream!

But I will admit, while my first time was nice, I really didn't have that much fun.

When you walk up to the festival ground with the massive sea of humanity looking to get their drink on it's a sight to behold but it's overwhelming AF. Nothing in your life will prepare you for those fair grounds or beer tents. Tightly German controlled chaos. This was compounded by the fact that I didn't really know many people in our group other than my husband because they had all worked together or were currently working together (which included Johnathan.) So there I was, rando wife who happen to just get a job at the same place and was virtual stranger to them. They were all very lovely. But honestly, it was awkward.

This time around it was different. 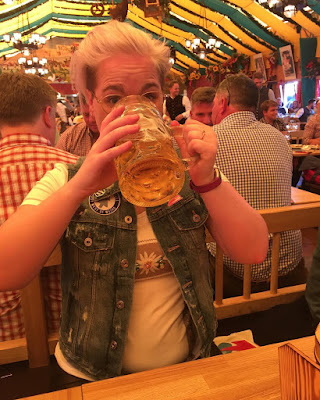 I didn't feel like a rando wife coming along with a bunch of strangers that only my husband knew. I knew vaguely what to expect. I went with the mission to enjoy my time there. Be open to the potential for adventure and just enjoy my time with people I had either not seen in a while or to spend time with people I knew quite well but not really outside the work environment. Oh and I had a plan. Sure you CAN do Oktoberfest without a plan but to me that's the easiest way to get drowned in a sea of drunken people.

This is by no means is a "how to" or "survival" guide it's more of a top tips from someone who hated their first Oktoberfest experience and wanted to do better the second time.

Top tip 1: Eat something! Seriously, this isn't just about the beer. I will eat German food any day of the week. It's the food I grew up eating so the fact that there is stall after stall of all my beloved German food is just super amazing. Plus food will help absorb beer.

Top tip 2: Don't just drink beer. Yes yes it's about beer but there are other things you can drink and still look like you're getting your drink on but you will save yourself a lot of agony later. And a mass is HUGE it's a liter and you can't drink a liter of anything that fast (no matter how hard you try) so by the time you get to the bottom of it, its generally warm and kind of blech. My preferred method is 1 radler (shandy...pananche...whatever you call it), 1 beer and then water. Drink rinse repeat. I managed to be the most sober person the whole weekend that wasn't under the legal drinking age and the only person without a hangover on Sunday morning. Go me.

Top tip 3: Pay the 3 euros and go into the old part of the festival. There is a great beer tent with entertainment that is JUST a band. More of the locals hang out there to get away from the tourists. The beer is better. It's stronger (keep that in mind when drinking....it sneaks up on people.) And it's just different than the rest of the festival grounds. 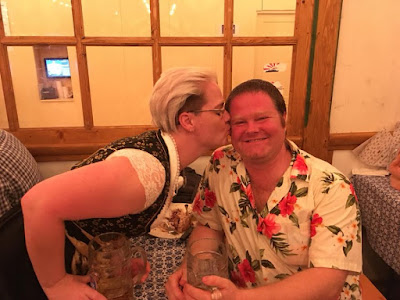 Top tip 4: Dirndls and lederhosen, wear 'em if you got 'em. Trust me ladies, no one looks bad in a dirndl. Personally I prefer the real ones (that's what I have) to the costumey ones (there is a big difference, you can tell.) But please understand if wonder bras were dresses, the dirndl would be it. Sure it took 2 people to get me into mine but we all lived to tell the tale. Also everyones butt looks great in lederhosen. I couldn't get Johnathan into a pair but one of these years I will.

Top tip 5: Speak up. Even if you don't speak the language if you're in a bind someone will help you. The place is crawling with police as well. Hell, it's got its own police station. Despite the fact that it's a festival all about drinking I never felt unsafe. I never felt like I was in a dangerous situation and I always felt like I could find someone to help me if I needed it.

Will I ever go back? I don't know but never say never. Also I love any excuse to stuff myself into my dirndl.