So I did a thing: first aid edition 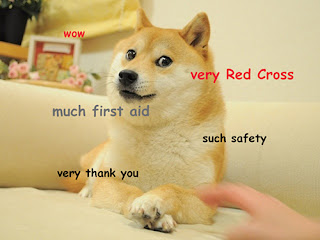 When I was in London in July with my dad and Johnathan I found myself administering first aid to a gentleman outside of Kings Cross train station. There had been an accident that involved someone on a motorcycle and a pedestrian. We heard a crash and we turned, we had just crossed the street. People came to the aid of the gentleman on the motorcycle very quickly but the pedestrian had wandered off. I remember throwing my back pack at my dad and digging out my Wilderness Wipes stating bluntly, "I know how to help!"And off I ran. He hadn't made it far and a nice young man with a bow tie (the weird the things you remember) had some cloth napkins and had gotten him to take a seat in front of the Burger King.

There was so much blood. I will spare the gory details but lets just say there was missing flesh on his leg where flesh should be. Myself and two other people we able to administer just enough first aid while waiting for the ambulance. I was careful not to touch him because while I had disinfected my hands, and had him and bow tie guy do the same there was so much blood. It wasn't spurting, so that was good, but there was a lot of it. Once the EMTs arrived I left. For the rest of the day my dad and Johnathan let me do pretty much whatever I wanted. Pizza, sure! Waiting for a cheesy photo at platform 9 3/4's?Aabsolutely. Spending money in the Harry Potter gift shop? No problem!!

While replaying what happened over a rather large Gin and Tonic Johnathan and I discussed that we should probably take a proper first aid class. Both of us have done them in the past but we figured based on what had happened and the fact that I was lucky that I remembered what to do (good for you brain for not getting rid of that knowledge) a refresher course would probably be a good idea.

The one catch, finding an English course for Johnathan. While his German is okay (I would say it's pretty good actually) and his French is awesome (he would disagree with me) this is the kind of thing you want to do in your mother tongue. In our research we found out you CAN take first aid courses online which while cool, I feel like first aid is probably one thing you should actually learn in a classroom. Not knowing where to start I just googled "first aid Switzerland English" and the first link I got was HealthFirst.

Disclaimer: I am in no way being compensated by them or have I been asked to write this by HealthFirst. I am in no way affiliated with them other than taking one of their courses. I'm simply someone who took their course, found it super awesome and want to recommend it.

I booked a course for us on a weekend in Geneva. Then John took off to Canada to surprise his family so that left me to take the course on my own so away I went.

The course was about 4.5 hours and covered everything from breaks, to wounds, to electrocution, to accidental poisoning. We covered the legalities of first aid in Switzerland which was super duper helpful and what numbers to call (did you know you CAN dial 911 in Switzerland, it will automatically route the call to emergency services?) I even learned some new things like what to do with someones glasses if you have to put them into the recovery position (put them in the persons hand that is above their head...mind blown). I should also mention nurse Cheryl was a fantastic instructor. She applied a lot of things to real life situations unlike some courses I've taken before where they apply things to worse case situations or catastrophic scenarios.

Overall the course was awesome and leaving there not only did I feel validated in what I did in London but I felt fully prepared if I had to do it again.

I also think everyone needs to take a first aid refresher (I've become a little militant about this...because you know....I needed another soap box to stand on....)

Oh and I know  not everyone has the time or the money to take a class so at the very least, there is a Red Cross app (of course there's an app) that everyone should have on their phones.

I am a participant in the Amazon Services LLC Associates Program, an affiliate advertising program designed to provide a means for us to earn fees by linking to Amazon.com and affiliated sites.
blogtober English first aid English speakers First aid first aid training HealthFirst Switzerland