I didn't have to ask 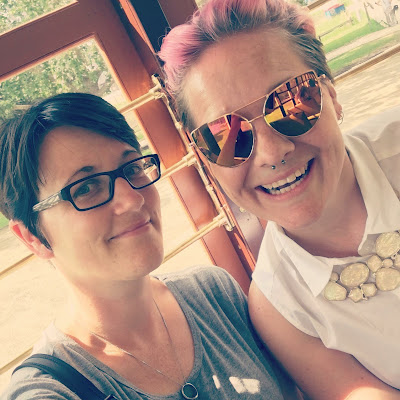 I spent much of the day I found out my Oma passed away not knowing if I could get back to Canada in time for the funeral. I started doing some mental math with dates and over and over again with the various scenarios I came up with I ended up with, "I don't think I could make it on time." When my paternal Oma passed away the choice was made for me. Financially we couldn't make it work. We had just spent a whole lot of money moving overseas so when she passed away 6 months later I had no choice. I had to stay here.

This time I had a choice for the most part.

Late Saturday night is when we found out when the funeral was happening.

It was Saturday night.

We could make this happen.

Johnathan made all the travel plans. There was 1 seat left on the flight from Zurich to Iceland and my butt was going to be in it. This meant I was going on my own. Johnathan was staying behind.

I will admit the very thought of making the trip by myself, then carrying my Oma's casket and then speaking at the memorial sent me into floods of tears. I needed to be there, I wanted to be there but being alone as I did those things was just terrifying.

Then I got a text message.

She had booked her flight.

Jamie was coming to Edmonton and she was going to arrive the morning of the funeral.

I wasn't going to be alone.

I told her then and I'm writing it again now, I have no words.

The morning of my Oma's funeral a car pulled up and my best friend and brother-in-law Jake got out. I ran to them. I threw myself at them sobbing. My person was here, brought to me by my husbands person. In that moment I knew I could survive that day. Jake picked Jamie up at the airport in Edmonton and brought her to me at the cemetery. She had flown in from Winnipeg that morning.

She didn't want me to be alone.

She just knew I needed her.

Friends help you through your grief. Best friends get on a plane and hold you through your grief. I was relieved she was going to be there but I didn't realize until we were at the cemetery just how much I needed her. The viewing the day before had been rough. Being the only one in the room without a "buddy" if you will was hard. Made harder by people saying, "it's a shame your husband couldn't come." I knew I just needed to hang on until the next morning and I would have someone who would be strong for me.

I was a pallbearer for my Oma. My maternal grandparents only have 1 granddaughter and it's me. When my Uncle asked me to help lay her to rest I was honoured. Slightly terrified but honoured. As we stood and were given instructions by the funeral director in front of the hearse I had an overwhelming sense of calm. This was the last thing I got to do for my Oma. I held on to her casket for dear life. Once we had it placed over the grave we all took a step back and then went to our respective families/people.

If it wasn't for her I wouldn't have had anyone to go to. I would have been on my own. Yes, my family was there and I'm sure someone would have stood with me. But it's not the same. In moments like these you want your people and no one from my immediate family was able to be there, my husband wasn't there but my amazing best friend was.

I went to her.

And she was the only thing that got me through that day.

I am tremendously lucky to have her.


“You have been my friend. That in itself is a tremendous thing. I wove my webs for you because I liked you. After all, what's a life, anyway? We're born, we live a little while, we die. A spider's life can't help being something of a mess, with all this trapping and eating flies. By helping you, perhaps I was trying to lift up my life a trifle. Heaven knows anyone's life can stand a little of that.” ― E.B. White, Charlotte's Web