September 04, 2017
I woke up this morning with one thought, "only one Monday left of waking up with everything hurting and thinking I'm dying." One more. Then an AGM where I officially retire.

And then that's it.

I'll be retired from 8.5 years of roller derby.

When I quietly announced my retirement plans last year to my team it seem so far away. John and I counted practices on the calendar. It was like 30 something. September 2017 seemed like a long ways away.

I started giving up responsibilities. The board did succession planning. I started training new trainers. I stopping jumping in and saying "I'll take care it!" I started letting them grow as a league without Jambuster touching everything. I even took a few Sundays off and didn't feel guilty. Slowly I became more vocal about retiring. I started telling people outside my league I was retiring.

When I started talking to people about my retirement I was met with a lot of shock. I never realized how much of me was wrapped up in derby and being Jambuster. People asked why, people were sad to see me retire, at least one person called it quitting (leaving after a year is quitting, after 8.5 it's retiring Jerkface.) My team very openly expressed sadness with my decision (still can't look at Lucia when I mention it) but listened to me compassionately while I explained it was just time for me to go. They needed to take this league and run with it and I needed to skate off into the sunset. It's just time for me. I still love the sport and I don't want to leave because I fall out of love with it, I want to leave on my terms, happy with what I accomplished.

And I am so very very happy.

I've played on two continents. I've coached juniors, freshmeat, vets, the first Swiss national team. I've played tournaments, B-level games, co-ed, C-level games, travel team, charter team, home team bouts and at rollercon. I've been a terrified freshmeat, a slightly less terrified vet, a coach, a bench manager, a line up manager, a board member, a league vice-president and a committee head. I've been on the news, in newspapers and on youtube (ha you thought it was going to be the video of me getting hit in the face!) I've been injured. I've made a comeback from an injury. I've taken a hiatus because I was mad at derby and I've come back humbled. I've lived and breathed this sport for a long long long long long long loooooooong time. I've been hit by Bonnie Thunders. Roxy Dallas gave me amazing advice on leading my league and OMG WTF complimented my hitting. I've seen Scald Eagle skate...and get penalties (and just like wait for an elevator.) I've been coached by Smarty Pants, Demanda Riot, Bonnie D. Stroir, Bootyquake, Luludemon, V-Diva and countless others. I've announced, I've been a speaker at a derby conference and, I've written for FiveonFive several times. 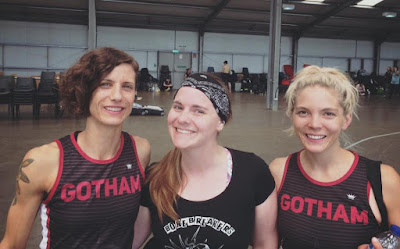 Then yesterday I cried before practice. There have only been three times where I've cried before practice (crying after practice is a completely other thing). The day I went to my first ever practice in Winnipeg, I was so scared no one would like me. The day I went to my first Bonebreakers practice because again I was terrified no one would like me and they would think I was a derby know it all. Then yesterday because I have one more practice before retirement. One more Sunday on skates with my team. Then the AGM. And then that's it.

Suddenly the end was very very nigh. And I cried.

In November someone I met at the Rule 56 Coaches Summit (Hi Lucy) asked me "what are you going to do to replace roller derby?"

I hadn't thought of that. I just thought I would be done with derby and that would a thing.  I would now be retired skater Jambuster who sits in her gear on Sunday nights watching netflix. 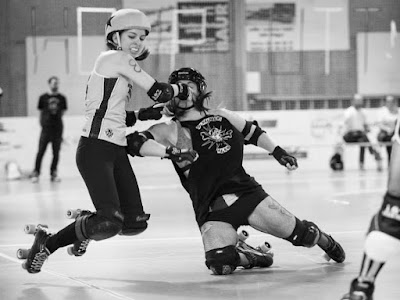 But she was right. I'm going to need something to do.

I struggled with this for a while. Derby is, and I mean this in the kindest way possible, a time suck! The amount of time I devote to roller derby a week could easily be classified as a part-time job. From session planning, to watching footage, to reading about coaching, to my league responsibilities. I do a lot of derby. So now what? I have a lot of time to fill and I was coming up with NOTHING!

Then the voice of reason (aka the husband) made a suggestion during a road trip recently,

What about all the things, experiences, activities and stuff that you gave up, didn't have time for or couldn't do because you had derby? 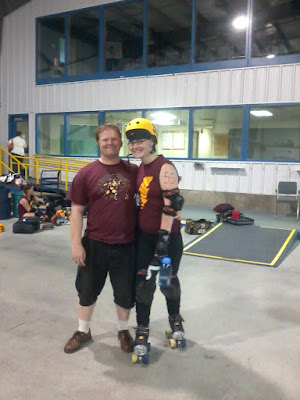 Because I am my mother's daughter I have put together a list. And because I'm a formatter and classic overachiever I turned that list into a spreadsheet.  I have 50 things I want to do in my first year of retirement. Some of the things aren't even derby related they're things that just need to be done and they probably should go on an ultimate to-do list type thing.

So I have a derby retirement plan.

I have a list. And lists lead to good things in my world.

I may just be starting my grieving process of derby being over (it's a good thing even if I use the word grieving) but knowing I have a plan laid out gives me hope that I won't become the Miss Havisham of roller derby.