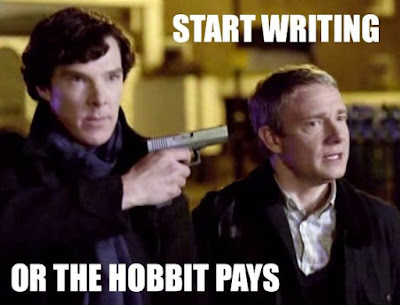 Since January writing has been really hard for me. It's not a lack of time. I've got time. I have time built into every day for writing. It's not lack of things to write about. There is always something to write about.

More than anything it's been a lack of focus and direction. Work has been bananas since October. Like b-a-n-a-n-a-s. That generally takes it's toll. The last thing you want to do when you spend all day formatting other peoples writing is sit down at home and worry about your own writing. Then there was family stuff. I was called home for something in February (yes, we went back to Canada 8 weeks after we had already been there) on very short notice, no one died, it was a family event I had to attend. I was home in Canada for 4 days. Yeah, 4 days. I worked right up to the day before we started traveling (it took us over 24 hours to get to Canada). Then the day after we got home I went straight back to work. Jetlagged and all. That whole thing left me a pretty discombobulated and without a lot of energy to cope with basic life stuff let alone writing stuff. So writing fell further and further down my priority list.

I still wrote. I have about 7 half finished blog posts. I have a bunch of short story ideas scribbled on random post-its and on the whiteboard in my home office. The whole idea of sitting down and writing something to completion felt very daunting. Overwhelming even. So I started writing in fits and starts with no completed stuff on the horizon.

My mom had noticed I hadn't been writing. She knows these things. It's one of her super powers. She knows when I'm not writing. Seriously. From half a world away this woman knows what I'm in the midst of an artistic crisis.

With her urging of "Weeds just write" I got an idea.

When we were home in Canada last summer I bought a book at the airport (by the way, that's one of my favourite things about travel, buying books in airports.) I bought, 642 things to write about by the San Francisco Writer's Grotto. It's sat barely opened in my home office about about 6 months. I grabbed it one day while getting ready for work and put it in my purse. I figured, big writing projects are too daunting right now, why not little writing projects.

It started with the goal of at least 2 a day and if I felt like doing more, I would do more. Sometimes I would work on them when it was quiet at work. Sometimes I would do one while having a beer with John on a patio some where (the writing prompt about bad pick up lines became a communal effort.)

And my mom is right (as usual, another one of her super powers) I am my best self when I'm writing.

about me adult life. Creative process what to write about writers block writing