Interview with an expat 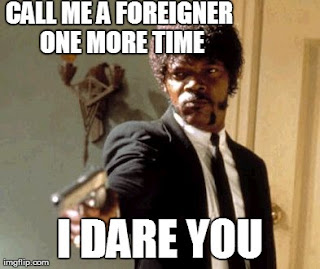 20 seconds of courage is what started this blog.

20 seconds of thinking of a name while sitting at John's desk in our apartment in Winnipeg.

20 seconds of courage lead me here.

When I started this blog is was not an expat blog. It wasn't a trailing spouse blog. It wasn't a blog with a theme or a niche. It was a blog with the vague idea of it being a way to fill my time whilst I recovered from non-profit job burn out. I picked the name because I thought it was hilarious. I found myself in a situation where I was a stay at home wife for the first time ever and the idea of being trying to be my best June Cleaver seemed rather dubious to me.

The dubious hausfrau was born out of my desire to just have a space to write and have a blog I could maintain for the long haul. I figured I would find my niche eventually.

I found myself with an automatic theme and a niche and a pretty apt blog name. Go me!

So not what I thought would happen when I started this blog.

Usually my stuff has been confined to the interweb. I was interviewed by Hello Switzerland a few years ago but that is an expat specific demographic. Needless to say the publication the husband and I recently appeared in has really shown who at work reads Coop Zeitung.

I was contacted during the summer by someone from Coopzeitung wondering if I had time to talk to her about being an expat in Switzerland for a story she was working on. Coop Zeitung is the weekly publication by our grocery store of choice. It's like of like those little local papers that come once a week in Canada that comes with all your flyers and coupons. Except this one is done by the grocery store.

I agreed to meet with Deborah for a chat and some photos. She asked I bring Johnathan along because he is in fact the reason we're here in the first place. She also asked that we pick one of our favourite places in Bern for the photos. Now as much as I love the baby eating orge fountain I figured that might be a little hard to photograph properly so I opted for the rose garden.

I chose the place for a few reasons like the view and it's not super crowded this time of year. The main reason though was because it was the first place someone took us when we got here. A local offered to give us a tour of Bern about a week after we arrived. He met us at the Kinderfresser (child eater) and he toured us through the old town and up to the rose garden. So it seemed fitting to have our photos done there.

Having Johnathan involved in this stuff is ummm interesting. While he doesn't mind it he openly admits that this communications and media stuff is totally my wheelhouse. His introvert side kicks in and he would much rather have me be the voice of our expat experience. Even worse there were going to be photographs. When it comes to photos of Johnathan and I together, awkward is our specialty. It turns out though the magician photographer Deborah brought with her some how managed to capture us at our least awkward. He managed to capture the fact that can be kind of adorable. But to Johnathan's credit he is actually a superstar about this kind of thing. Me being the voice of our experience very rarely involves him directly and when it does he just goes with it and that is fan-freaking-tastic.

The interview was less of an interview and more of a conversation which I much prefer. I know it sounds narcissistic but we do enjoy talking about our life here with people. We enjoy telling them about the roller coaster of the 30 day move, the first 6 months being the most epic blur ever in life, the first time Johnathan was able to communicate kind of in German, what it's like creating a new normal.

The outcome from the interview has been super interesting!

We now know who at work reads the coop zeitung or have friends that read it.

There was an uptick in blog traffic which is always fun. So hello new readers!

The coolest one though was that I was contacted by some students from a high school new Zurich who wanted to interview me for a school project. Seriously!

I met with them and it was so awesome (they made me thank you muffins!) I also suddenly had a moment where I realized I was a grown up. I was the adult in the situation. How strange. I remember doing projects in school that required interviewing an adult of some kind and there I was sitting in a starbucks being the adult being interviewed.

We have always approached talking about our expat experience as a privilege. Being so open about the good, bad and scratchy about this whole adventure allows us to facilitate in some small way someone elses expat adventure. Even if its something as simple as allowing someone to feel less alone or go "oh me too!!!!"