That time we got a free trip to Iceland

"We just got word from the tower. They will be holding all flights for passengers needing to make their connections." *long pause* "except Chicago, Edmonton and Minneapolis. If you are on one of those flights please go to the service desk upon arrival."

I cried. I'm not proud of it but I crumbled in seat and wept like a small child whose blanky was in the washing machine.

We were going to be stuck in Iceland when we really should be at home in Canada. I wanted All Dressed Chips damn it! I hadn't been home in 2 years and now I was going to be stuck in Iceland. I was not a happy camper. To the point where I actually blamed John for the delay. Yes, I have a superpower of being able to spin ANYTHING and I managed to make the delay in Iceland his fault because in my brain it was his idea in the first place to book the flights using IcelandAir. I'm not proud that happened...but it happened.

One thing you should know about traveling in Europe is that you are treated like a human being when there are flight delays etc. Unlike some airlines in Canada who will basically say, "well...that sucks...stand in this 3 hour line and perhaps sleep on the airport floor" IcelandAir put us up in a hotel in Reykjavik, paid for all our meals, all the phone calls we had to make to change things in Edmonton (the hotel, rental car, hair appointments, coffee with my Oma...) and our taxi to and from the airport (btw, the airport is about 45 minutes from Reykjavik.) 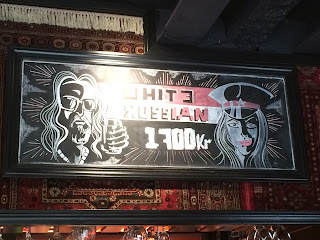 We got checked in, settled, phone calls were made. Then we looked at each other and said, "Now what?"

First priority was food. I needed food but I wasn't in the mood for hotel food and neither was John. Cue Lebowski Bar. I can honestly say this amazing theme bar made my heart happy. My lactose intolerant self avoided the white russian which was actually kind of sad but John really enjoyed his white russian while enjoyed a dirty martini. We filled our tummies with burgers and fries and tried to make a best of what was actually an annoying but totally not terrible situation.

We wandered Reykjavik aka we went for a walk to try and stay awake. Saw a beautiful sunset and took some selfies. There were a lot worse places to be stranded.

Over breakfast the next morning we spoke with a woman who was also on our flight from Zurich. They were actually headed to Canada for a 50th Anniversary. We chatted and she stopped me dead with the following,


"You know I always said I wanted to visit Iceland but I never had time. The Universe gave me time and I'm going to enjoy it."

I should note though, everyone was super excited that we were stranded. I'm not joking. Friends and family were all "Oh em gee that's so cool!" and "You're so lucky!" Really? Lucky? And we were like, "we just had to rebook hotel rooms, car rentals, hair appointments and we are losing an entire effing day with our family. Yeah, that's so cool and we're super lucky!" *insert eyes rolled so hard we got whiplash*

But in a weird way I guess we were lucky. We don't make time for adventures like we use to so IcelandAir MADE time for us. 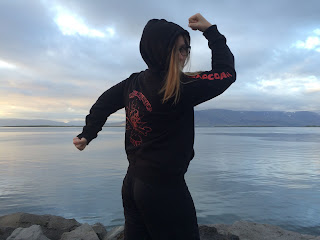 After breakfast, and a moment that will forever go down in history as an epic win for John because he remembered a German word when I couldn't in conversation, we made a point of actually looking up things to do for the several hours we had to kill. So we figured out how get to the Hallgrímskirkja (which is the tallest church in Iceland) and discovered The Icelandic Phallological Museum, thank you Atlas Obscura!

The world's only penis museum.

Clearly we were not leaving Iceland without going there! And let me just say, it's really really hard not to sound inappropriate in that sort of museum. Example, we walked in and immediately I said, "wow it's not that big." Oh the malaprops and puns. And yes, we did hit up the gift shop.

So did we learn from our 20 hours in Iceland?...other than things relating to the phallological?

Sometimes you just have the Pollyanna the hell out of situations. So we got stuck in Iceland and it we lost a day of being home and had to rearrange a bunch of stuff. It sucked. BUT I got to spent time ina place that is on a lot of peoples bucket lists, I've been to a Big Lebowski themed bar and I have the knowledge that my husband is as tall as a sperm whale penis.