The one where I admit my mom was right

My mother, brother and I are posed in front of our Christmas tree all dressed for the Santa Clause Shuffle in Edmonton, a 5 km race being held at Mayfair Park (aka Hawrelak Park). It's sometime in the mid 90's. It was cold. It was December. It was dark. It was WAY to early on a Sunday morning.

If memory serves, this was the second time my mom had run the Santa Claus shuffle. Her first 5 km ever was the same race the previous year.

This is how the event went for me. We got all lined up. The gun went off and I was stuck WALKING 5 km by myself as my mom and brother left me in the dust. I remember a very nice lady taking pity on me some where around the 2 km mark and asking me if I wanted to walk with her family. I did. I really really did. I don't remember finishing the race, I know I did but I'm assuming I was more than dead last. My mom and brother found me once I finished. While I was trying to warm up inside my brother asked me what took me so long and my mom handed me a banana while telling him to knock it off.

I decided then, in the sea of spandex and orange slices, if running races meant getting up early, missing cartoons, being left behind and being cold I was having none of it.

My mom though, she would run ALL the races.

She started running so she could run the Calgary Marathon (which she rocked.) It was one of her bucket list items before having a bucket list was a thing. Sundays became a flurry of races followed by going to church. She once ran a hilly 10 km race and then played piano with the worship team immediately after the race dressed in her Sunday best like a race had never happened. Running became that thing my mom did that was just hers.  She found peace in running. She found running to be quite fun. She found a sense of accomplishment in running.

Running was her happy place.

For years she's been encouraging me to run. It's good for me. I'll enjoy it. I'll find it meditative. I'll find it peaceful. It's great cross-training. And so on. But as most children know, the more your mom wants you to do something the less you want to do it. So I always raged against running. What was the point? Was I being chased? Am I chasing something? Is there an ice cream truck I missed? Why run when I can just wear my roller skates?

Then I started running almost a year ago.

When I started running my mom was cautiously optimistic. She was encouraging and often said when I told her about nerd-themed virtual runs and the Hogwarts Running club, "what ever works Weeds." Most of my tales of running would be peppered with comments about how I still didn't like it. How I knew it was a necessary evil and in no way was she going to win this 10 year battle of me vs. her vs. the loveliness of going for a run. 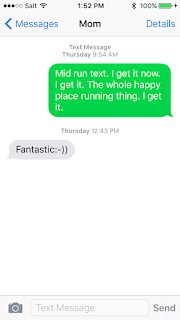 On Thursday to be precise.

Mid-run I realized I was enjoying myself.  I was having fun.

This Mother's Day mom I'm giving you an even better gift than the one that is on its way to you. I am admitting publicly for all the world to see, you were right. Running doesn't suck.

You win. Running is kind of awesome.

I will now perform the "Stan was wrong" song in your honour.