Bravery thy name is Jam Buster


6 years ago today I met Jam Buster. She appeared whiled I was standing on the jammer line waiting for my whistle...yes back in ye olden times of the roller derby jammers had their own whistle starts...and we used the pivot line... and we all rode to the bout on our dinosaurs.

Jam Buster is my roller derby name. It's the name I gave my bravery.

The first documented appearance of Jam Buster can be traced back to an incident at the park when I was a mere timbit...see what I did there....jambuster...doughnut...timbit...moving on. My mom watched me tell some older kids to get off the swings. They were too big for them and I wanted to play. I held my ground and they went away. I played. I don't remember this happening but I am assured it did and it's a moment that sticks out in my moms brain.

Apparently Jam Buster and I have always known each other. 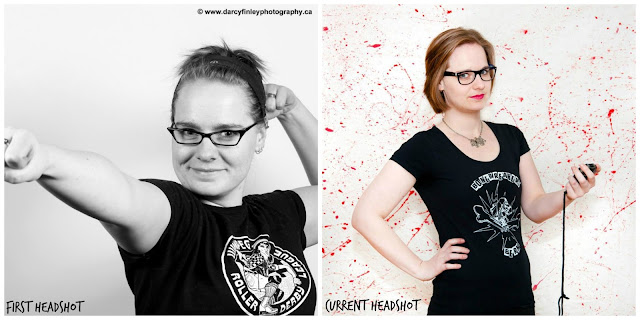 That night Jam Buster and I stopped being two different people.

I know a lot of people think of their derby name or persona as their "alter ego". I don't see my derby persona like that. I don't see Jam Buster as an alter ego. She and I have way to much in common. She's always been part of my life I just didn't know she was there. I didn't know her name. I didn't know this was something I could be all the time. I just thought those fits of bravery or moments where I had to bigger than myself were all part and parcel with growing as a person.

Then derby happened to me and put me in touch with the fact that I could be that brave, that confident, that rock star all the time.

Jam Buster doesn't give me an escape from every day life. She isn't what appears after I run into a telephone booth. Jam Buster and I are the same person. It took me a long time to realize that but she's not my alter ego at all. She isn't braver than I am. I'm just as fearless and confident as she is. Hell, Jam Buster and I even have the same really bad potty mouth. Jam Buster is my bravery and doesn't disappear when I take my gear off anymore. She's just there. Hanging out. Making me okay with trying new things. Making sure my voice doesn't waiver and reminding me that it's not "I can't" but "I can't yet."

Lauren said…
I myself an learning about courage and braver - through different ways and my braver doesn't have a name yet - but your story, your experience gives me hope that I will find myself brave one day too.....
March 4, 2016 at 12:59 AM