This year I rocked the crop. I ran in a sports bra and didn't care. I wore short skirts exposing my thick thighs that have been sculpted by derby. I wore leather pants with reckless abandon. I stopped caring what beauty standards suggested I should wear and wore what made me happy. Hell, I not only allowed myself to be photographed in a crop top but I posted selfies and OOTD pictures of me wearing crop tops for public consumption. Because what matters is that I feel good not what some person in some random magazine or on some fashion blog tells me what will make me feel good.

I can say no with no explanation required.

I'm a people pleaser by nature so I have a lot of trouble saying no when people ask me to do things. This year though, this year was about me. This year I said no. And future to that I didn't explain myself. I just said no. When I asked about why I would say no I gave an explanation but I didn't just offer it. I just said no and got on with my life. Why explain myself when no one asks. No is no is no. No matter what the reason. I have other things I like to do. Okay most people know I like roller derby and cocktail making. That's pretty basic knowledge about my hobbies. And yes, I like those things a lot. But you know what else I like to do? A lot of things. Cross stitching hilarious things. Love it. Knitting. AWESOME. Learning how to program. So cool. Yoga. YAY! Learning everything there is to know about film photography. Such fun. I managed to expand beyond derby and cocktails. Who knew embroidery floss and swear words could do that.

Sometimes you just need to play dress up

John gave me an amazing gift this year. The gift of a photo shoot with my amazing friend Daria. They were in cahoots for a while about this. They figured it all out and then John mentioned it one night while we were watching TV. I was floored. His reasoning, I should have pictures of myself. I should have pictures I can look and and go, "I look awesome!" Because this year I really felt okay with me and my body so why not have something to remember it. While John was away Daria came over and we played dress up. I loved playing dress up as a kid and I've always liked photography but being in front of the camera wasn't always my thing. It took two separate sessions to get my derby head shot right. So going into this both Daria and I we were nervous. Turns out if you doll me up and give me a prop I have no problem being in front of the camera. We had a the best time. And I can honestly say, I have never felt so pretty in my entire life.

Going to the gym can become a thing you do.

I'm one of those people now. I go to the gym on my lunch break. I lift heavy things. I run kms on a treadmill. I pack a gym bag and take it to work. I earn medals in virtual races. I buy proper running shoes rather than the shoes I've had for pretty much forever. I own actual workout clothing that is worn at the gym rather than just leggings and old t-shirts that I wear when I'm lazy. I go to the gym now. And I like it. Admittedly I'm still waiting for that "ah-ha" moment where I fall in love with running. It hasn't happened yet. Nor has it happened for weight lifting or interval training on the stationary bike. But I don't think that ever has to happen. I'm just happy that I don't mind being that person who goes to the gym three days a week now.

Going to bed early is nice.

I always thought being a night owl gave me some sort of weird writer street cred. But did you know when you go to bed at a proper time you get enough sleep and that's glorious. Go figure.

I am not only appreciated but I am loved. 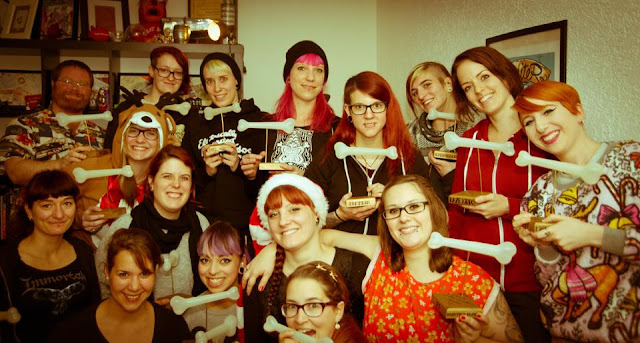 My derby team has very quickly become my family here. They are a team in every sense of the word and they make this weirdo Canadian feel right at home. They have been so open to me being their coach and they have been so encouraging every step of the way. They have always been quick with their "thank yous" which means the world to me. But at our Christmas party they floored me. They said thank you in the most amazing way possible. They filled a sack of gifts and presented it to me to say thank you. The gifts were lovely. But even more lovely were the words in the cards. They made my heart explode with happy. They not only made me feel so appreciated but loved.

Sometimes the only cure is to dance it out.

John and I weren't sure we were going to make it through this year together. I blogged about it. That was a hard thing to do. To be that open about the fact that not only was my marriage in a dark place but in a lot of ways it was failing. We were failing each other and our marriage. We're in a really happy place now which would not have happened without the horribleness from this year but what happened as a result of me just putting it out there at we were sucking at being married was amazing. I am not alone. We are not alone. Words of encouragement, concern, love and commiseration came our way. Marriage is hard. Being married to me is hard and being married to John is hard. But we make it through.

John went to his sister wedding in May. I did not. He went without me. It was no question that he should be there. He had to be there in my mind. It was a long road getting to her wedding day and he needed to be there in my opinion. I was not the priority when it came the deciding who should go. He was. He had to go and I had to let him. I had to be okay with that and it took a while for it to settle but he went and I am so glad he did. Sure the report I got on his sisters wedding was less than desirable (what was there first dance song?....something romantic? What did she walk down the aisle to?....music....) His coming home was rough. All the gifts in the world couldn't make up for the fact that I wasn't there. But he was there and that is the important part.