Remember how I said I was going to do something? 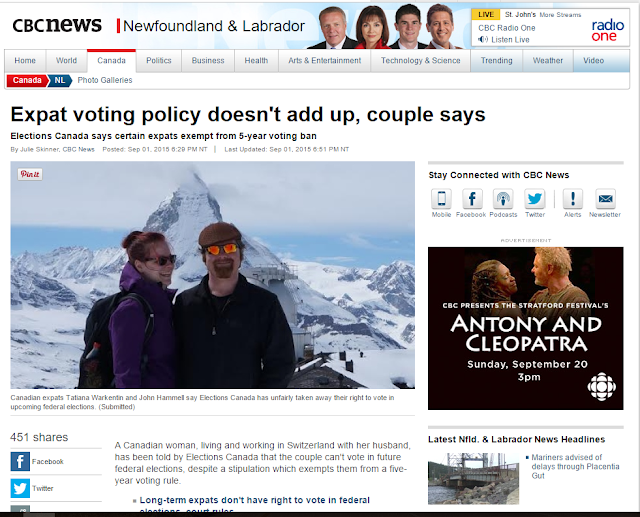 Last Wednesday I woke up to an iMessage from my best friend. This in and of itself is not unusual. I often wake up to messages from her and her from me because of the time difference. But this one made no sense. All it said was "Reading the CBC comments just confirms that people don't know how to read."

Then I opened facebook and had 27 notifications. Some of them were just notifications of people posting in groups I belong to or people I don't know commenting on something posted by someone we both know that I had also commented on. But over half of those 27 were tags of my name.

Then it all clicked (I'm not that swift before coffee), the interview I had done the day prior with the CBC in Newfoundland was now online.

Some of the tags were simple such as "Go Tatiana Go!" and "Good for you Tatiana!" Some of them were a bit more passionate like my friend Venessa, who was proud and told me to "stick it to those Election Canada jerks." And then there was my friend Susie who actually called out people who probably weren't going to vote with, "To those of you who DON'T vote: if someone living in another country can make the time to fight for her right to vote in an election in her birth country, SURELY you can get your ass to a voting station!"
Yeah, I have some pretty awesome friends.

I read the comments. I know I know never read the comments. But I did. And I wasn't surprised by what I saw. But I learned a few things and I will post them here because as John says the minute you wade into the comment section of a news article you can never get the stink off;

Which just confuses me. The idea that someone should have to pay taxes in order to have a vote is a very old and terrible idea. Does no one remember that was used to disenfranchise blacks for years in the US, and the reason for riots in the 1980's and 90's in Thatcher's Britain.It's true John and I don't pay taxes in Canada. But that's because of something called tax treaties. Canada pays the UN. The UN pays us. Canada can't tax us on the money we earn.

A lot of people assume we're rich because we live in Switzerland.

A lot of people assume what happens in Canada doesn't have any effect on us.

The federal government sets and enacts foreign policy, which affects us every day, and industrial and environmental policy affects everyone world-wide. If you've been around this blog for a while you know John travels a lot for work. And what he's found out is that Canada is the world's cousin. I've found that out too. I'm convinced the populations of Vancover, Toronto and Montreal are simply populated with the cousin of everyone we meet. Everywhere we go, nearly everyone we meet has a friend or relative in Canada, and they all pay attention to what Canada is doing on the world stage. We want a say in how the country we represent is acting. Furthermore, domestic policies will influence our decision to come home or not.

The last thing I learned interested me the most, some expats don't think we deserve the exemption. Yes, it's true. There are those who believe that it's all or nothing.

I don't agree with the 5-year limitation, obviously! BUT we have to abide by it, until it is overturned. Part of that limitation lists certain exemptions, because it was recognized that Canadians who work in international organizations like John and I and many other Canadians are working for the betterment of Canada (and everyone), and that we didn't leave Canada because we were abandoning our country, we left to work to make it better. To find that the simply laid-out exemptions on the site were not being applied to our org because there was a list that I couldn't see and could not try to correct is just ridiculous. Yes we want to change the law. But until the law we can do that we want them to at least abide by the letter of the law they wrote.

So what can you do to help?

As an expat Canadian who can't vote this election I recommend you submit a complaint to elections Canada. https://secure.elections.ca/Complaints.aspx?lang=e

As an expat you has NOT been away for 5 years, please make sure you are registered to vote.
http://www.elections.ca/content2.aspx?section=vote&dir=svr&document=page-b&lang=e

A fundraising campaign has been launched to bring the appeal to the Supreme Court of Canada.
http://www.gofundme.com/ourrighttovote

As a Canadian you can VOTE! There is 1.4 million expats who can't. Vote because so many of us can't. So the least you can do is get to your polling station and vote. Not going to be around on election day, advance polls and absentee ballots are your friends. John and I voted in our last election the other day. We mailed our special ballots knowing we may never be able to do that again. And I paid 3.80 CHF in postage to do it.

Unknown said…
Nice piece. And thanks for all that you did.