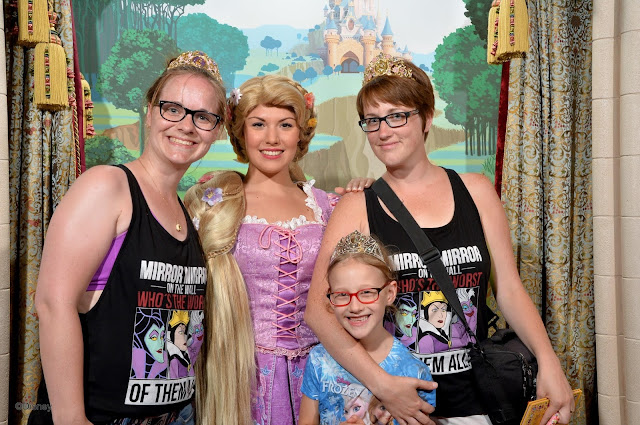 And wouldn't you know it the minute you set out to do a week of posts about your epic Disney adventure life gets dumb. There is a blog post about why life got dumb in the works but I'm having trouble finding the right words for it. I'll talk about it...at some point but for now let's talk about princesses.

Jamie and I were already in the midst of Disneyland Paris discussions when I mentioned Auberge De Cendrillion. We were going to Princess it up in Disneyland and this included lunch with Princesses. 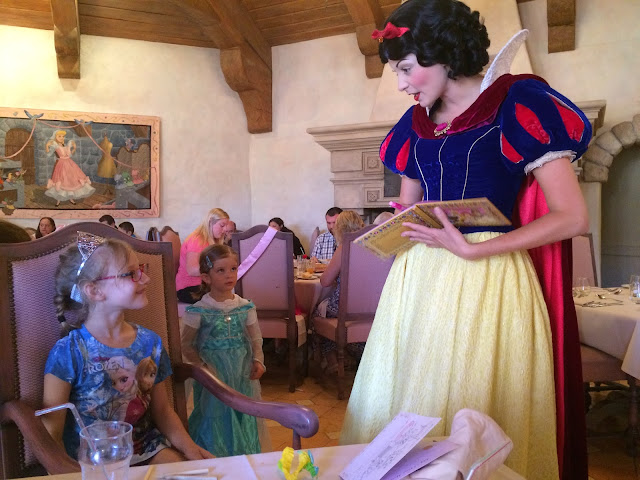 Warning to people who want to do this, BOOK AHEAD!!! I cannot stress this enough. As we were waiting to get in for our reservation time there was a family who showed up with a little girl dressed as Snow White. The dad overheard us talking about our booking times with the family ahead of us in line. He asked if we needed to book ahead. We all said, "yes." He disappeared with his wife and their Snow White to see if they could talk to someone. They did and the answer was "we're completely booked for the day." That little girl...oh my heart hurt for her. She looked so sad as they walked away. I heard the mom say, "we'll see if we can get into the Princess Pavilion."

Which brings us to the ranty shanty portion of this post. 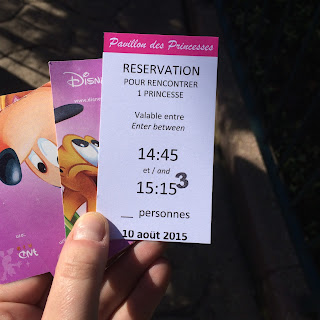 If you follow me on twitter you might remember a series of live tweets while I waited in line to get a much coveted princess pavilion reservation ticket. You stand in line, to stand in line, then you wait until 10:30 for them to start handing out the much coveted tickets. No ticket no princess pavilion. I triumphantly sent John the picture of the procured tickets once I got my hands on them and proceeded to declare myself godmother of the millennium.

Once inside during your designated time a park employee directs you where to stand. Which princess you see if a complete surprise. We met Repunzal. She was lovely. We are quickly ushered out after a few minutes and some pictures. Then your princess experience was over. That's right you only get to meet 1 princess. And you could meet one you've already met if you do the princess lunch like we did. we lucked out and got Repunzal. The other princess was Snow White whom we met at lunch.

I texted my outrage to John who said, "well the ticket only said one." BA!?! Jamie and I found the picture on my phone. It did just say 1. Damn it.  We hadn't noticed that before. Of course now Jamie and I couldn't unsee it. It's like right there. On the ticket. Not the godmother of the millennium. Just some woman who stood in line for 45 minutes and can't read a ticket.

Clearly my goddaughter was devastated. Hell, Jamie and I were devestated. She was happy she met one but she thought with all her 7-year-old being she would meet more than one. And we didn't know any different. So we gave her permission to be upset. There were hugs and Jamie and I told her what we were going to do, we were going to sit there and be angry together for a few minutes, Aunty Tana might even send an angry email because she's really good at that, and because Monkey was right, it wasn't fair that you only get to meet one. And then we were going to have ice cream.

Her spark did come back after some ice cream....and singing with 200 other Frozen fans at the Frozen Sing-a-long. 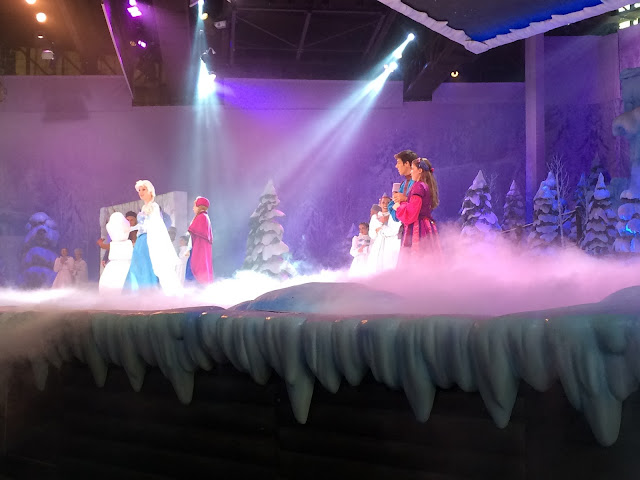 Yeah we totally sang "Let it go" with Elsa. No big deal.

Fun fact: Monkey got so excited during the sing-a-long I got punched in the face. Yup a tiny fist throw into the air in a fit of Let it go fever connected with my eye...right under my glasses too. Impressive. And hilarious...and slightly painful.

The last princess we held court with was Merida. My favourite. This was a fluke. We saw a line at where we knew they had her Meet n' Greet. But we thought she only did this in the morning. Turns out no, it was Merida. You know that scene from Elf where Buddy freaks out over Santa...yeah that was me and Merida. We took a selfie and she said I had a brave name. I think I'm going to put that on my CV.

Fun fact: She give the best hugs.

Further fun fact: If John has to hear one more time that I met Merida, he might leave me. 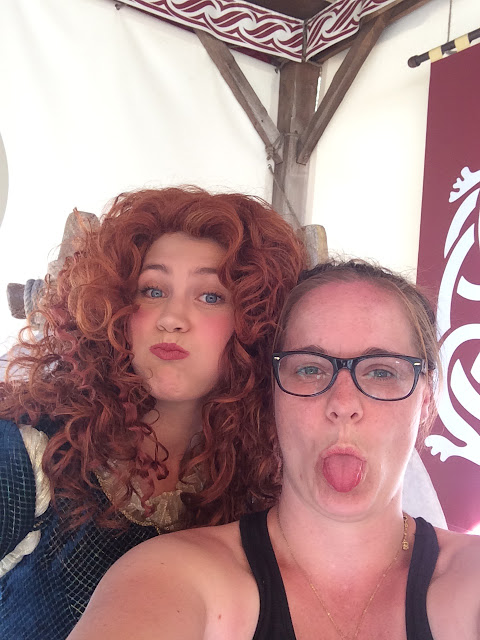