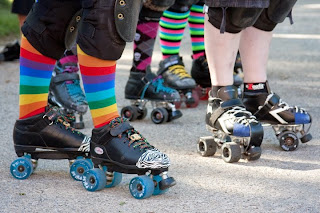 Yesterday marked 6 years since I ovaried up and went to my first derby practice. It took place at a skate park because back in those days we couldn't get a consistent practice facility. I was one of three freshmeat. At that point in my leagues history we had yet to have a bout, we had yet to really scrim against anyone but each other and there was no formal freshmeat program, just a new person from the training team every week who would work with you.

My first practice consisted of an off skate workout that I'm fairly sure tried to kill me. I was dealing with a back injury from pole dancing with the trainer that day was sympathetic to but also found that hilarious. We when all put on our skates and skated at the skate park...yeah...I learned to plow stop almost immediately not because I was a quick learner but because I was scared of dying or worse breaking something. And now you know current team why I don't go to the skate park with you...my first practice took place at a skate park and I'm fairly sure I'm scarred for life.

I've always known why I started playing roller derby. It was because I needed something that was just mine. I wasn't content living my life defined only as someones wife or as the girl who works for the children's charity. My Oma was the inspiration. I've blogged about this before. My paternal Oma loved roller derby. Old school, fake, banked track, Ann Calvello, Skinnie Minnie (my Oma's favourite), no apparent rules roller derby. It's said it was one of the few things that would make my Oma take a break from her purposeful bustling on a Saturday afternoon. I skated for both of us.

In the last 6 years though there have been moments where I wonder why the hell do I keep doing this. Part of it is because I got to re-write my derby narrative. When I joined the Bonebreakers 2 years ago (my god it's been two years?!?!?!) I made a lot of very strategic decisions on how I was going to experience derby the second time around. No more derby/personal life collisions. No more feeling guilty if I can't come to practice. Being honest with myself about what I'm capable of. No more skating when I'm injured. Playing to my strengths instead of assuming all I had was weaknesses. I can't play the really physical game I use to because lets be honest, I started playing when I was 25 and a 25-year-old body bounces back from a bout much faster than a 31-year-old body. But I get to dictate my experience in derby now and that's an amazing opportunity. Before our move my experience in derby was dictated by the culture of our league. While I loved my league and the people in it sometimes I lost sight of why I started playing derby in the first place. I was experiencing derby how I was told I should experience it rather than in a way that was on my own terms.

Two years ago I was given a second chance at derby and I wasn't going to screw it up.

That's my goddaughter. She started playing junior roller derby a few months ago. She's taken my derby number of 55 as her own (which barely fits on her tiny arm) and has worked her tiny butt off. And she has fallen in love with the sport I fell in love with in the process.

Monkey and I speak the same weird derby language now and it's a beautiful thing. I will admit it's hard for me sometimes to just be Auntie Tana and not Coach Godmama Jam Buster. I have sent her videos of how to correct her t-stop and how to get more out of a crossover. I have had the talk with her about what happens if she doesn't pass her minimum skills. But more than anything though she knows I'm her biggest fan...okay second biggest...her mom out fangirls me just by virtue of being her mom. I just want amazing things for her derby experience. I want her to dictate how she experiences this game that changes lives. And I think she's doing that. 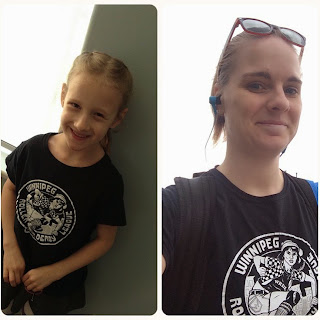 And I'm not going to lie...she's pretty impressive. She knows the rules better than some of my freshmeat...and some of my vets (note to coach jam: review rules with team.) She skating now like she's been skating for a year rather than a few short months.

She's teaching me stuff too. A few months ago I got a the following from my best friend. It's a conversation she had with Monkey.

GD: I'm going to start doing things the derby way.
Bestie: what's that?
GD: When things are hard I'm gonna go, "I got this."
Bestie: that's a great attitude to have.
GD: I'm going to say it in my head though, people might think I'm crazy.

I started for me and my Oma and I continue because of her. I got this.