Sometimes I still need my Dad

I'll be 31 years old on Sunday. And I like to think I'm pretty okay at being an adult. I occasionally have random acts of being a grown up that go off swimmingly.

I have a full-time job. I handle our finances. I can occasionally have an intelligent conversation about things that have no relation to roller derby or cartoon shows.

I'm the world's okayest adult....most of the time.

Other times...like Saturday evening that goes right out the window and revert back to an absolutely helpless small child and call my daddy.

Yes, I called my Dad in a moment of crisis because in my totally freaked out brain this seemed like the most logical thing to do because John was in a different country.

Yes...I know...my dad was also in a different country but like I said calling him made the most sense at the time.

What was the crisis?

There was a spider in my apartment.

That's right there was a huge gimornous scared this derby girl half to death spider on a wall in my apartment on Saturday night and I was alone. In my defense, I am not the scary bug killer in my relationship. That's John. When we got hitched we agreed John would always make the coffee, make sure the Wifi worked and killed all bugs. Over the last almost 9 years John has gotten use to my complete meltdowns over spiders and other crawly things. He stiffles his laughter and he goes about the business of making it dead. Although I'm fairly sure when I'm not there he just releases it into the wild rather than committing murder.

Just to give you an idea of what kind of complete hot mess I am when it comes to spiders I once found one while vaccuming. I promptly stopped, left everything where it was. And then left for work 45 minutes early and called John from the train saying, "there is a spider under the heat register in the living room. Please kill it before I get home." He proceeded to take a picture of it and put it on instagram before he got did away with it.

So there I was, trapped in the kitchen. The phone was in the living room...rather than risking the spider jumping off the wall and attacking me (I'm fairly sure that was going to happen...) while I tried to retrieve the phone I used my cell phone.

I pressed "Daddy" in my contacts and let it ring while I not so silently freaked out.

My dad answered and I proceeded to explain in only the way his freaked out little girl who needs her Daddy can that there was a giant spider on a wall and I didn't know what to do.

Cue my dad stiffling laughter and asking me if I'm aware of how weird this is. Yes I was aware of how absolutely ridiculous this whole thing was but could he please tell me what to do.

Armed with a Swiffer and a book (side note: the first book I picked up was a Terry Pratchett book and I thought to myself, oh no I can't use a Pratchett book, John would kill me.) my dad talked me through knocking it off the wall *cue freaking out that it was moving* and then smashing it *cue even more freaking out*. He also warned me it might twitch when I swept it up, it did and I screamed despite being warned.

After this was all over my dad proceeded to tell me tales of spiders he's had to deal with and really this one was probably pretty small potatoes and then informed me I probably should never go to Cambodia...or Paraguay...or Laos...or...a lot of places. Which he's not wrong about.

His last instructions to me regarding this whole spider debacle were,

"now Weeds, go to your bedroom and change your underpants..." 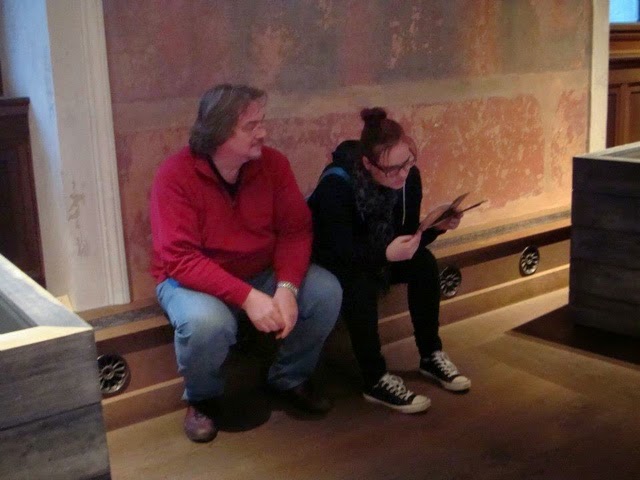 Katrina Elisabet said…
Awww! I laughed and also got the warm and fuzzy feels for this post. I share your distaste for spiders! I love how you called your dad, though - even when he's so far away! :)
February 25, 2015 at 3:47 PM

Anonymous said…
I admit, I lol'd. It was a little funny, especially the final remark!