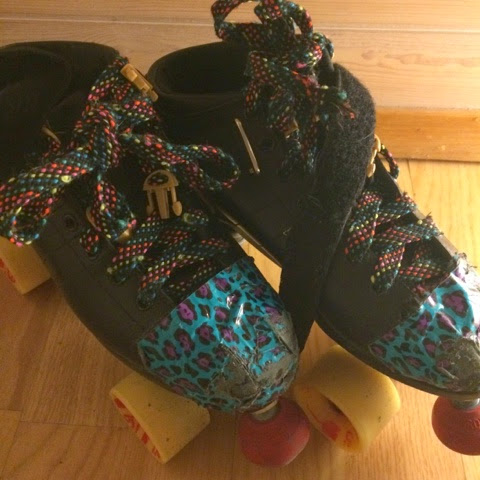 I remember the day I got you. I couldn't get home from work fast enough. There is a picture of that day lurking on a hard drive some where. I still have the original invoice for you for what ever reason. I didn't know when I opened that box that day that everything...absolutely everything...depended on you. I didn't know you were here to save me. I just thought you were just an opportunity to do something fun and get some much needed exercise.You changed everything.

You were there for my first practice. Where I'm fairly sure Red D tried to kill me and it took place at a skate park so I mastered a plow stop pretty damn quick to avoid falling on my face in front of my new league mates. You were at my first public scrimmage where my knees shook as I jammed....and took out a ref. You were on my feet when I was drafted to my first home team and I realized I hadn't been picked last...just alphabetically. You were on my feet the day I found out I was going to be an aunt...in that moment I actually forgot you were there when I jumped up and down.

I remember the first time I used you in Switzerland...I forgot I was from a place who no hills. I dragged you up a hill and we sat for a second in the grass. It was early on a Sunday morning. Jet lag had me up early and I was still getting over the shock of our move. I starred at you and I wondered what the hell was I doing. It was shortly after that Sunday morning I locked you in a closet for 18 months only taken you out every so often to skate outside a little bit. We spent a lot of time sitting at the top of hills on those rare trips outside.

My stomach turned and my knees shook when I put you on at my first Bonebreakers practice. It had been so long since you and I had done anything derby related I wasn't sure if you were going to be as kind to me as you use to. You were...my body...not so much...but you my beloved wheeled shoes were just as you always were. Perfect.

I asked John if I could have you bronzed. He looked at me in that way suggested he wasn't entirely sure if I was joking or not. I assure you, I was only half joking. Someone else asked me if I would pass them on to a fresh meat skater...I know it's probably good derby karma to do that but I just can't. And let's be honest, no fresh meat skater is going to want the coaches trashed 6-year-old skates. And I don't think if at this point my heart could handle you not being in my life. You and my elbow pads are the last pieces of the old Jam Buster. Hell you were there before I was even Jam Buster. You were there when I was just Tatiana the freshie who couldn't walk on her toe stops and did half-assed push ups.

You made me brave. You made me try. You made me feel like I could do basically anything. You changed my life. I know that sounds incredibly dramatic but you did. I was searching for something when roller derby found me and that lead to you landing in my mailbox.

Old friend you and I will still skate together. I promise. Outside on sunny days where we will sit at the tops of hills and wondering what in jebus name we've gotten ourselves into.

So so so much love,

Tatiana the freshie who needed to get lower. 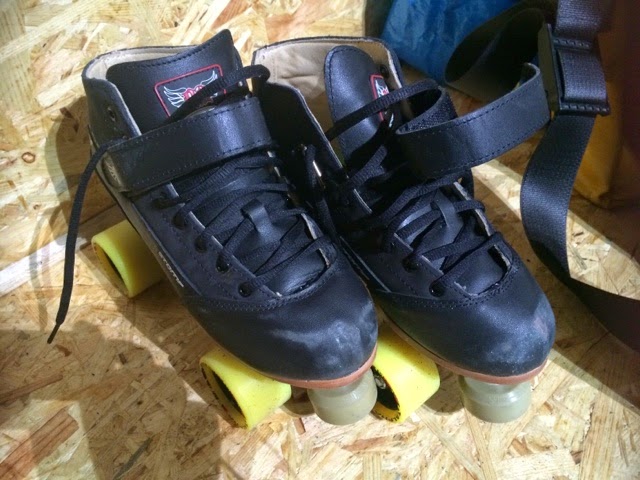 You gave me a blisters and some foot cramps last Sunday. Your trucks are super tight and I'm still trying to figure out just how to lace you so you feel loose enough that you're comfy but tight enough that you're still safe. I'm still getting use to the fact you require a different kind of skate tool. I have a feeling tonight you might give me foot cramps again. I know you're a better skate for me. I listened intently while the nice guy in Dallas fitted me and explained all your awesomeness to me. I know you're going to make my life on skates a little easier. I more than earned you after skating on my fresh meat skates for far longer than I ever should have. You're honestly pretty great...especially that cushioning in the ankle, heaven!! Just remember I'm still learning to love you. I like you...a lot. I would even suggest that I like like you and like like can lead to love. And while you're not here to save me like my old skate were you are here to carry through the next derby adventure.

Jam Buster who will probably blame you for a lot of things...don't take it personally