that time we did this thing in Dallas 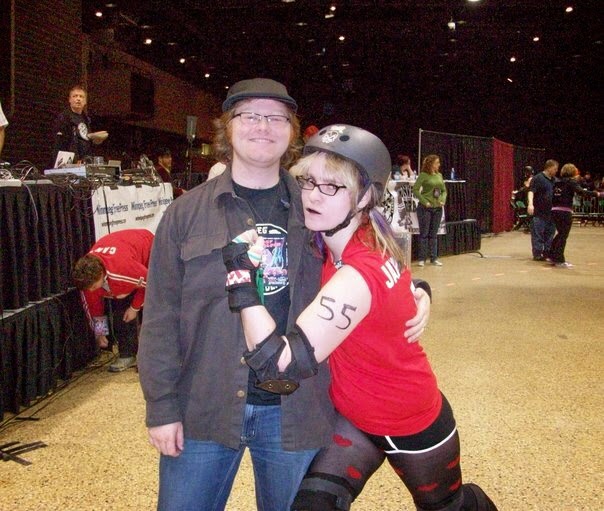 This picture was taken February 27, 2010. I still have that scrim shirt....and those elbow pads. This was my first public game. It's the first time my best friend cheered me on (I'm assuming my godson did as well as he was in utero.) It's also the only time many of my extended family saw me skate AND it's the night I found out John and I were going to be an Aunt and Uncle (so technically my niece was there too.)

It was a big night for me.

And a night I will always remember as not the greatest game I had ever played (we won yes but let's be honest your first bout is never your best...) but also one of the greatest things I've ever done. If I'm completely honest, this game ranks only slightly lower than my wedding day in great life events for me.

Prior to this epic game of personal importance John had spent a year hearing me go on about how I wanted to join the Winnipeg Roller Derby League but I was to scared. I hadn't played a team sport since I graduated high school. And then there were my own insecurities of, "what if they don't like me?!" I joined WRDL in 2009. They didn't think I would last. I was too nice, or so the rumour suggested. And I think they found my rainbow socks unsettling. But I stayed. I was battered and bruised by the sport and my ego got the crapped kicked out of it. Roller derby has made me cry. Scream. Yell. If I quit every time I declared I was going to quit I wouldn't have had the world cup.

My girls have done an amazing job. They've worked their asses off while I stood there with a note book and a whistle. They did all the things I asked them to do and then some. They went there excited to meet some of their derby heroes and skate with some of the best players the international derby community has to offer but they're going to go back to Switzerland the players that other players want to be. When I grow up, I want to be them!

The Roller Derby World Cup reached in and grabbed my soul.

I had moments of  abject terror over the last few weeks. There was one moment were I was sitting on the bathroom floor thinking I was going to throw up and saying to myself, "what am I doing?!"

I was skater who had ever excuse to not try...yeah I was that skater.

The key word there is "was".

I was that skater. That skater disappeared a long time ago and was replaced by someone who wanted to get every little bit of knowledge and experience out of roller derby.

I'm still processing my world cup experience. John and I often joke "I laughed, I cried it changed my life" over very trivial things like trip to the grocery store. But here's the thing. When it comes to the world cup I did laugh. I did cry. It did change my life. As a skater, as a coach and as a person.

Words are my thing but when it comes to Team Switzerland and their performance at the RDWC I can't find the words. I can't get them out. I am so proud. So inspired. So...everything.

I am humbled to. They gave everything they had in every single one of their games. They played harder than I ever thought possible and they made history. We made history.

We showed the world there is roller derby in Switzerland.

As I come down from the high I'll post more. I'll find a way to form sentences about it all. But for until then I'm home, in Manitoba with the husband surrounded by people who are cool with me talking about it...or not.

Until I can find the words please know I am proud, humbled and in love with Team Switzerland.