September 24, 2014
John and I are both kids that were born in the 80's but grew up in the 90's. We are also both kids who didn't have cable. We were at the mercy of what we lovingly call "peasant vision." We got the basic 3 channels and on good days when the skys were clear and the rabbit ears were just so maybe we could get a 4th channel. But as you can imagine being the city mouse and country mouse that we are our childhoods had very little in common. 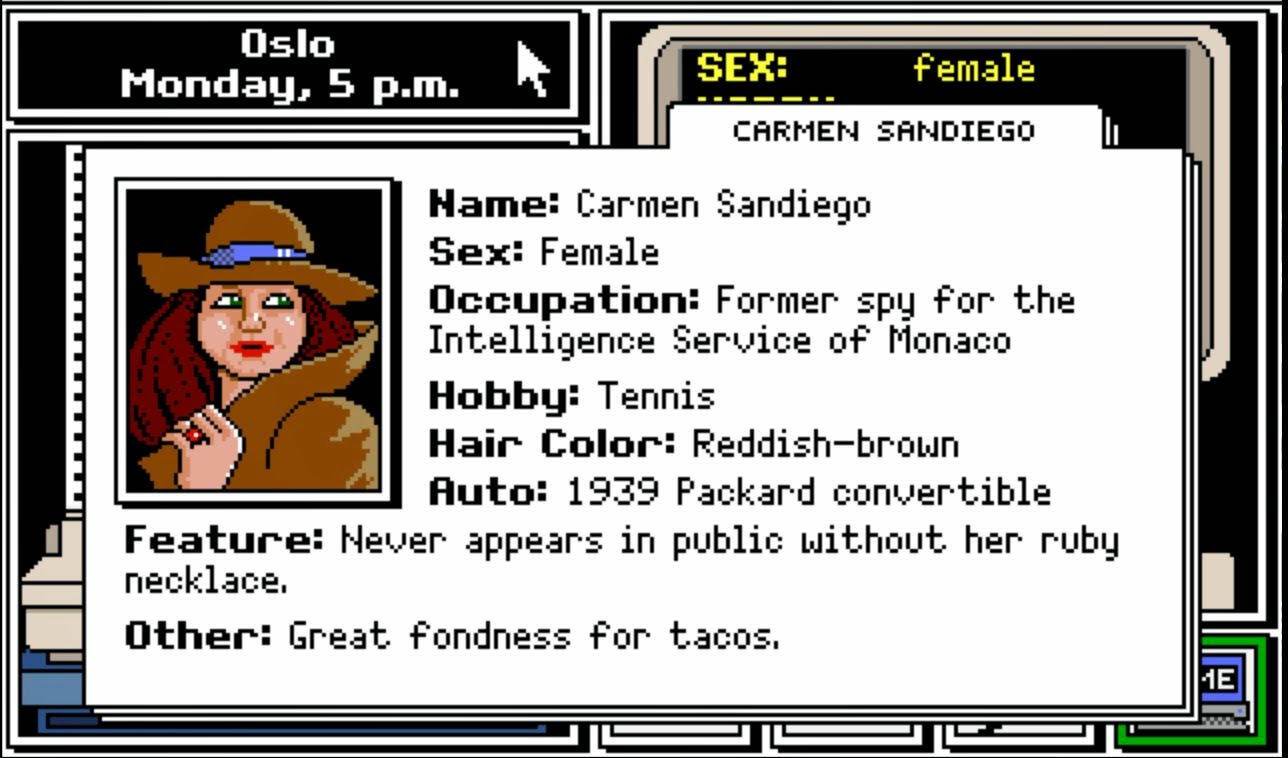 John and I both remember playing the computer game. It's what you played when you couldn't get to the Oregon Trail disks fast enough. That's right disks....and not cd-rom disks either. Big floppy disks that were kept in a thing that kind of looked like a Rolodex (do people even know what a Rolodex is anymore?)

Then there was the TV show.


After school this was one of the few TV shows we could get when you had no cable. Plus it was educational so no one could complain about you watching to much of it. Now geography was NOT my strong suit. Trust me. My parents have a map I filled out in grade 5 where I put the province of Newfoundland where Greenland is. Yes. I did that (fun story, we moved to Newfoundland later that same year.) John on the other hand is pretty good with geography. Which considering how much he travels for work now is great.

For John and I Carmen Sandiego is a weird little cultural touchstone for the two of us. John is three years older than me so there are quite a few things that were just off his radar because of our age difference. But this sticky fingered filtcher acts as common experience for the two of us. When we were in Poland last year there was a girl wearing a trench coat and a red hat having her picture taken at some castle. John turned to me and declared, "We found her!!! She's in Poland!!" Our polish friend who was with us didn't get it, but I did. I may or may not have immediately started singing the theme song. Even more recently we were in Munich at Oktoberfest (stay tuned for that blog post once I've fully recovered) three of us were buying touristy alpine hats (...or as we thought of them...smurf hats) I was torn between the purple and the red. I couldn't decide. Then John said something very wise, "get the red one so you can have a Carmen Sandiego hat!" SOLD!!

So what ANY of this have to do with predicting our future?

Not much other than we had a weird full circle moment about a month ago. For whatever reason I wanted to watch old episodes. Not sure why, but I did. Cue Youtube. YAY someone has put whole episodes on youtube. This time around John and I felt way smarter, the jokes were actually kind of hilarious still and we still rooted for the kid at the end to find all those countries on the map. Wow the lightening round is stressful!!! And yes we may have yelled "do it rockapella!" at the end.

However in the second round of one of the episodes we were watching, you know where two players go head to head playing that memory game, earlier we both mentioned we vaguely remember this episode for some reason. During this round they were "in" Java. John remarks, "I've been to Java." (side note: watching this with John quickly became, places he has gone on mission.) As the two contestants are struggling to find the warrant, the crook and the loot one of them says, "Main post office!" She found the warrant. John and I were silent. We hadn't really read the board of locations. We looked at each other and he finally said,

"My first mission was in Java...at the main post office...."

In that moment we both realized a silly geography game show (I still kind of want one of those gumshoe jackets) told two kids in different parts of Canada about a moment in their future.

Although upon further questioning by me John doesn't remember either a warrant being there or a woman in a red fedora. So he'll just have to settle for the ridiculous woman in the red fedora he married.

Unknown said…
Haha, so funny! I just barely remember watching Carmen Sandiego with my sister. Also, can't wait for your Oktoberfest post!! Hope it was a blast and that you are recovering nicely :P
September 24, 2014 at 9:58 PM