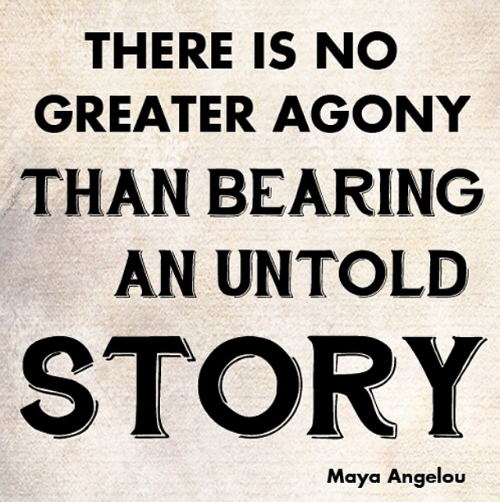 You're probably wondering who the hell I think I am writing a letter to you. I don't have a bestseller, yet. I haven't made a name for myself in the writing world, yet. And I'm just some 30-year-old woman with a laptop and a lot of words that will never see the light of day.

But I am someone who has made that transition from saying "I want to be a writer" or "I'm trying to be a writer" to someone to says, "I'm a writer" and "I'm working as a writer." So I might know a thing or two about writing. More than anything though, more than my age, experience and publishing credits I think I have a words, in the form of a super convenient list, I can share with you that will help you share your words with others.

1. Every. single. time. Someone looks at you smugly or with that "oh isn't that adorable" smile and nod. Tell them to go to hell. I'm serious. You don't need people like that in your life. All they will do is plant seeds of self doubt. You don't need people who belittle your effort to make your dream of being a writer a reality. They also need to know that kind of negativity is unnecessary and even uncalled for. You're pursuing your dream and no one has the right to patronize your about it.

2. Read everything. The good. The bad. The crap. You will always always always learn something. And sometimes that thing you learn isn't always about writing. And just because everyone says a book is bad doesn't mean it actually is. You might actually like it. Conversely just because everyone says the books is amazing or a classic doesn't mean you'll like it either. I hate most classics. Honestly I do. I have a degree in English lit so you would think I really like classics and I really do like a lot classics (Poe, Twain, Wilde, Elliot, Wollstonecraft) but I can't stand a lot of classics. But every single book I've read I've learned something.

3. On Writing by Stephen King is required reading. Do it. And don't give me, "I don't like Stephen King" because that's a stupid excuse. Just read it.

4. Stop saying "I wish I could write like...." I know I'm guilty of this. I know at times I've said I would give an organ to write like Harper Lee, Oscar Wilde, Anthony Bourdain, Judy Blume, Dylan Thomas or Terry Prachett. But here's the thing if I wrote like them I wouldn't write like me. I would just be writing like someone who wants to write like someone else and no good can come from that. It might take a while to find your voice, but you'll find it. And it will change to. The writers voice I had when I was scrawling in notebooks at 14 is not the same writers voice I have now while I tippy tap away in Scrivener. That's a good thing. Trust me. Your writers voice will change and evolve and get better and become very much yours.

5. Anyone who tries to tell you there is one method for writing is lying. You'll find what works for you. My method works for me. It involves a lot of index cards and post-its. It doesn't work for everyone. I'm not the kind of writer that keeps a notebook by the bed. Never. I figure, if the idea is good, it will be there in the morning. Maybe you're not that kind of writer. Maybe you will have a notebook next to the bed. Maybe your method will involve writing in long hand only. Who knows. The writing world is your oyster.

7. Your story is important. Your stories are the stories of tomorrow. That sounds like a lot of responsibility but it's a great privilege.  What an amazing thing to put on your "to do" list, write tomorrows stories. Even if you're the only person who ever reads it you'll have gotten that story that has been banging around in your head out.

Above all future writer, just write. Write those words. Get them out of your head and on to the page. However you choose to you do just put them out into the world and see what happens. Trust the process. Trust yourself and trust that your writing is important and that your words are important. The world needs your words.

Much love and many future,

Support the Stories of Tomorrow campaign to rebuild the Young Writers Program (YWP) - a version of NaNoWriMo for students - and make it more AWESOME.
Here's how:
1. Make a donation - https://store.nanowrimo.org/tomorrow
2. Promote via social media using ‪#‎ToAFutureWriter‬, giving advice and encouragement to young people and/or your future self!