An Ode to my Roller Derby Widow

May 19, 2014
T: After my first year in derby you bought me that necklace for not giving up while we were in Montreal.
J: Yeah.
T: So it's been five years in derby. And I haven't given up. What do I get now?
J: A pup tent and a kazoo because the better question is what do I get Tatiana?

This week marks 5 years since I joined roller derby. I attended my first practice and then next day I couldn't walk up stairs...or down stairs....or sit...or do anything quasi-functional without a world of hurt. But I was smitten. Derby has caused a lot of tears and a lot of happy dances. A lot of whining and a lot of excitement beyond words. As derby has evolved and as I've changed and grown as a player one thing has stayed constant, Johnathan, my derby widow.

A derby widow is the beloved partner of a derby player. The person who has to put up with gear in the hallway, the constant smell of tiger balm lingering in the air. The person who at times plays second fiddle of a game and bunch of people who love it more than anyone should probably love something. The derby widow puts up with the derby drama and usually gets voluntold for something on bout day. They are the people who have the most love/hate relationship with roller derby. They love it for giving their partner something that is there own and that brings them joy. They hate it because well it eats their persons life and "I can't I have derby" is constantly uttered.

I know a lot of derby players think their widow is amazing. And all widows ARE amazing. However, I humbly submit my derby widow for sainthood (I do know of one derby widow who deserves super widow sainthood....hi Darcy.)

This boy has had whole teams descend on our apartment for team meetings and dinners in our living room. He's run the score board. helped build a score board scaffold thing (which also required him to disconnect our TV and bring it to the bout.) He's panty wrangled, bench coached, helped with hitting practice and made pulled pork for a National derby team. He spent the Sunday afternoon of the Thanksgiving weekend once running drills and timing laps for me in the Pierson arena as my minimum skills test was near. He's covered for me at family events when I've had to leave early because of some derby related thing in the morning. He's carried gear. Helped downed skaters and is an expert at writing numbers on arms. He's proudly showed people the youtube video of me getting hit in the face at parties. And endured a lot of sideways glances when that hit to the face resulted in a black eye. He's put up with being called John Buster for 5 years (thank you Dennis.)

And that's just the stuff other people can see. He's also hugged me when derby made me cry. Sat next to my mom and explained derby to her at length the first time she saw me skate. He's listened as I vented and pretended what I was telling him was the best thing he had ever heard. He practiced yelling derby names in the car to help me pick the right one. He didn't bat an eye when I told him my derby gear was coming as carry on when we moved here. He sat at the walk-in clinic with me for several hours after I broke my toe trying to keep me from completely falling apart with the knowledge that I would have to be off skates while I healed. He is always ready after practice with a glass of wine.

He does it all. With a smile....and a sarcastic remark.

Now most of this seems like supportive husband stuff. And it is. But what puts him over the top though is what occurred the day we left Canada in 2011. 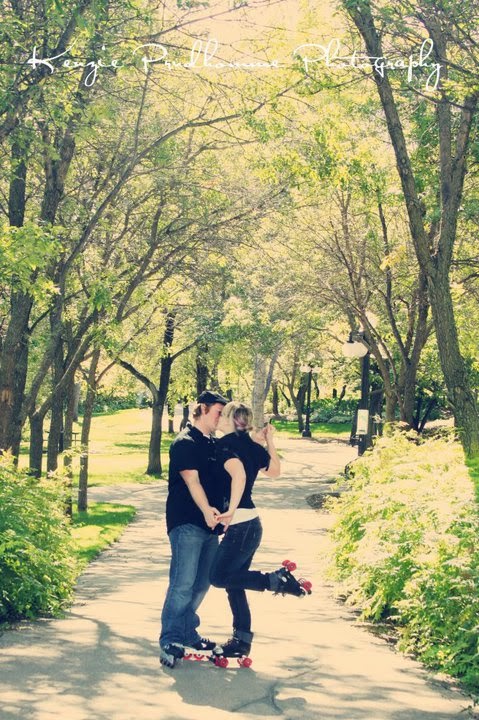 As I mentioned my gear came as carry-on when we moved here. I put all my tools in my checked luggage as recommended by other players but my gear was in my Zuca bag. These bags are designed to fit into MOST overhead compartments. Yes, most. Not all. The older the plane, the less likely it's going to fit. As we found out.

Our flight from Winnipeg to Toronto was delayed by an hour. Not ideal but we still had lots of connection time in Toronto. We get on board and my bag won't fit in the overhead bin or under the seat. Uh oh. The nice flight attendant told me that she would gate check it for me and it could pick it up with the strollers etc when we landed in Toronto due to our international connection. Awesome. She tags my bag and away it goes.

We land in Toronto. We get off our plane. The strollers are there but no gear. Hmmmmmm. Talk to someone they say it should be there. It's not. Talk to another someone and they say, "Oh you have to go get it from the luggage carousel." Pardon? You said it would be at the gate?! So one of us has to leave the secure area, get the bag, get back into the international departures and get to the departure lounge where my dad is waiting for us.

Cue complete and utter meltdown on my part. I seriously lost it. In the airport.

John and I argue about whose going to go get it and who was going to go meet my dad. By argued I mean, I said I would and John kept telling me I was crazy and that he would do it and I should go meet my dad and off he went.

I melted down some more....then called my mom. Yup. Panic and call Mom. That's my motto.

After I finished melting down at her while walking to the international departures lounge she called my dad to give him a heads up on what was heading his way. I found my dad and who immediately instructed me to get a stiff drink and to calm the hell down. So we waited. We checked time. Our cosy layover was turning into a tight connection as John still hadn't resurfaced with my derby gear.

It took Johnathan about 45 minutes to get his hands on my gear and get back into the departure area. He waited a really really long time for my bag. Long enough that he started walking towards the lost luggage desk when he heard a lump and there was a gear. After that he was off and running. Literally. He was turned away at two security gates being told they weren't the right ones. All the while pulling my bag with light up wheels behind him. He finally found a security gate that would let him through. I think they took pity on him when they saw the purple, covered in stickers with light wheels monstrosity he was pulling.

He arrived in the lounge drenched in sweat and breathless. He handed me my gear and said only one thing before he went to use one of the complimentary shower areas in the lounge, "I. Hate. the derby."

Yup. John chased down my gear between flights in a huge airport on the day we moved to Switzerland.

Derby widow for the win.

I'm fairly sure if it wasn't for John and his instance on being supportive of my ridiculousness and occasional completely insane ideas I wouldn't have stayed in derby this long. As much as we like to say in derby it's for the skater by the skater. And yes that is so very true. This skater exists because of her widow.

Thanks for surviving the last 5 years John Buster.