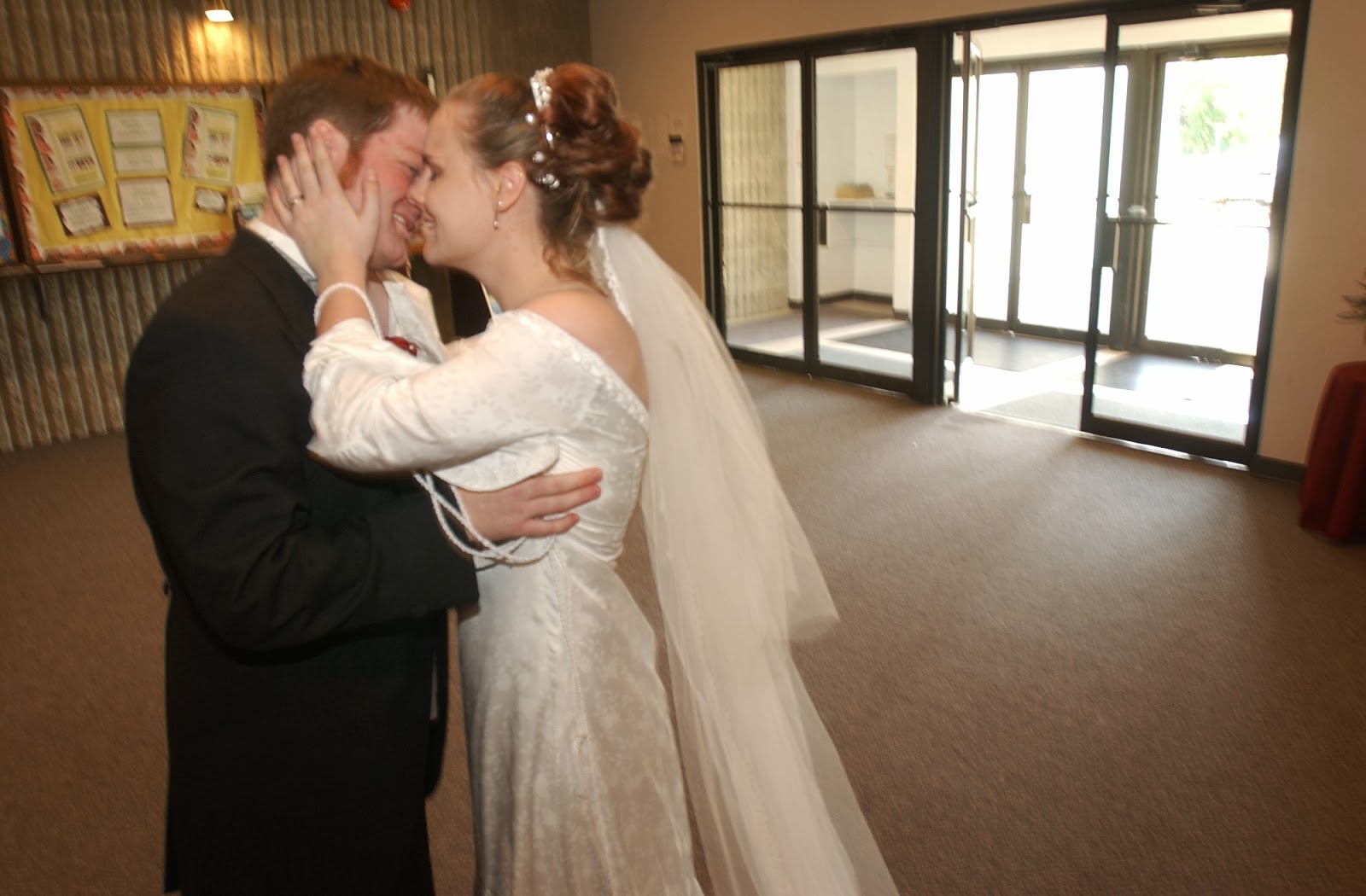 When I married John 7.5 years ago (wow it's been that long?!?) I took on a few things. I took on his family, his friends, his apartment, his lack of home furnishings in said apartment, his inability to sort the laundry, his love of the radio show Vinyl Tap, his personality quirks that made me smile, his habits that made me want to scream, his ups, his downs, his everything.

I didn't take his last name.

As far as I'm concerned the choice to keep my name was mine and mine alone. Just like a woman's choice to change her name is hers and hers alone.

And he wasn't to fussed about it. I think he said it best a few weeks before our wedding when I said, "oh yeah right I guess I should ask you if you care that I'm not changing my name." His response, "you're not asking me to change mine so why should I ask you to change yours?"

Here's the thing, John has known since day one of our relationship I had no plans on changing my name when I got married. No we weren't talking about marriage that early in our relationship. Certainly not to each other. It was a conversation about my ex that brought about this information. I mentioned in passing that my ex never liked the idea of me keeping my name when I married. I had decided as a child I was going to keep my name and as far as I was concerned it was a non-negotiable. My name was mine and if he was going to marry me it came with me just like my collection of happy meal toys and grandmothers aprons.

Here's the thing. John didn't care and that's all that matter. People who weren't us seemed to care about my lack of nomenclacher switcheroo.

"Your children won't know who you are?"

If my children didn't know who I was we would have bigger problem then my last name.

"Don't you think it will hurt John's feelings?"

If he cared that deeply about my name he would say something.

"Not everything you do needs to be a feminist statement."

*roll eyes so hard I get whiplash*

7.5 years on and I still hear rumblings about not taking John's last name. I will let you in on a secret though. I'm not totally militant about it. If someone calls me by John's last name I usually don't correct people. It's a pick your battles type of thing for me.

One battle regarding keeping your maiden name I was willing to get behind though was one author Chris Turner launched against Air Canada and their incredibly sexist voucher policy. His battlefield? Twitter.

Basically he wanted to transfer a travel voucher to his wife. He was informed that he could only do it to family members with the same last name.

As I read that my brain raged!! Apparently Air Canada missed the feminist movement....or the fact that we're living in the 21st century....or the fact that in Canada there is an entire province where it's not allowed to change your name when you get hitched (hello Quebec!) Basically John could transfer a voucher to anyone in his family, hell anyone with the same last name as him but NOT the woman he married.

Not cool. Actually downright insulting. He could transfer a voucher to the son of his cousin who is 1-years-old and whom he has never met. But not me, the woman that he's spent the last 10 years with. All because I chose to keep my name.

Turner kept at Air Canada and many joined in. Soon he heard from Air Canada that they would not only be allowing the transfer to take place but also would the policy would change.

So thanks to Chris Turner, Twitter, and #Surnamegate Air Canada has crawled into the 21st century and according to Air Canada I'm a member of John's family...despite my lack of his last name.

Now if only we can get them to stop losing peoples luggage.

Katy said…
I think it's awesome of you to keep your name! When my husband and I were wedding planning and whatnot, it came up about me changing my name. I liked my name, Katy Williams, and didn't really want to change it, but he kept saying it made him feel sad that I didn't want to change it. I did end up changing it, so now I'm Katy Curran, which is sometimes annoying because people compare it to Katie Couric. Sometimes I wish I kept my name, but Katy Curran has a ring to it now that I say it more often. I also like to think I came up in ranks of the alphabet!

Tatiana said…
It's so strange how other people seem to care way more about this than the people directly involved.
January 8, 2014 at 10:06 AM

Deboshri Paul said…
I've read such a confidence-exuing post in quite some time now. The same battles, the same #surnamegate I faced at a resort in Mauritius where every luxury was offered only in my husband's name creating issues for me. The fact that it never was a matter for him is good, noteworthy 'cause he managed to skip societal conditioning and yet not too special as isn't that just how he is supposed to feel about it anyway - a non-issue?