A little about regret 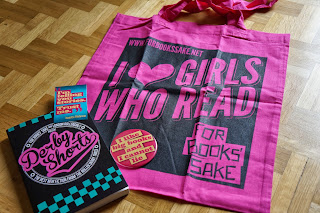 You see the book in that picture? Yeah the one that says Derby Shorts. Right after we moved here I saw on the London Rollergirls facebook page that they were looking for submissions for a fundraising book. They were looking for roller derby short stories. I made note of the submission deadlines and guidelines. I think I even emailed my friend Portage about it. I remember vaguely telling John about it. Although he's fairly sure I never actually told him about wanting to submit something. This is possible. I may have just told him the project existed.

Then I thought about it. And thought and thought and thought. Think. Think Think. Just like Winnie the Pooh. I was at a weird place in my writing and derby career. I had no direction for my writing and I had made the decision to put my derby career on hold for a while. So here I was with the opportunity to write fiction about derby and submit and possibly have it included in the first collection of roller derby short first.

What did I do?

I let the deadline pass and I submitted nothing. Hell I didn't even attempt to write anything. I couldn't bring myself to do it. I didn't think my writing was good enough. I counted days until the deadline and still couldn't bring myself to write a word. I seriously chickened out. Yes the girl who with a youtube video of herself getting hit in the face playing roller derby chickened out. The girl who moved to a new country with 30 days notice wussed out big time.

My brave is pretty damn big but at that point, it wasn't that big. At least not then. I regret little. I was raised to regret nothing. But here I am with this HUGE regret following me around.

Recently another roller derby related opportunity landed in my lap. I was asked to apply for the position of team manager for Switzerlands national roller derby team. Well okay, we don't have a team yet but we're building one and a team manager is required as we try to build the derby presence of Switzerland on a more global scale. Anyway I was asked by my co-trainer here in Bern to apply.

Then cue "awwwwww wow she thinks pretty highly of me."

Then cue dragging my feet about applying. One of my coping mechanisms is to procrastinate. Yeah I know it's weird. But that's how I cope with the unknown sometimes. Then I worry. Then John asks me, "what's the worst that could happen?"

The worst? I could drag my feet long enough I miss out and then have a huge piece of regret to drag around with me. Yeah...I really didn't want that.

The worst case scenario if I did apply? They say no. But at least I could say I tried.

So I tried. I applied. I asked for letters of reference that in the end made me cry with appreciation. I remembered to honour my derby roots in letter of motivation and spoke about my Oma's love for the game. I flat out told them they needed me. Brave as all hell if I do say so myself.

I hit submit and then waited.

When the email came I was home alone. I was waiting for John to show up with our friends from Geneva. We were looking after their little one while they had a bit of a date night. I was by myself when I got the email that asked me if I was interested in being their head coach.

Yes, you read that properly. They wanted to make me their head coach.

Remember I was alone. I had no one to tell. I freaked out. I called my parents. No one was home (this happened when we found out we were moving here too by the way.) I imessaged my best friend Jamie because all of a sudden I couldn't remember her phone number. Then John walked in the door with our friends. I practically yelled it at them.

Much happiness and jubilation ensued.

I am the new head coach of Switzerland national team.

I can't believe it either.

So what have I learned from all this? My brave is HUGE. Regret sucks. And roller derby will continue to give me more than I ask for.

Unknown said…
That is amazing!!!! So happy for you! I think a lot about bravery too. There is so much to be gained by taking a leap but it is not always easy to actually do it and I am guilty of a lot of procrastination too. So happy that all has worked out for you and thrilled that you wrote about it and shared!! Looking forward to reading about all your coaching adventures. You will be great!!!
October 31, 2013 at 11:44 PM

3yearsandhome said…
That is absolutely amazing! Mega amazing! Congratulations! You must be completely thrilled.
November 2, 2013 at 9:27 PM