Things I learned from the Greatest Internet Scavenger Hunt the World Has Ever Seen. 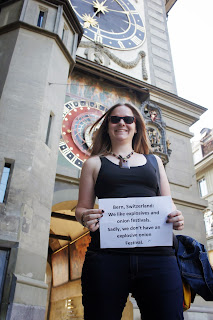 GISHWHES officially ended while I was on my way home from Sundays practice. While I was sweating and making my team do snake drills and try their first whips, my GISHWHES team was submitting last minute hugs, videos and photos.

We managed to accomplish, 81 items.

That's huge for a group of GISHWHES newbies. Did I mention after registration was closed because our team still had spots to fill so our team was joined with another team. So a team of newbies was joined with another team of newbies. Also we were all over the globe. Switzerland, Manitoba, Ontario, Utah, Texas, Oklahoma and Hawaii. Thanks to spreadsheets, email, dropbox and facebook we managed to keep it together. I'm still in awe of what we managed to accomplish in just a week.

Some of the items were a little philosophical such as an image of "rage against the dying of the light." or "the road less traveled by."
Some of the items were mathematically impossible like narrowing the prime number gap to 47 or explaining the proof for the ABC conjecture. For the record...I narrowed the gap...without using math. John, while impressed with my creativity still maintains I did not actually solve anything. Then he mumbles something about being the one with the degree in math and how those with Arts degrees should leave the numerical conundrums to the grown ups.
Some of the items were heartwarming like find someone in your community who is participating in sustainable giving and give them something nice (our team member in Texas went to a restaurant that closes every Sunday so they can feed the homeless and donated some cups and juices and then gave the owner some flowers from our team.) Another one was surprise someone you know with something incredible that they've always wanted. Record a video of you surprising them. I opted to surprise Johnathan. I was going to buy him an awesome chair but I couldn't get it delivered in time. Booo. Instead I opted for something a little more charitable. Johnathan loves orangutans. If you want an earful sometime, ask him about his stance on granting them personhood. He's actually pretty persuasive. I adopted an Orangutan for him through the World Wildlife Fund. 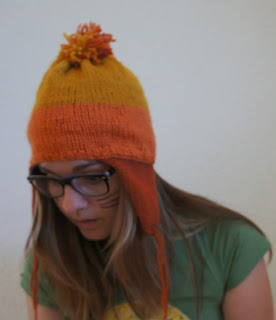 Some of the items were just hilarious like attend a ballet class in full scuba gear, what would a teddy bear hostage situation look like, make a bikini out of tea bags. Stand in front of the most famous building or monument in our town holding up a sign with an alternative tourism slogan. Create a sonic screwdriver and fix something with it.

And so much hugging!!! I want to thank everyone who heeded my call for hug pictures. You helped shatter the world record. The goal was 100,000 pictures, in the end they ended up with 118,000 pictures. Just makes you feel all warm and fuzzy doesn't it.

So what have I learned from this week of silliness?

1. You can get banned from Plenty of Fish for posting a dating profile for a pet.

3. My 20 franc typewriter was a really really good impulse purchase.

4. Sometimes being brave means emailing one of your favourite bloggers/people and making a request that goes down in history as the strangest request she's ever gotten in her inbox.

6. It's super easy to make new friends when you're all trying to do weird and amazing stuff together.

7. John is incredibly delighted when I unleash just how ridiculous I can be.

8. Swiss postal delivery people are consummate professionals. I had to sign for a registered letter. I was in the middle of taking my picture for the team photo. The door buzzer went and I'm sitting there with my silly hat on and whisker on my face. My first thought I kid you not was, "I can't take my hat off, I'll have hat hair and that would be awful." So I answered the door with my hat on and whiskers on my face. I tried to act natural. The nice post lady tried to act like she hadn't noticed. Hilarious all around. Re-telling John of the encounter that evening we were both laughing so hard we had tears.

9. Mixing your playdoh colours is just as exhilarating as I hoped it would be when I was a kid.

10. When thousands of people are doing thousands of things to make everyday life just a little bit more silly, or fun or shiny, it's a beautiful thing. 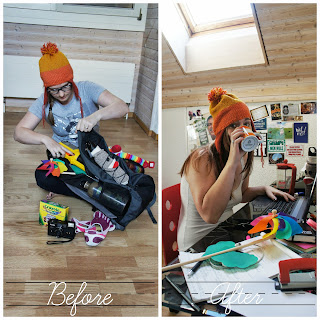 11. I can build a friggin' video game. Sure it looked like it was designed by an 8-year-old but that doesn't matter I did something I never thought I could do in a million billion years.

12. You're far more creative then you think you are.

We won't find out if we've won anything or if we've made the hall of fame for a while I think. Judging is underway but the sheer amount of participants judging will take a little but of time.

Did you have a look at my team video? You should.

Whether we win or not I genuinely don't care. Yes a viking adventure with my best friend and other super awesome and amazing people would be absolutely mind blowing. But here's the thing, I won't be gutted if we don't win that or any of the prizes up for grabs. It would awesome if we won something but honestly I was in it for the experience. I had a hell of a lot of fun doing this. And it was even better that I got to do it with people I really like.

Anonymous said…
Aw! This makes me wish I had participated! NEXT YEAR!!!

Macy said…
My nephew witnessed us taking our team photos. I asked him if he would like some whiskers too and he said "No way! Not unless they stick out like REAL whiskers." haha

Jaim said…
I am so glad you decided to come along with me on this adventure!

Jaim said…
|Agreed! We can use your adventurous spirit! If you have facebook, we have a preliminary group started so that we're ready for next year with a full team of our own choosing!
August 20, 2013 at 5:47 PM