An letter of introduction 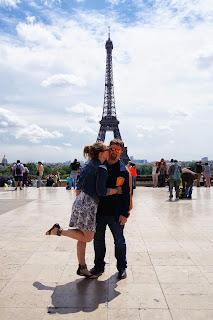 Dear She who has not been named,

Okay....you have been named....but when I started this blog post you hadn't been and well I thought the salutation was cute...so I left it.

Hi there little one! Those two idiots to the left are your Uncle and Aunt. Your Uncle is your Moms oldest brother. Let me start off by saying, your moms family is actually pretty cool. You're lucky to have them...and we're super lucky to have you. You've arrived in a family that just LOVES newcomers. No really. They do. Sure they found me highly suspect but that had more to do with the idea that I was in love with your Uncle Johnathan of all people. And you're way cuter than I was when I first arrived in this family so you're not going to have a problem with at all.

However, I will say, this family likes to ask questions of the newcomers. A lot of them. So have a few prepared answers on some note cards and you should be fine when the inevitable interrogation happens. I'm sure your big sister will help you out with that.

So I guess I should introduce us formally.

Your Uncle Johnathan, he's pretty cool. He travels a lot for this job he has and because of that you'll get things from the countries he goes to. You see he and your mom had an Uncle like that when they were growing up. He would send them and your other aunt and Uncles cool things from around the world. Your uncle Johnathan has taken on this job for himself. He's so pleased he gets to be that Uncle for you and your big sister. He actually just emailed me a little while ago from Singapore saying he found you a present already. Whether he bought it there or in Cambodia I don't know but what I do know is that he was super excited to tell me he already found your first gift from a far flung place.

As for me, your Auntie Tana (my name is actually Tatiana but we won't worry about that until you're old enough to speak in sentences if ever.) Well I'm told I'm pretty cool. I don't travel as much as your Uncle does. What I do is write. People give me money in exchange for words. Basically this is the job I've wanted since I was a wee tiny girl. Not as wee tiny as you right now but pretty wee tiny. I'm also the one that keeps buying you and your sister clothing. When I found out this morning that you were finally of this world I did a happy dance in my jammies.

So you're probably wondering why we're writing you this letter rather than joining the flood of people wanting to welcome you to the world and just having a chat and a cuddle with you in person. Here's the thing awesome little girl who has turned your burly farm boy Uncle's heart into a pile of goo, we live far away and on days like these, it feels like to far away. You see your Uncle John had a bad day at work and to make himself feel better he decided to send a letter and a list of all the things he was good at to a place in Switzerland that was looking for a guy like him. They thought he was pretty great and asked us to move when your big sister was about 9 months old. And we've been here ever since. You're not going to know us by sight or sound or presence but by mystery boxes of awesome global trinkets, a computer screen and that fun bloop noise Skype makes when you call someone.

It won't be this way forever. One day we will meet. We'll get to see you in 3D and you'll get to see us without hearing the skype bloop beforehand. Until then little one know that if we could be there to shower you in cuddles and kisses we would be. In an instant.

Love you all the way from Switzerland,

Super big congratulations on the coming addition to the family :) And thank goodness for Skype, right?
August 31, 2013 at 10:26 PM

3yearsandhome said…
Congratulations on the latest addition to the family. It's times like this when being abroad really sucks. But, as the niece of aunts and uncles who lived abroad when I was young, I can confirm that you will be the most exotic and awesome aunt and uncle ever because of it. Here's to Skype for getting us through the tough times.
September 2, 2013 at 8:14 PM

Anonymous said…
How sweet! Congradulations on your sweet little niece!
September 13, 2013 at 12:35 AM