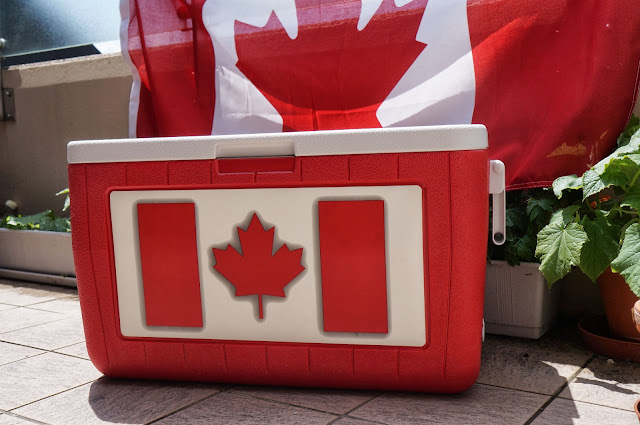 So I've been keeping something from you all. It's probably not what you think.

I'm not with child.
I have not been offered a book deal.
I'm not running off with Benedict Cumberbatch....yet.

It all started on the evening of my Dad's birthday on June 10th. I got an amazing email.

In honour of Canada Day, Canadian Tire wanted to show expat families living in Europe support by providing Canadian Care Packages. The goal of the program is to bring Canadians abroad a taste of home so we can all celebrate by waving a Canadian flag no matter where in the world we are. They thought John and I would be perfect for this initiative.

I emailed them back immediately and said, "YES!"

I figured this would be your standard “We send you stuff and you blog about it” arrangement. I would be expected to take a few pictures, write a couple of blog posts and social media shout outs and all would be well.

Oh how happily mistaken I am sometimes. The email I received the next morning rocked our little corner of Switzerland something fierce. A Canadian Tire Ambassador would be on my doorstep in a few days to share a Canada Day surprise with us.

I read the email on my iPod touch while I was still in bed. I stumbled into my living room half asleep and thrust my iPod into my Dads hands. "Read this Daddy and tell me it says what I think it says!" He confirmed what my sleepy brain had thought it said. People were coming all the way to Switzerland bringing a little taste of home.
Whoa.

Many emails and one Skype chat from the bathroom floor of a Parisian apartment later it was all arranged and Shana the Canadian Tire Ambassador was set to arrive on my doorstep on the 17th. Shana was going to be spending a week traveling from Bern to Jurbise in Belgium and then finally to Wolfenbuttel, Germany, she was chosen to go on this amazing whirlwind adventure. How incredible is that? Apparently she was as blindsided by all of this as I was.

You can learn more about Shana and her awesomeness by watching this great piece done by Global News in Toronto.

Being the uber polite Canadians that we are John and I met Shana at her hotel in Bern to make sure she got to our apartment with no problems. The last thing you want to do is try and find an address in a maze of apartment building in a foreign country when you’re jetlagged. Trust me.  The whole way she lugged this mystery box. I don’t know what was stronger, the excitement or the curiosity. There were pieces of home in there and I was dying to see what they were.

When Shana pulled out the big Coleman Cooler with a Canadian flag on it I got a little emotional. When you live surrounded by a different red and white flag than your own you have a tendency to get a little weepy when you see YOUR red and white flag.

It was packed with everything we would need for a Canada Day barbecue; Flags, hockey pucks, hats, water bottles, glow sticks, cooler bags, lanyards and, t-shirts. Amazing stuff that would make celebrating Canada Day 6000 km away from our home and native land  easier . John was oddly excited about the Canadian Tire water bottles. No not the metal ones, the plastic ones with the Canadian Tire logo.

We made sure to send them off with plenty of pictures. As quickly as the email appeared in my inbox on June 10th it was all over. We saw them back to Bern and off they went. I would have loved to show them around a little bit more but they were going to be flying from Zurich to Brussels later that day to bring another bit of home to another Canadian family living in Europe.

A large part of this entire experience was sharing our Canadian roots. The fact that I've lived all over Canada (thank goodness my parents were visiting when this all happened so I got my dates and locations right) and the fact that John is a born and raised small town boy from Pierson. Yes, don't fret, family-in-law. We were super clear he was from Pierson and not Winnipeg.

Thanks Canadian Tire for thinking of those of us who would love to be home this July 1st. For 90 years you’ve been helping Canadians celebrate Canada Day and I am so very touched that you’ve reached out to those of us who find ourselves very far away from the “true North strong and free.”

And Shana, thank you so very much for showing up with that mystery box full of home. I so wish you could have stayed longer so I could share our new home with you but I am so thrilled you got to have this amazing adventure and bring the same joy we felt to other Canadians in Europe.

So this Canada Day no matter where you are in the world I wish you a Happy Canada Day and raise a glass of Canada Dry to the places we have deep roots but also to the place we currently find ourselves calling home.

So the result of the picture taking and filming?
This. Have a look. Maybe grab a tissue.

Unknown said…
LOVED your post. Missing Canadian Tire and all that is Canada on this day especially. How lucky for you to have that experience. I enjoyed the video (so Canadian) and I may have shed a tear or two. It was lovely!
HAPPY CANADA DAY!!!!
July 1, 2013 at 9:04 AM

Janise said…
Stopping by from THE Collective Social Blog Hop to say hi. Thank you for linking up. Have a fabulous day!

Christine said…
How awesome is that?! All the things we take for granted...

Sadly, I'm not seeing your video links. Could be the iPad. I'll check it out on the laptop sometime.

Loving your blog. Glad your mom hooked me up. I'm looking forward to chatting with her in person when she gets back home and hope to meet you in person someday when you make it here to visit her.
July 11, 2013 at 12:28 PM