That time I agreed to do something with my best friend before I knew what it was. 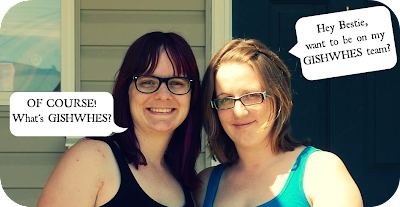 While the picture above is over a year old (boooo living 7000 kms apart...in different countries...on different continents....) the conversation is a mere few days old. Because we're best friends we ask each other to do ridiculous stuff basically all the time. And we usually agree to do it...no questions asked because that's just how we roll. We agree to do epic stuff and then we ask questions. Seems about par for the course when it comes to best friends.

Jamie imessaged me asking if I wanted to be on her GISHWHES team. I said YES and then I asked what the heck was GISHWHES.

GISHWHES is a 3-time Guinness World Record breaking scavenger hunt hosted by actor Misha Collins. It is comprised of a global community of thousands of individuals (94 countries and growing!) that "gather" for a week online once a year, form international teams, and then go out into the real world and create "art" the likes of which the world has never seen. Last year we broke the Guinness World Record for the Largest Scavenger Hunt with 14,580 participants!We've created a team and we're looking for 13 more team members. I told her I would put it up on my blog not only to tell people about our most excellent adventure but to recruit people to our team. We need you and you want to help us do something amazing for a week in August. The 11th to the 17th to be exact."But I live in a different city. How is this going to work?!"Glad you asked, location doesn't matter. Everything is submitted online. Basically once we get the list of items we will divide them up based on who can do what, who wants to do what and who will have the easiest time accomplishing stuff. So say there is an item that requires travel to a location in say, Switzerland, obviously I'll do that not someone from outside of Switzerland...unless someone wanted to and then they could visit me and that would just be grand. When does this all happen?This year the hunt will run for 7 days commencing on August 11, 2013. On the 11th, we’ll post THE LIST on the website which includes hundreds of items or actions that must be made, found or accomplished, and then photographed or filmed and uploaded to youtube or imgur with the link to the content submitted on our website. It sounds complicated but the Hunt website is easy to navigate and use.What kinds of items are on the list?Previous years’ items ranged from “random kindness items” like “Take a picture of you hugging a War Veteran” or “…giving coats to a homeless shelter” to sublime items like “Take a picture of a stormtrooper cleaning a pool next to a sunbather” or “create a 2-foot tall seagull made entirely from sanitary napkins”.How do we win?Winning is based on a point system. Points are given for things like creativity and originality. It's NOT about which team completes the most tasks. What do we win?Grand prize is an all expenses paid trip to BC for a Viking adventure. The rest of the prizes you can find here.How much does it cost to pariticpate?The basic is 10 bucks. This is donated to the non-profit Random Acts which was established by Misha Collins. But there are different registration levels where you can give a little more and get some cool rewards for helping out.

How do I join your team?

email me at thedubioushausfrau[at]gmail[dot]com....or just click the handy little envelope at the top in the side bar. I'll let you know how you can join our team....come on....you know you want to. The more geographic locations the better. My bestie is in Manitoba and I've in Europe so a few more Europeans and a few more Canadians (psssst to friends in other provinces) and a few Americans would be awesome!!