My godchildren are very into Lego right now which makes my heart happy. I had the best time making custom mini figures for them at the Lego store in Berlin. To feel a little connection to them from so far away John and I collect Mini figure sets. At 2.50 chf a pop it's a small investment that gives us a bit connection. They line the area in front of our TV. They make us smile, think of our Godchildren that are incredibly far away and occasionally offer me something fun to photograph.

A few days ago I was browsing Lego sets at our local toy store trying to pick one out for my Goddaughters birthday. Her mom (my best friend) is coming for a visit and I was going to send it home with her. Now I have to think of something else. Now I'm thinking of getting rid of my little collection that connects me to my godchildren. Now I'm disappointed in a company I have supported for years.

Recently a story it the Canadian news about a gentleman and his daughter being turned away from the Legoland discovery center in Ontario, Canada. They were turned away because they did not bring children with them. According to official Legoland Discovery Center policy no adult will be admitted if they are not accompanying a child.

According to their General Manager their first priority if protecting families. Also, they "understand that people might feel discriminated against because they don’t have children or cannot have children."

Try absolutely are being discriminated against.

I do want to make something clear. This policy appears to be in affect at Legoland Discovery centers NOT Legoland resorts. Apparently my childless self and my husband could show up there, spend our time and money and not be turned away if we don't bring some kids with us. However if we go to one of the discovery centers we aren't welcome. Yeah, our money is no good at Legoland Discovery Centers if we don't accessorize with a child. Which leads me to wonder about how this makes an good business sense. John and I don't have children therefore we have more disposable income than some of our friends who have kids. We would probably spend more than our child encumbered friends. So really turning away potential big spenders just doesn't make any sense to me.

But neither does Lego branding child-free adults as predators.

Sure some of the places have "Adults only" nights. But something about that doesn't sit right with me. It kind of sends that message that as an adult Lego fan you need to be segregated.

So what am I going to do about this other than writing a bitter blog post?

I'm going to fire back with my wallet because apparently my child-less money isn't good enough for Lego. We had hoped to go to Legoland in Germany at some point while we were living in Europe but given that we're only welcome at some of their establishments not all of them we'll probably spend our money at Euro Disney instead where the fact that we don't have kids doesn't seem to matter. And as much as it sucks, I'm not going to be buying any more Lego. No more mini figures that make me feel connected to the godchildren we miss like crazy. No more sets for their birthdays or Christmas. Instead we'll think of something equality cool and something that will continue to inspire their desire to build and create things. Something from a company that doesn't brand their child-free godparents as a threat.

As for what I'm going to do with my existing lego stuff. I'm not sure yet. I'll probably pass it on to my godchildren of awesome and hope that one day they'll understand that their Godparents collected them to feel closer to them when they were off having their adventure in Europe. 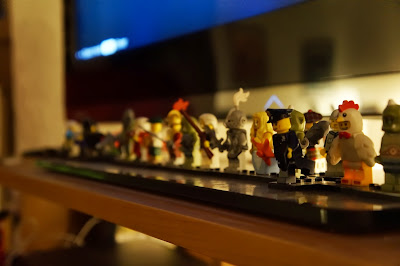