Of grandparents and grocery stores

May 29, 2013
It's been 14 months since my Oma passed and I still miss her with every ounce of my heart. Most days my missing her take on the form of smiling about something that makes me think of her. Like John washing a plastic fork or hearing people tell jokes in German (she and her sisters told the BEST jokes to each other.) Then there are those rare days where it hurts still. Like when I see an Oma greeting her grandchildren on a train platform with joy and hugs. Or when I saw a little old lady offer to buy a little guy a lollipop in the line at the grocery store (the father thanked her for her kindness but said giving it to him after he'd whined about not being able to have it would teach him a bad lesson....Swiss parenting win!!!) Or yesterday at the grocery store. I saw three little girls helping their Oma's with the grocery shopping.

My heart got sad. So very very sad. Mostly because I remember grocery shopping with my Oma being one of the best things in the world. If I was good she would let us pick out a treat from the bulk bins. Only one scoop! Or if they were on sale, we got to pick either a box of Popsicle or a box fudgesicles. One or the other...not both. 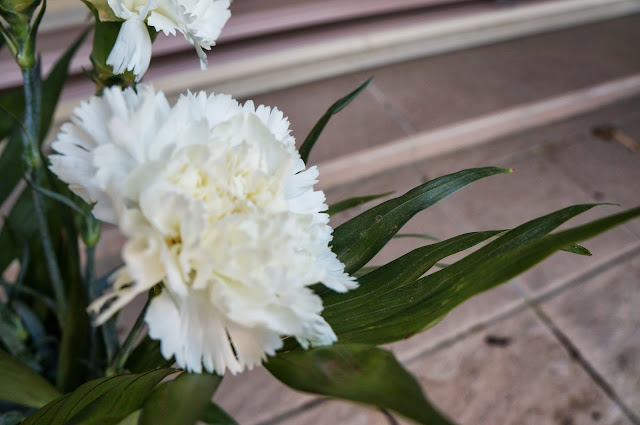 I was lost in my own memories and my music (yeah I'm one of those people who listens to their iPod in the grocery store.) I chucked things in my basket. I wanted chips but I got snack cucumbers instead. I wanted gummy bears but I got bananas instead. The freshly made you bake pizza were on sale but no I bought one of their in store made salads for lunch instead. Wow being a grown up sucks sometimes.

I watched one of the Omas get her granddaughter something off the chocolate shelf at the checkout and I fought the urge to tell that little girl to love her Oma extra hard because one she's going to be a grown up and she'll be buying veggies instead of Callier with no Oma to sneak her that extra treat. I wanted to tell her to hang on her Oma's every word because one day her Oma might lose her words because of a stroke and you may only get snippets once the dust has settled. I wanted to tell her to hug her Oma extra hard because the last time I hugged my Oma I didn't know that was the last time I ever hugged my Oma. I wanted to tell her to  enjoy every single second because one day all she'll have left is her memories and a basket full of grown-up food with no Popsicle in sight.

I haven't missed her like this since the days following her passing last March.

I paid for my healthy choices and started to leave. I was walking through the floral department on my way to the door and I thought maybe I would get myself something pretty to lift my spirits. Among the abundance of roses, calla lilies and a succulents I found carnations. Not just any carnations, white carnations. 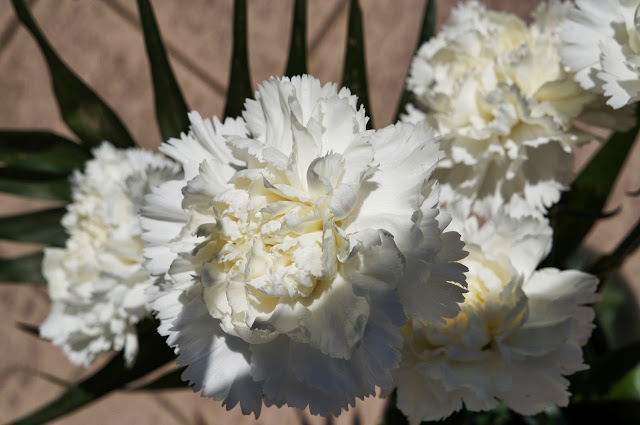 My heart stopped. I haven't seen carnations since moving here. And trust me. I've looked. There in the middle of the floral department of my local grocery store was something I associate so closely and so dearly with my grandparents.

I don't know how they do it but my grandparents show up in my life when I least expect it and when I need them most. The only bunches left, all two of them, were white carnations. 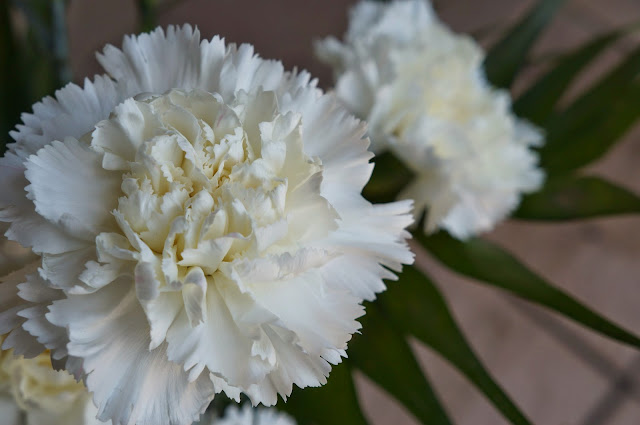 As the nice lady at the counter wrapped them she asked if they were a gift. I just smiled and said, "they are a gift for me." She laughed and then gave me a complimentary little piece of chocolate. She said it was for my walk home. Yup, free chocolate. My grandparents were all over that moment in the grocery store.

I walked home feeling lighter. I put them in a vase and stood back. Oma and Opa were still getting me treats at the grocery store after all.

Anne Marie said…
You and I need to talk about this you making me cry at my desk thing. Not cool, love.

This was absolutely beautiful. I am glad your grandparents are still giving you treats in the grocery store - the whole time I was reading this I was thinking "Tatiana, go buy the fudgsicles!" But this ending was way better.

HomoHausfrau said…
I have tears in my eyes and goosebumps all over. Your grandparents were definitely there!

Jaim said…
Blogger has eaten my response 4 times... I tried responding back when you posted this.

I love that your Oma is still watching over you and letting you know it. She was an incredible woman.