May 30, 2013
I've known Macy of Pioneer Artisanworks for well over 10 years and consider her a dear friend. When I came up with idea for a guest post she was just as excited about it as I was which is awesome. So please, enjoy her words. 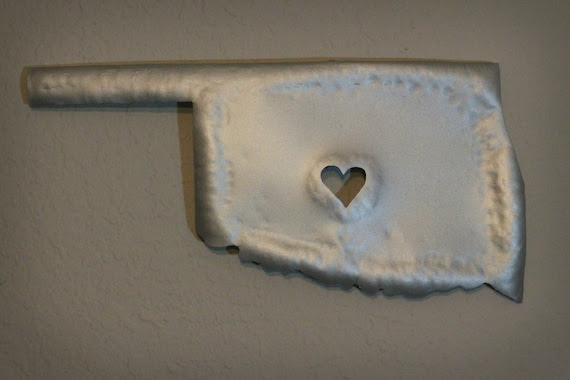 You've probably heard by now of the horrific damage caused by tornadoes in Oklahoma just last week. It is a strange feeling to hear the name of a town we drive through almost daily, spoken about on CNN. It's an even stranger, haunting feeling to drive through that town now and not be able to recognize parts of it anymore. I watched this video taken from inside one of the elementary schools as it was hit by the tornado. I just wept through the whole thing. You can read more about my personal account of the Moore tornado here.
Three years ago, in May 2010 (May is not the month to plan a visit to Oklahoma, btw) I was living in Florida, and I received a call from my momma. I cheerfully answered "Hey mom--" only to be interrupted by her shaking voice-- "Macy, it hit us. We lost EVERYTHING." My whole body went numb. Except for my heart, it twisted and pulled in painful ways I'd never experienced before that day. Thankfully, everyone in my family was safe. Including my dad, who didn't even make it into the shelter in time (he's a meteorologist so he was watching the storm closely) but he stood in the hall closet, shoeless, holding the door closed with all his might.
Due to insurance they were able to buy their dream home on a ranch in the country and it truly could not have had a happier ending. You can watch a video I made about it here. However, before that happy ending--before I knew everything would be okay-- I was stuck 1200 miles away feeling helpless. Then something amazing happened. Friends, family, church members, strangers....they all surrounded my family with an overwhelming amount of love and support and donations. They offered help in such a multitude of ways that I could never even list it all at once. They just showed up and helped without anyone having to ask.
I live here in Oklahoma now. The beauty and kindness of the people here has always felt like home to me.The tornadoes ripped through last week, and the biggest one--the one you probably saw on CNN--happened 8 miles from my house. I feel helpless this time around too. Until I remember all of those things that people did for my family in 2010. So I scheduled appointments for Joe and I to donate blood. Then, when the coast was clear for volunteers, we both went in and helped clear debris and sift through the rubble to salvage their personal belongings. In one particularly bad neighborhood, a large group of us worked for an hour or so in one small area, and at one point I found Joe and whispered "It looks exactly the same as it did an hour ago." Layer upon layer upon layer. It was hard work. It was humbling. It was emotional. But it made a difference.
I think that when the news cameras pan past piles of rubble, you can clearly see that it is a scene of destruction and chaos. But it doesn't really hit you as hard as when you've seen the cozy home it used to be. I remember the first time I saw this photo of my parents' living room. 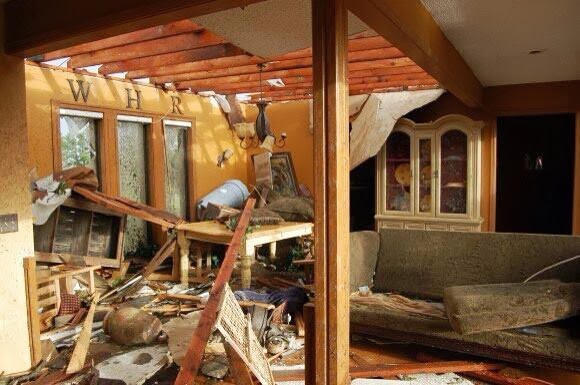 It was just unreal to think about the family Christmases that had taken place in front of that fire place. Or the rounds of Monopoly played at that dining room table. Or the naps that had been taken on those couches. So as I sifted through the rubble in Moore over the weekend, I kept that in my mind. These are not random piles of debris. These were homes. Safe havens. People gathered here with their families. People survived here. People died here. It's not really about the structures---but about the people who are broken, hurting, confused, angry, lost.....
I think no matter how much I help or do or give, I will always feel helpless in situations like these. Joe and I started Pioneer Artisanworks because making art is what we know how to do. It is healing our broken hearts to be able to share that with others to help in any small way that we can. So we made this little piece we've titled "Heart of Moore". 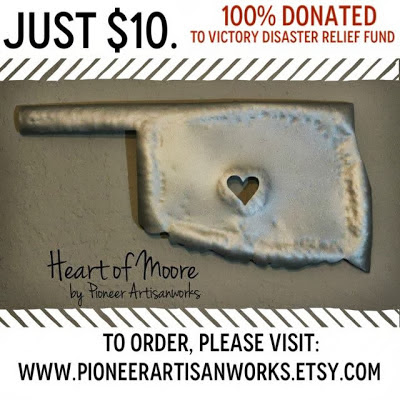 If you're looking for a small way to help out, consider ordering one. All of the money goes to the Victory Disaster Relief Fund. You can place an order by following this link. It would make a bigger difference than you even realize. It started with Joe and I making this piece of art... kerplunk!....and it has rippled its way across the pond, raising $225 for disaster relief so far. So thank you. To those who have donated, prayed, cried, or just offered a listening ear.
You matter.
You aren't helpless.
You help make Oklahoma Strong.