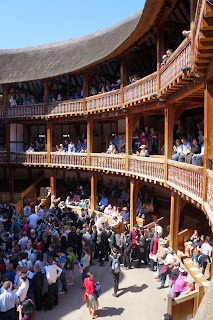 Let me drop some Shakepeare knowledge on you. Aka let me prove to you my English degree is good for something.

The Tempest is considered by many to be the most accessible/understandable of Shakespeares work. It's one of the comedies. It's also thought to have been written at the height of his career.

You are probably familiar with The Tempest and don't even realize it. If you watched the opening ceremonies of the London Summer Olympics. Kenneth Branagh quoted from Calibans soliloquy at the beginning of the industrial revolution part;

Be not afeard. The isle is full of noises,
Sounds, and sweet airs, that give delight, and hurt not.


Will hum about mine ears; and sometimes voices,
That, if I then had wak'd after long sleep,


Will make me sleep again; and then, in dreaming,
The clouds methought would open and show riches
Ready to drop upon me, that, when I wak'd,
I cried to dream again.

It was also recited by Geoffrey Rush in The Kings Speech. There was a film adaption in 2010 with Helen Mirren, Russel Brand, Chris Cooper and Alan Cummings. Oscar Wilde mentions the character Caliban in the preface of The Picture of Dorian Grey.

Essentially The Tempest is about a shipwreck, magic, slavery, betrayal, love at first sight, family relationships...and drinking. And it's my favourite of all the Shakespeares work.

Now let us step into the way back machine for a moment.


On a warm summers evening in 1988 (neon and fanny packs were still all the rage...much like now....*shudder*) my parents grabbed some snacks, some stuff to keep their 4-year-old and their 6-year-old entertained, a picnic blanket and headed to the park. I don't remember being told what we were doing other than the fact we were going to see a play and it had someone who worked at the day care I went to in it. He played Caliban if I remember correctly. I just know what happened that night set the tone for the rest of my upbringing and pretty heavily informed where I would later end up in life.

That day a family tradition was born. That night a love of literature was born. And a love of theatre. That night I saw Shakespeare for the first time. Before I was 10 years old I had seen The Tempest, Much Ado About Nothing, Romeo and Juliet, A Midsummers Night Dream and, Twelfth Night. All at city parks, in the summer for Shakespeare in the park. I've tried to keep up the tradition as best as I can since then. 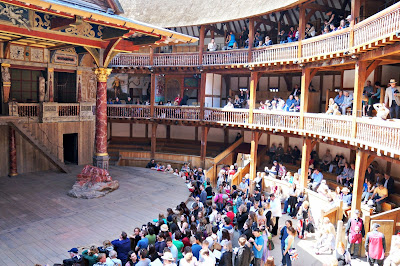 I can hear you now, "who takes a 4 year old to The Tempest?!" My parents that who. They have always made sure my brother and I get a really well rounded upbringing especially when it came to things like culture. I remember going to Art Galleries, museums and Sunday afternoon concerts put on at the University. When money allowed we were taken to the theatre. Sure we did other normal family things like the Zoo and bowling but with a healthy dose of cultural enrichment to go along with an occasional trip to the amusement park at West Edmonton Mall (which in MY DAY wasn't called Galaxy Land...just saying...)

The great thing about Shakespeare in the park was that it was free. They did a goodwill donation type thing at the end (I remember being given change to put in the box) and sold concessions (hooray for brown paper bags of popcorn) but it was free and a way to expose us to culture and literature and the arts without spending a lot of money. I think is is basically the reason now I had such a hard time paying for things like admission to Galleries and museums.

While John and I were in London at the beginning of the month I took it upon myself to find out what was going on while were there. The 39 steps was still running so we wanted to see that again for sure (that's how good that play is, John paid to see it twice) but we wanted to see something else. I campaigned to see Wicked again to no avail. I suggested Les Mis but there were no tickets to be had. Then while reading the paper in the flat we rented with John's parents I found an article about the woman who came in second in some sort of talent search show that was looking for a new Nancy in the British production of Oliver. She was making her globe debut in The Tempest as Miranda.

The Tempest. At the Globe. In London. While I was there.

I didn't ask if John wanted to go. I informed him we were going. There was no way I was leaving London without seeing the Tempest. Thank jebus John is use to these sorts of things with me and happily agreed it was a smashing idea.

We had lunch at The Swan before John unleashed me on The Globes gift shop. Let me just say, the burger I had there made me want to weep it was so good. Then I discovered it was made to order using a green egg and I just about died and decide this was probably the greatest restaurant ever (by the way, they do their pulled pork with the green egg as well...just saying.)

Upon entering the gift shop John immediately started feeling a pain in his wallet and had to talk me out of the tempest shot glass and the bottle of official of Macbeth stage blood. I was a kid in a candy store. Okay...I was a nerd in a geeky gift shop.

We made our way to our seats. We had seats in the middle section of the middle balcony. I know that sometimes the best seats are actually the 5 quid standing "seats" but I wasn't about to stand in the sun for 3 hours. We sat down and I looked at John and cried.

Yes, I cried. Before the show even started. I cried. At 29 years old I cried in Shakespeares Globe.

John couldn't figure out what the hell was wrong with me. A dream of mine was coming true. The Tempest at the Globe was about to happen. I finally put a sentence together, "I've come a long long way from a 4 year old on a picnic blanket in the park." I suddenly had this overwhelming moment of, "look at where I've ended up!" I was completely dumbfounded. I couldn't believe the places that little 4 year old in my memory had been that eventually led her right back to a place that was so tightly connected to one of her earliest and fondest memories.

As I sat there fanning myself with my copy of the program (which is slightly more professional than the one I have from the 1988 production) I basked in the language and the magic that unfolded before me. It was like seeing it for the first time all over again. It wasn't as mind blowing as the first time. My parents always boasted that they brought all these things to keep us occupied just in case we got bored but they didn't need any of them. But it was still basically perfect.

Only down side...there was no popcorn in brown paper bags at the interval.

about me childhood dad England Growing up Mom Shakepeare The Tempest

BavarianSojourn said…
Fantastic! Love the sound of The Swan somewhere I haven't been yet! I do love The Globe though, The last time I went we saw Richard III, and it was almost like we had time-travelled back to the 16th century, were it not for the tourists that surrounded us with their McDonalds bags! :D
May 22, 2013 at 9:43 AM

This sentence made me choke up: "Yes, I cried. Before the show even started. I cried. At 29 years old I cried in Shakespeares Globe."


I DON'T BLAME YOU!!!! What an awesome experience for you!

I have a feeling that I will cry when we get to Sweden in December and my lifelong dream of going to the place my entire family is from coming true will just be too darn much!
May 23, 2013 at 6:03 PM