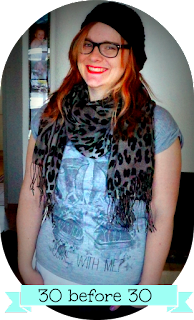 I am 311 days away from turning 30. And I've got stuff to do! I've managed to complete a few more things and make some headway on some other stuff. It's kind of exciting actually. Even more exciting is the idea that I might accomplish a few extra things on top of what is already there. Sure I accomplished number 28 in Rome by seeing the coliseum but next week I'll be in London again and we have a day trip to Stonehenge planned. So yay for seeing 2 world wonders before I am 30. John also fears number 30 will turn into seeing as many libraries on that list as possible. He may or may not be wrong.

16. Get business cards for my blog - completed April 15

I've been mulling this for a long time. I've written down my blog address for people or had people write it down. I've also had situations where I just hope people remember it because the blog name is catchy. I designed these sometime in February using Moo Cards and then sat on it until I ordered them at the beginning of April. Why did I wait?

I was afraid I was getting to big for my britches. In the grand scheme of things my blog is pretty small potatoes in world of blogging so I didn't want to come off as thinking I'm way more important than I actually am. But here's the thing, as I move forward in my writing and blogging I am doing way more networking than I ever thought I would using this blog. But when I thought about it, my blog as become an online portfolio of my writing so business cards have kind of become necessary. Another reason I waited was because moo cards can be a bit pricey so I waited for a sale AND a promo code. I got them for 20% off during their spring sale AND I got free shipping. They were here super fast as well. The eta for their arrival in my mailbox was May 1. I got them April 15th. Most excellent.

17. Write the frame work for my novel - Completed March 31

There are two kind of people in the writing world, planner and pantsers. There are those that know exactly what is going to happen every moment of their book from beginning to end due to some sort of organizational system like index cards, spreadsheets, beat sheets....basically items that are foreign to me because I fall into the pantser category. Recently I read something rather profound. A writer isn't someone who writes, a writer is someone who finishes what they start. Oooooooh. Lightbulb moment. I start a lot of things but they generally fizzle out pretty quickly. I've been trying to put my finger on why. Then I thought lack of planning might have something to do with it. Or as we like to say around here, "I don't think this plan was very well thought out." (gold star if you know that movie reference.) So I decided a plan was needed. I would use Camp NaNoWriMo to see if I could actually plan something. Well really it was my excuse to plan something. I  spent two days in my office (aka the word mines) with a stack of multi coloured index cards and some writing instruments and I hatched a plan. At the end of it all I triumphantly beckoned John to my office so I could yell "TADA!!!!" and show him my plan in a very Vanna White way as it was plastered to on of the big empty white walls of my office. He was impressed. I was impressed. We were all impressed. But did it work...for about a week. Then we got visitors and I did some writing at night. Then I wrote for the three days we had between visitors and then we got another round of visitors and again I tried to write a little at night. Now we are visitor free and I'm trying to get back into writing before we take off to London on Sunday. So plans they work. Plans to write a whole lot while you have lots of visitors they don't really work. However, here's the neat things about this plan...it's still good. It doesn't expire. So Camp NaNoWrimo may be a bust for me and I'm okay with that. Completing was never the goal, trying something new was.

I'm an email hoarder. No really I am. You never know when you'll need that three year old shipping confirmation or that hotel reservation or that facebook notification of a friend request. I still had the email about my fresh meat recruitment night from when I first join WRDL. Yeah. I needed to do something about the mess in my inbox. So I sat down and started deleting. I was ruthless. I kept a few old emails from dear friends that I sometimes read when I'm home sick. I kept a few old emails from when I was the director of Marketing for WRDL because there are some handy bits of information in them. But a lot of stuff went. It's nice to declutter your online life. Now if only I could have the same merciless resolve when it comes to purging facebook friends.

1. Apply to the Glimpse Correspondents Program - applications open May 1 so I'm waiting not so patiently to get this process started.

5. Successfully grow tomatoes - seeds have been planted and they've sprouted. So now we shall wait and see if I kill them or not. John's rules of gardening are, "Tatiana only looks at the seedlings...never touches."

22. Complete my online portfolio - it's a work in progress and it always will be. That's the nature of portfolios. So really what I'm aiming for is something I'm proud of. I have say I've started using my flickr account for my photographs and I'm becoming way more diligent in putting links for my other work on my sponsorship page. What I am hoping to do eventually is to consolidate it all on one page of this blog.

25. Do the Montreux wine hike - how can a hike be underway?! Well I discovered the start of the hike when I was at Chillion castles with Llama two weeks ago. Turns out we had done an hour of it without even realizing it. Go figure. So John and I are hoping to go back in a few weeks and do more of it.

6. Master the Art of my East German Camera. - I'm having film loading issues right now. I'm doing something seriously wrong that I can't figure out. So I've pulled out the manual again (in all its 1970's glory) and hopefully I'll get it figured out so this stops happening.

9. Successfully saber champagne - It didn't go well. Let's just say for our next attempt we'll use champagne and champagnes often overlooked cousin prosecco. It was just not fizzy enough (this may have had more to with the fact that it was cheap than the fact that it was prosecco.) I managed to break the glass but the cork didn't pop. John had to use a cork screw to get it out. So it was 50% successful.

BavarianSojourn said…
I love your lists, I am always jealous of organised people who have great lists! Have fun in London. I hope you enjoy Stonehenge, but if you ever get the chance try and visit Avebury, that is by far my favourite and it's not that far from there... :)
April 24, 2013 at 9:13 AM