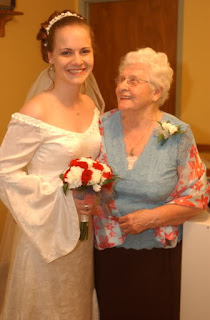 Johnathan suggested I write you this letter. I was telling him how much I missed you and how I hate the fact that in a year you've missed so much and he just said, "write her another letter." Such a smarty pants that guy is.

I wrote you a letter on this date last year fully knowing you would never make it to another birthday but totally embracing the incredible life you had lead up until that point. As much as I grieve the loss of you I'm anchored by knowledge that you personified living life to the fullest and with no regrets.

Oma I've done so much this year. I've traveled. I've seen things on my own and with John. John's traveled and seen so many cool things. You would be so impressed with us. Particularly him. He's learning German and you would be so proud. And I've finally stopped being shy about my German. Which I know ALWAYS annoyed you. I've thrown my self into that whole writing thing I told you about the last time I heard your voice. Someone published me Oma. Something actually published me. And it was about hockey which I think you would have loved.

Not a day goes by where I don't think about you or talk about you. Recently we were giggling about the story Auntie Elfe told me about you jumping a railing at the icecapades so you could get good seats. Daddy and I waxed poetic about the preserved crab apples you use to make. For a travel photography assignment I stated the following when I was asked why photography was important to me and what would I like to get out of a career in photography; 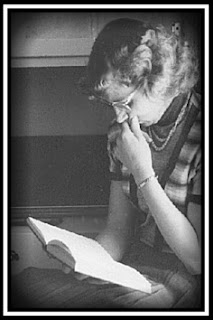 I would use my favourite photo of my paternal grandmother almost as the mission statement for my career in photography if I were so lucky to have one. It’s a photo of her reading at the kitchen table in her early 20′s. She’s pinching her top lip between her thumb and forefinger giving the impression she’s deep in thought. She’s wearing pearls. That picture of a mundane moment in time taken by an unknown person captured the essence of my grandmother. Intelligent, classy, a thinker. It wound up being the photo we used when she passed last year. No other photo captured her essence as much as this one. I would devote my career to finding those small moments that can never be reproduced and making sure they get documented because you never know what that moment will mean to someone else.

You're there in some little way all the time. You were the reason I played roller derby. Your storytelling is the reason I wanted to share your story. Your love for Opa makes me hope with everything I have that my marriage will be as full and devoted as yours. Your life story is the reason that I sit back and think, "yeah this isn't so bad" when things go pear shaped. You've become part of everything I do. Mostly because you're basically the coolest person I've ever had the pleasure of knowing. So while I live my life a little differently than I'm sure you would like (sorry about the tattoos) I think you would just be happy I'm living the life I want.

That's the biggest lesson I learned from you by the way (other than how to make perogies) live the life you want not the one you're told to have. You always did things on your own terms and I think because of that you lived a wildly fulfilling an amazing life. 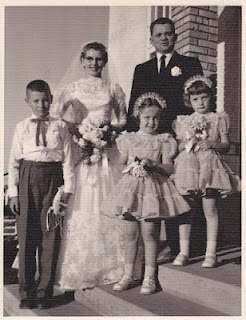 Years ago, while I was still living in Winnipeg, John and I came over on Sunday afternoon. I asked you a question about something. I don't remember what exactly anymore but what ever it was it prompted you to get out a very old photo album and you spent the next hour showing us pictures of you as young woman with your friends being silly in front of the camera. Basically they were photos of stuff people would now put on facebook. Just girls being silly, wearing a goofy hat (I think you said it was your fathers) and just being free in a way that wasn't seen much in those days. The joy in those photos and in your voice when you were telling me about that day was incredible. I think about that often when I'm writing or taking pictures. Am I capturing joy?

I really hope I am.

HomoHausfrau said…
Just beautiful. I have chills..especially after reading the paragraph next to your grandma in thought.

Anne Marie said…
You made me cry. At work. Jerk.

I thought your Oma was one cool chick.

Kim @ Two Martini Lunch said…
What a wonderful letter. It brings to mind memories of my grandmother. It has been 8 years since she has passed away and I still miss her very much. I am glad she was able to meet my boys but I am sad that they don't remember much about her. Luckily I talk a lot and she will live on through my mandatory story time. :-)