This Idiots Guide to Rome

A few weeks ago John was asking about the rules of the 30 before 30 list. He wanted to know if it was officially a go or was it only official once it was posted in my blog. I told him as far as I was concerned once I finished the list it was "official" posting it on my blog was just for a matter of accountability. He seemed to be satisfied with that answers. The next I heard about this list from him was when he asked me if I wanted to go to Rome with 5 days notice. He figured he would help me cross something off my list. Awesome. I'll fill you in on my feelings about going on a last minute trip in another post. But for now we have this idiots guide to Rome.

1. Bus vs. Train. Unless you're taking the train to Rome you're going to need to decide how you're going to get to Rome proper from the airport. You have two options, the bus or the train to termini. Okay...you technically have three options. The train, the bus OR a cab. You can take a cab (offical cabs are white) all you want but it's a 40 euro flat rate. For 9.50 you can take the Leonardo express train which will get you to Termini station in 30 minutes. Then there are the buses. Generally the cheapest option, we saw one for 5 euros but it takes an hour if not a little longer. We opted for the train. The less time we had to spend being shuttled around the better in our opinion. So really what's your time worth to you? We landed at about 2 in the afternoon which meant we still had lots of time to do things if we took the train. If we took the bus, not so much time would be left.

2.  Get the Roma pass. It's worth it! Here's the basic idea of what you get for your 30 euros. You get three days of transportation on the metro and buses, your first two attractions free and then a discount at about 110 other attractions. Doing a bit of quick math you'll discover that the Colosseum alone is 15.50 and a one day tourist ticket for the metro is 4 euros. You're already at 19 euros. If you throw in going to the National museum which is 10 euros you're at a grand total of 29 euros.  Getting it all in one handy card is so worth it. Oh and did I mention it lets you jump the long lines at some of these places?! Oh it totally does. Super handy at the Colosseum. 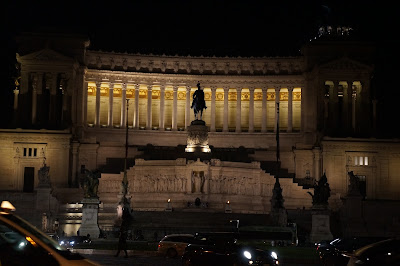 3. Get up early. I got up at 7:30 AM on our first full day in Rome. I'm serious! The minute John booked our tickets to Rome. I booked our admission to the Vatican Museum. Our admission time was 9 am. Ever fancy feeling like the biggest jerk in the world? Go to the Vatican museum, walk past ALL the people in the tour group line and the line for people who didn't buy their tickets online and waltz right in. Once you're in (you'll go through something very similar to airport security) the first place you're going to go is the Sistine Chapel. Follow the signs that say "Short Itinerary: Sistine Chapel". Don't worry about what you're missing on your way there. You'll come back and see it later. But if you want to experience the Sistine Chapel in the way it should be, in peace and quiet, do this. John and I got to experience the quiet amazingness of the the Sistine Chapel with only 5 other people and 3 security guards. We got to just be and observe and see it in the early morning sun. Truly a wonderful experience. We went back 2.5 hours later just to see the difference. Lets just say seeing it in a room with 150 to 200 other people is not the way to see it. It was loud, busy, security guard warning people not to take pictures, a German tourist telling the security guards to turn on the lights because it was to dark. For the record there are no lights in the Sistine chapel. We did the exact same thing on Saturday morning, we went to the Colosseum. Skipped the line, bleeped our roma pass in the turnstile and away we went.

4. Think outside the box. Everyone knows that the things to see are the Colosseum, the Palatine, Captiol Hill, the Pantheon, Trevi Fountain, the spanish steps and The Vatican. Those are the highlights. Those are great. However, there are other great things that you don't hear about as readily. The Capuchin Crypt is one of them. It's hard to explain what it's like. And I hate to say, "you really have to see it to get it" but you do! It's the bones of 4000 monks and a stark reminder of the passage of time. It's really quite remarkable. Another less shocking site is the Keats Shelley house next door the Spanish steps. My degree is in English lit therefore John had no choice in going there with me. We went. I had to. It's the house Keats lived in and died in. A lot of writers made Rome their home for varying periods of time and it's truly awesome to see notes penned by Oscar Wilde about his friend Keats or an IOU written by Keats for a piano (seriously). 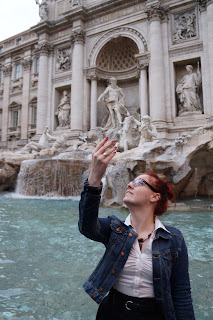 5. BEWARE!!! If you hate large groups of slow moving people, you might want to avoid Rome all together. You want your picture taken with the hilarious gladiators outside of most touristy areas? No, no you don't...unless you want to part with 10 Euros. Yeah 10 euros to take a picture with them with your own camera. See a guy with a bedsheet and "designer" bags at a good price? Walk away. Want sneakily take a picture where they say you can't? Don't. They will stop you, they will yell at you and they WILL wipe your memory card.

6. Dress code. Stereotypes exist for a reason. Europeans generally dress much better than North Americans. John and I can spot North Americans at 50 paces these days. Hell we even dress better since moving to Europe. To the point where we were told when we went home we didn't have to dress "European" when we went to a family function. But that's not what I'm talking about. I'm talking about dress code for some of the attractions. Let's face it, you can't throw a rock in Rome without hitting a church or basilica. And many of them are incredible to visit and free too. BUT you need to be appropriately dressed. No bare arms. Nothing above the knee. They will turn you away. This applies to men and women. Yup...no shorty shorts boys!

7. Watch your step. Rome is old. There's lots of cobble stone. Lots of uneven sidewalks and in some cases what best can be described as potholes in the middle of the sidewalk. So tread lightly.

Anne Marie said…
They take their dress code seriously in Rome. Mom and I were having gelato at a park a few steps away from the Colliseum and she had a tank top on under her sweater. Got hot, took sweater off, got told off by the policia.
February 8, 2013 at 6:16 PM

Whit said…
I think I may need to buy a ticket to Rome... and possibly print this off. Sounds amazing over there! Europe is the last continent (barring antartica of course) I have to visit. I've been avoiding it because of the price tag for quite some time now. Sound amazing, keep sharing!
Raspywit.blogspot.com
May 29, 2013 at 8:51 AM