This idiots guide to Berlin 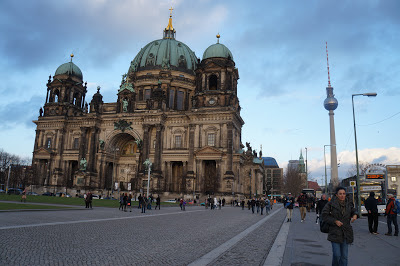 In the last 5 months I have been to Berlin 3 times. Previous to these trips I had been in Berlin once before, right after I started dating Johnathan. Yeah...like a month after we started dating I took off to Europe with my dad for two and a half weeks. Then I did it again the year before we got married. I'm fairly certain he married me so I would stop running off to Europe without him. And my cooking.

Berlin is awesome but overwhelming. Accept right now before you even set foot in the land of Currywurst and enough pieces of the wall to build three walls you're not going to see everything. I've been there 4 times! 4! And I haven't seen everything I wanted to see. It took me until my 4th trip to even get to the Pergamom. So grab a stein of something and read on my armchair explorers.

1. Museum passes are your friend! The husband and I bought a three day museum pass. There are several attraction passes to be had but we got the specific Museum pass. It's €19 and gets you admission into 55 museum permanent collections. This is key. There are lots of special exhibits (The Neues Museum had one on Russian Art and the Film and TV museum had a 40 years of Sesamstrasse....be still my muppet lovin' heart!) For both of those we had to pay a small addition fee no more than €3. If you're wondering if you're going to get €19 of use out of it all I can say is ABSOLUTELY!!! The admission to the Pergamom is €10 and the admission to the Neues Museum (right next door) is €14 so even if you buy the pass and only see those two museums you've saved money. Get the museum pass.

2. Consider taking the bus! Not those hop on hop off buses. No. While there are PLENTY of those in Berlin I'll let you in on a little secret, the 100 bus takes you past most of the places those tours take you past and it's considerably cheaper. A single ticket which is good for 2 hours in a single direction and only costs €2.10 (€1.40 for children between the ages of six and 14). You can ride the entire route and see some pretty nice stuff for cheap. Sure you won't have the nice tour guide telling you what everything is but I'm fairly sure you'll know the Brandenburg gate when you see it. In case you're wondering, a day pass only costs €6.10 and can be used on trains, tram and buses. 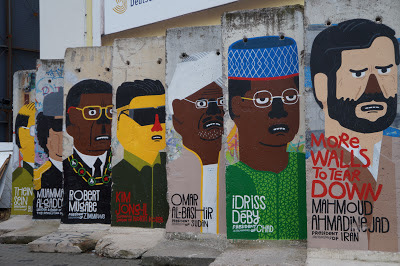 3. Don't bang on about the war. Trust me, you don't need to. It's all there right before your eyes. Germany doesn't hide its history or its wrong doings. They very readily acknowledge what they did to their own people. There are still building that are missing chucks from bombs and mortars. You can stand where Reagan stood when he demanded the wall be torn down. You can walk the length of what remains of the wall at the East Side Gallery. Get lost in the maze that is the memorial for the Jews killed during World War 2. You can tour the former Stasi jail. You can stand in a cattle car. Have coffee near Checkpoint Charlie where former spies use to have coffee. It's all there for you to see. Nothing is hidden. But remember there is a lot of it and it can be incredibly overwhelming. Consider that before you decide to see the Jewish memorial, the gay memorial and the monument to Russian soldiers all in one go (you can do it...you just might need a stiff drink afterwards.)

4. Postcards are your friend. I know I said this in my guide to London but it's worth saying again. You can't take pictures every where so if you really want to remember what Nefertiti looks like (taking pictures of Nefi is now a no-no and they're serious about it too, my dad saw a security guard reprimand a guy who was trying to take a picture using a telephoto from 50 feet away), hit the gift shop, plunk down your €1.50 and get yourself a postcard. I've traveled a lot and I've found that Berlin has some AWESOME postcards they draw on decades of history and photography but also the creative energy that wafts through the city.

5. Schpreckin Englisch. I speak fluent high German. Have since I could speak. Living in Switzerland makes me question my German skills (we can blame Swiss German for that) but the moment I go to Berlin I am understood and I understand. Here's the thing, because Berlin is such a tourist destination most people speak English as a second language. It's super handy if you're like me and it takes your brain a second to code switch from hearing Swiss German to hearing high German. So don't fret about not being able to communicate most people are more than happy to practice their English with a native speaker. Although one lady laughed hysterically when she gave me all the information about our museum pass and then I immediately turned to John and reexplained it all in English. Apparently she would have been happy to do that.

6. Every day is a cheat day. Eat all the things!! No really. German food is soulful, made with love and portioned generously. Between the bratwurst guys with propane tanks on their backs and the little hole in the wall places serving the food my grandmothers made you might as well leave your impulse control at home. And ALL of it comes with a side of pommes or saurkraut, or pea puree, or salted boiled potatoes...or all of them. And it can be pretty cheap too. Though remember I'm coming from Switzerland...compared to what we pay to eat out Berlin is giving away their food! John knows I have some pretty deep-seated food memories. Food is an important part of family life for me. We celebrated, grieved, were joyful, told family stories over food. And Germany is a one way ticket to my childhood through food. He watched me devour a plate of Eisbein (pig knuckle) saurkraut, potatoes and pea puree for lunch at a brewery. He's NEVER seen me eat that much in one sitting and he's never seen me eat silently like that. I was lost in a sea of memories of my Grandparents. German food does that to people. Let happen.

7. It's what you make it. Just like every city Berlin is what ever you want it to be. It can be kitschy and touristy. It can be historical and slightly depressing. It can be artistic and bold. It can be family friendly AND party central.Or if you're me it's a place where the shopping is cheaper and the food is good. It's all of those things. So before you go decide what you want out of Berlin. Do you want to see it's war history or do you want to see it's artistic future?

8. If you wait to get pictures that don't have tourists in them...be prepared to wait a bit. But also don't be afraid to tell people to get the heck out of your shot. Most people are okay with this. We may have had to do this on Christmas Eve when a group of women walked into our family photo and then proceeded to stand there chimping on their digital cameras until my mom told them to beat it...actually she politely asked them to move a little to the right as they were not standing in our family portrait. 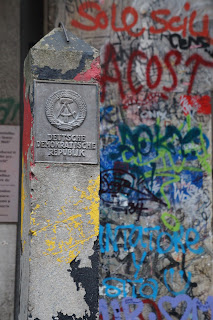 Little Pieces of Light said…
I looooove Berlin! It is one of my favourite cities in Europe. Love your idiots' guide; it's too cute. :) Am hoping to go to Berlin in March with my boyfriend so it's a great guide to have!

Unknown said…
This is a very helpful overview to a very complicated city! We still struggle with what exactly to show people when they visit and try to tailor to their tastes. It's a challenge in a city that cheekily passes out stickers that say "Berlin hates you".
August 30, 2013 at 9:04 AM