It's a well known fact in these parts that I married someone who only tolerates Christmas. I'm not entirely sure why he has such a grumpy badger reaction to Christmas. It could be because he's from a big family and Christmas always meant chaos. Or maybe it was because he's the oldest of 5 and he had to play along with the Santa myth far longer than most people (there is about 13 years between him and his youngest sibling) or as he likes to call it, "actively and knowingly lying to children." It also might have something to do with the fact he HATES being asked what he wants as a gift. Which by the way most people know he hates therefore they ask me what they should get him and then I'm the one who has to ask him and get to be on the receiving end of the eye rolling and harumphing.

Note to self: I think we might need new friends.

It is also entirely possible that it's related to his hatred of bells and Christmas = bells. I know, who hates bells?! He does. Our first married Christmas I said I was going to buy bells and put them on our door. He threatened to kill me with an ax. I should mention we were in Canadian Tire at the time of this exchange and we're fairly sure the horrified woman who overheard this is probably convinced I've been murdered over Christmas decor. Last Christmas a friend of mine (HI ELISSA) sent us a small bell ornament for Christmas because she knew about this. I love her even more for doing that. 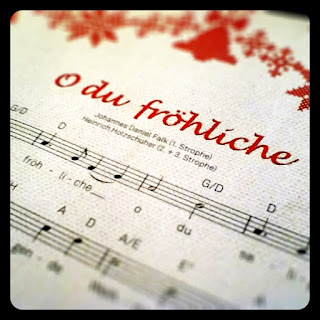 I struggled with Christmas last year because the only familiar Christmas stuff that came with us to Switzerland were our stockings which we picked out our first married Christmas. That is after John made me cry in the middle of Sears when he said, "Why do I need a stocking? I have one its at my parents place." He realized as I burst into tears I had one too but it was 5000 km's away in Newfoundland with my parents and that I LIKED Christmas and I wanted us to create our own kind of Christmas. Needless to say he picked out a new stocking for our place. Although I would hazard to say he still much prefers the one he has at his parents place. That one generally gets filled...the one he has at our place doesn't.

Last Christmas we didn't have Bowler Hat Guy for the top of our tree. We didn't have my Swedish chef talking ornament. Or the ornament that was given to us our first married Christmas. Our tree wasn't  fiber optic and there is no large ginger cat trying to inspect it at all times. It was different and difficult and made worse by the fact John was away for most of the festive season.

This Christmas we put up our sad little Ikea tree together and John has been very open about watching every Christmas special Netflix has to offer. We went to a Christmas market together along with some friends and had gluhwein. We've tried to create new traditions which weird considering we've only been married 6 years so any 'tradition' we had before moving here was still "new" if you think about it. We'll be in Berlin for Christmas this year. We'll be spending christmas with my parents and brother. Which hasn't happened since 2006 aka the year we got hitched.

It's been hard for different reasons this year. It's not that we're far away but because there are people missing from our lives this year. But we're trying and think that's what will get us through this Christmas. Oh and gluhwein....lots of gluhwein.
christmas expat expat living expat wife Switzerland