November 27, 2012
This weeks theme is Christmas movies. But instead I will
do the third and final post about my recent trip to Berlin.

1. Christmas in Europe isn't tacky. It's not all glitter, Santa and Rudolf. I think I might have mentioned this last year. Christmas here seems more down to earth. Less "I saw Mommy Kissing Santa Claus" and more "O holy night." Berlin is gearing up for Christkindl Market seasons and I have to say, it's a sight!! They opened officially after I was gone but I'm super stoked to go back and see them in full swing. All that being said, this Santa near KaDeWe on the Kuu Damm scared me a little. It wouldn't be Christmas without a creepy Santa no matter where you are.

2. Christmas shopping. I kind of hate Christmas shopping now. I use to like it, not love it, but like it. My distaste for it grew last year when I paid over 200 chf shipping gifts back to Canada. It deepened when once again John would be away for much of the Christmas shopping season leaving me to worry about shopping for HIS family. Again. But doing it Berlin helped. First I could leave John's gifts in Berlin with my mom. Excellent. Second it's cheaper! Third, my mom helped. Hoorah!

3. Berlin = Giant things made out of Chocolate. Because I know you want to know. Yes it did light up. And yes it did spin. And YES it's made out of chocolate.

4. Berlin is fully aware of their history. Their past and what other thinks of it. Yet they're not afraid to embrace it or be a bit tongue in cheek about it. Case in point, this place right by check point charlie. 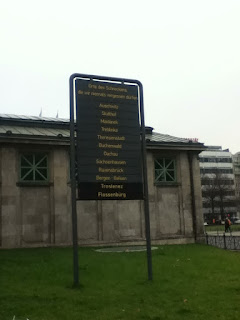 5. Speaking of Berlins History. I'm going to say something that might make people go "hmmm." Or at the very list make people think I'm a bit uptight. I have issues with tourists taking smiling pictures at certain memorial or markers or places of dark historical significance.  There is something about people smiling and laughing taking a picture in front of the sign outside the Wittenburg ubahn station that gives me a no feeling. The sign lists all the camps people were sent to from this station during World War 2. This was the last place many many people saw before being shipped off to their death. I understand the reasoning that people might have for doing this. Perhaps their family story has pieces of the holocaust woven into it. Perhaps there is something about saying, "we were here!" Perhaps they went there at the recommendation of a friend and they want to share that with the person that made the recommendation. That's all well and good for them. But not for me. Would I begrudge someone their holiday snap of them smiling at one of these places No. It's just not my thing. Maybe this is because I'm German and there is a feeling I get when I go to places like the Jewish Memorial or the Homosexual memorial that I can best describe as guilt. Guilt for being proud of my German history, heritage, birth knowing the horrific things other Germans did to people...their own people. Yes, being in Berlin makes me feel guilty, but that's another post for another time.

6. My mom and I can co-exist without any referees for 5 days. We BOTH made comments about how impressed we were. Admittedly at one point my mom played her "I'm the mom" card when I was getting persnickety due to being hungry and she basically said, "I'm being the mom now. You need to eat something." My mom and spot low blood sugar induced persnicketiness from 50 kilometers away. 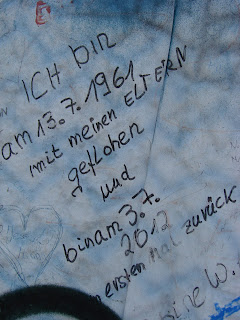 7. ALWAYS stop and read the graffiti. Always. My mom and I headed to the East Side Gallery at one point. I took pictures of the murals, the artwork and the notes left on what is left of the wall. There were lyrics to songs (redemption song was a popular choice.) Whatshisname [heart]'s Whatsherface, handprints, names, dates, personal notes, doodles, messages of peace, love and freedom. And this on the left. Translated it says, "I escaped with my parents on July 13, 1961 and on July 7, 2012 I came back for the first time." That spoke volumes to me. Both of my maternal grandparents escaped the East. At separate times. My Oma as a small child with her mother and sister. My Opa as a teenager with his sister. My paternal grandfather came back to Germany for the first time in the 70's and when my dad went on a day trip with his cousins to Berlin my Opa refused to go along as he said, "the russians had a long memory." Both sets of my grandparents did eventually go back to Berlin after the wall fell but it wasn't until many years after the wall was gone.

8. There is nothing in this world like buying your lunch from a guy with a propane tank strapped to his back and a grill strapped to his front. For the low low price of 1.60!

9. Being in Berlin, or just Germany for that matter gives me a much needed shot in the arm regarding my German language skills. Switzerland does not speak German contrary to what they will try to tell you. They speak Swiss German. Which if spoken slowly enough I can get the gist of what is being said to me. But it's a hard language to understand if you've been trained to speak High German. I can speak and be understood and be spoken to and understand.

10. Awesome place to go when you're doing NaNoWrimo. Really. Almost everything closes at like 6 in the evening unless it's a bar or eatery of some kind. Some places are open late but those a few and far between. So with nothing to do in the evening it's the perfect time to write.

AND remember there is still time to leave a review of my blog at
http://www.expatsblog.com/blogs/1197/the-dubious-hausfrau
to help me win either a gold, silver or bronze expats blog award.
One of the judging criteria is based on reviews left about
my little corner of the internet. So leave a warm fuzzy.
10 things Tuesday Berlin christmas expat living expats blog award German Germany travel travel writing Tuesday 10