This weeks theme is Random acts of kindness. I like that. Before moving overseas I was a fundraising professional.I guess I still am. I have worked in the non-profit sector for most of my post University life. My entire career is built on random acts of kindness. In my career I have worked at 4 different organizations who all had 4 different mandates. I've taught people who to use computers (and how not to download every piece of spyware, virus or bot known to man) most of them were living in government housing for one reason or another (my favourite day on the job was when one of the tenants tried to tell me the hard drive had literally exploded inside the computer, this is the same guy who told me he had windows xxp the super special version.) I've joined parents on their grief journey after the loss of a child and learned grief has no timeline. I've helped make dreams come true for children with life-threatening illnesses and cried when got their wish but lost their battle and helped raise money for a hospital and learned all about the politics of a large organization.

With the holiday season coming up I know people are feeling in a more giving mood and more willing to spontaneously do something nice. Now I've never felt this is something that should be limited to the holiday season but if my years of asking for people to donate time and money has taught me ANYTHING I know people are way more willing to open their hearts and wallets this time of year. So here are 10 things I think you could do to be a little bit more kind this holiday season.

1. Donate something through Child's Play. I'm a big fan of theirs. As is the husband. What is it? Well it's a charity started by gamers who wanted to smash the stereotype that they were a bunch of selfish jerks who only spent money on themselves and their gaming hobby. Their purpose?  Improving the lives of children with toys and games in our network of hospitals worldwide. Hospital staff create wish lists for pediatric wards. You buy something off the wish list and ta-da you've just made a kids stay in the hospital that much more bearable.

2. Write a letter. I've always been an avid letter writer. I think moving so much in the age before email caused this. I still send letters and postcards. Recently I learned about The World needs more love letters. Every month they mail bundles of handwritten love letters to people who are in need of a little bit more love in their life. Yes handwritten letters. Written by total strangers. Sent to other total strangers. I've signed up. Need a little more info? Watch the creators TED Talk.

3. Email someone you can't hug right now this link. Trust me. Or maybe just watch it yourself.

5. Smile. Something I noticed almost right away that the Swiss do is they smile and greet everyone when they pass them on the street. I'm serious. Young, old, people my age, teenagers. Now I'm a generally friendly person (no really I am...stop laughing...especially you Johnathan) but this really really surprised me. They smile and say hello as they walk by. Or good morning...or good evening. Which ever. It's amazing what this has done to me  on some really really bad days.

6. It costs NOTHING to encourage an artist. There are a lot of people in life who ask "why" about things and that bugs me. I get that a lot when I tell people I'm attempting to write a book. "Why?" Really? Does there always have to be a why? Say "why not!" to something or someone in your life. Be that "why not!" when someone comes to you with an idea or project or just something that want to try. I've written about this before here. I have what I like to

7. This kind of goes with number 6 but there is a little bit of money involved. Kickstart someones project. What is this kickstarter of which I speak? Well, their website says it best, "Kickstarter is a funding platform for creative projects. Everything from films, games, and music to art, design, and technology. Kickstarter is full of ambitious, innovative, and imaginative projects that are brought to life through the direct support of others. Since our launch on April 28, 2009, over $350 million has been pledged by more than 2.5 million people, funding more than 30,000 creative projects." The husband and I really like this concept. Also you the kickstarter doesn't reach their funding goal by the deadline your credit card is not charged. The husband has backed a few video games and I've considered backing this project. But the projects really run the huge spectrum of things. There is truly something for everyone.

8. John and I have a long talk recently about a lot of things and he asked if there was something he could be to be more helpful. I said, "care. Even when you don't really want to." Just going that little extra mile and caring just a little bit more than usual is huge.

9. Be encouraging. We live in a world that can be so discouraging. Be that bright spot someone needs.

10. I've gone on and on and on a few times in this space about the importance of saying thank you. Just say thank you! Really. Just do it. Your mom wasn't kidding when she said it was important to say. In our house it was always "the other magic words." Being thankful is super important to me. Interestingly enough tomorrows post is all about being thankful. You should come back for that. 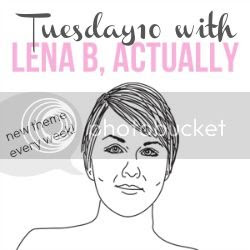