To the Soldier in my family

My understanding of your war experience was that you were in it from almost the very beginning to the bitter end. Not that it was your choice. You found yourself in an impossible situation and you did what most men of your generation and from your part of the world did, you were a solider not because you wanted to or you chose to but because you HAD to be.

Today is usually a time a reflection in Canada. A time to remember the solider who gave their lives to freedom. This was something you took so very seriously after moving to Canada. You bought a poppy every year and lectured Amanda, Johnny and I on the importance of the freedom we had in Canada and to never take it for granted it. It wasn't until I got much older that I realized you were speaking from a place so personal. You knew what it was like not have any freedom at all.

My understanding of your early life is as follows. You were born in the midst of revolution in Russia. You know what famine is. You know what its like to have your father taken away from you because of his belief. You understand what it is to have your family disappear because of their beliefs. You had seen the inside of a work camp with your mother but had your life spared because you were just a child at the time. I know you were part of the Soviet invasion of Poland in September 1939. When the Soviet and German armies met, you continued marching. At the point you were no longer a Soviet Solider but a German Solider. As my father put it once "He traded one murderous leader for another." On the 5th of May 1945, when you and the rest of his division drove your equipment off a cliff and surrendered yourself to the Americans and a POW camp in Austria. 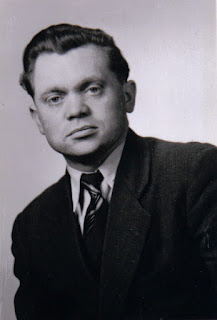 My understanding of you life later in Canada was that you were fascinated by technology. I remember explaining the internet to you. Your grandchildren were your world and that you came to Manitoba because it reminded you of Russia. And that you fell in love with a strong willed Mennonite woman name Martha that made you almost beg for her hand in marriage. "We're not getting any younger." I'm told is what you said eventually. I love that more than you'll ever know.

As of tomorrow you've been gone for 10 years. 10 whole entire years without you. So much has happened Opa. So very much has happened. I graduated from University. Johnny finished flight school. I met a boy that became my husband. I moved to Switzerland because of this boy.

Let me tell you about the boy I met. I am told by several people that you would have liked Johnathan. That makes me happy. While my dads approval of Johnathan meant the most your approval would have meant so very much too. He's a farm boy which you would have held in high regard. But also he has a quiet humility that you would have liked as well. Rumor has it you would have liked that he was a red head too. That makes me smile. Also he's up on the latest technology which you would have been tickled about. Not only does he know how to drive a tractor but he could show you how a computer works. He works hard to provide of us and loves the food the women in our family make. You would have really really liked him and his family Opa. Above all Opa, he loves me and he loves our family. He is so much a part of my life that I forget you never met him. That makes me so sad not just for me but for him. He would  have really liked you too. On my wedding day Opa, I'm sure you saw, I carried white carnations for you. I also felt you there. When the minister that married us started praying in German I felt you there. With us, not just me but both of us. I knew you would make an appearance. You were never one to miss a chance to celebrate.

Speaking of carnations I brought you some this summer. Did you like them? 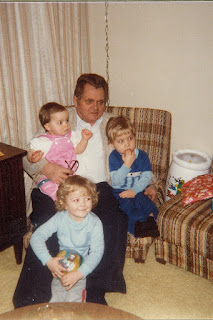 I talk about you a lot. If Johnathan couldn't meet you at the very least I can pass on my memories of you. The way you would turn down your hearing aid when your grandchildren were there. The way you shook your head at me and my fashion choices in high school. The way you watch chaos unfold around you on Christmas eve. The way you use to sneak Amanda's cat Dawson treats when Oma wasn't looking.

10 years is a long time to be gone Opa. And so much has changed in that time. Mostly I grew up. Your news lady grew up. Interestingly enough Opa I'm taking a travel journalism course right now. How about that, your news lady is trying to be an actual for real and for true news lady. Go figure. And you'll be happy to know I have never again skinny dipped in a rain barrel.

Oma died in March. My heart is still broken. Very very broken. But there is a small piece of me that smiles because I know for 10 years you've been waiting for her. You're together again and my word that makes me happy. So furiously happy. 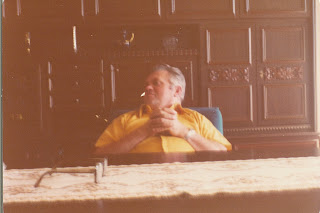 I miss you Opa. I miss you laugh. The sound of your voice. The sound of you puttering around in the kitchen when Oma wasn't looking. Wow were you sneaky. I miss you giving me chocolate when my mom wasn't looking and giving me a loonie for just being your granddaughter. I miss your ridiculous assertions I was going to cut off my foot if I mowed your lawn. Or that I would fall off the roof if I put up your Christmas lights. I miss your head shaking when you saw what I was wearing and I miss you picking me up from school because you were worried something would happened on my walk home.