Halloween is my favourite. Mostly because I'm a die hard homemade costume fan.
And because it's the one holiday my mom doesn't like so my dad and I get free reign.
For the record ALL costumes I've ever worn were homemade. I've NEVER bought a costume.

1. Grade 12. I used Halloween as an excuse to look
even MORE punk and MOTE goth than I did on a regular basis.
We're talking pleather plants, long black pleather trench coat.
WAY heavy black make up.
Weirder and more goth than normal. Not really a costume
My friends joined me in this awesomeness 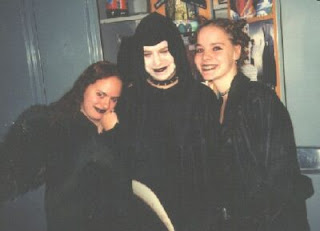 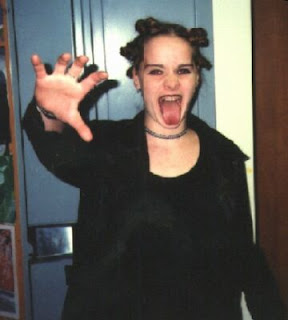 2. Grade 2 or 3. I went as a dalmatian.
Yes, those would be black spots taped to a white shirt. 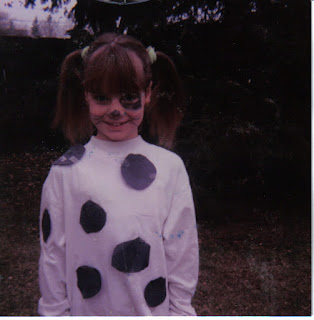 3. Grade 4. Batman Returns was a big hit that year.
Michelle Pfeiffer as catwoman rocked everyones socks off.
My friend Stephanie went as catwomen. Yes, Michelle Pfeiffers Catwoman.
Her mom made the costumes. They were epic and amazing. And I wish
I had a picture on my computer to show you but I don't.
I wore that costume a few years in a row because it was so well made.

4. Grade 1, the second time round. An Angel. My mom had this rule,
we could only be "nice things" for halloween. So I had tinfoil and cardboard wings
and a costume that was my former gymnastics tights and leotard.
The wings tied around my waist with string. They kept flopping over.

5. Grade 6. A mime. The school I attended at the time had a tradition
on Halloween that the grade 6 class would turn their classroom into a haunted house.
Due to my moms rule of only being nice things I was a mime.
What kind of haunted house has a mime?! So my friend Heather had an idea.
Put me in a box, with a big hole in the front. She would be a fortune teller.
She would tell fortunes on the top of the box and I would grab at people.
Yeah, I sat in a box all afternoon so no one could see my costume.
Admittedly, my mom did come to the school at lunch and did my makeup.
It was pretty awesome.

6. Whose this cute little Zombie? 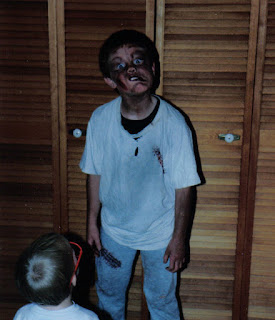 That would be the husband. And please note, this was from
before Zombie were cool and trendy. What a trendsetter he is.

7. 3rd year University. I wore my grandmothers dirndl.
Actual authentic dirndl not one of these cheap and cheesy costumes.
There are pictures some where of me in my dirndl.
I just have no idea where that is.

8. Grade 1, the first time round. A pink bunny.
My good old gymnastics leotard was used.
My mom made polar fleece ears using a coat hanger.
I had a pink fleece tail. I was so cute it hurt.

9. There is a picture some where in some photo album
of me dressed as Shriekey from the Care Bears.
Purple hair and all. Yup my obsession with purple hair
started very young. I think I was like 4.

10. About 4 years ago John arrived home from a business trip
on Halloween. I picked him up from the airport dressed as a
red shirt from Star trek. He laughed hysterically.
As did his coworker who arrived with him.
10 things Tuesday Costumes Halloween Tuesday 10