Half way down the stairs

If I was a betting sort of woman I would bet you I like the Muppets more than you do. Hell more than most people. I not only know my Muppets but I know my Muppeteers. My head is filled with muppet trivia and currently in storage back in Canada is my very own custom Whatnot Muppet from the FAO Schwartz Muppet Workshop. 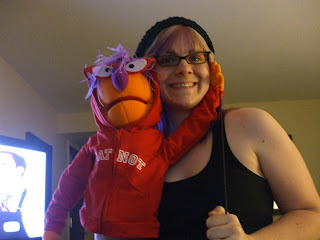 Because news happens across the ocean while I'm asleep in Switzerland I woke up this morning to find out one of my childhood heroes was gone. Jerry Nelson was gone. The voice and the person that brought  Floyd Pepper, Gobo, Pa Gorg, The trash heap, The Count, Herry Monster, Sherlock Hemlock, The Amazing Mumford, half of the two headed monster, half of Snuffy, Stadler, Camilla the Chicken, Lew Zeland, Robin the frog....Uncle Deadly....Mr. Johnson to life was gone. My heart broke.

I wouldn't expect people to understand how I would feel about this. Then I saw what my brother posted on my facebook timeline.

He got it. Then John surprised me by saying, "I know what a huge part he played in your life." He got it too.

My love of the muppets runs deep. Jim Henson, Richard Hunt, Frank Oz and Jerry Nelson taught me it was okay to imagine, to be creative, to be weird and that talking frogs and bears could be best friends. That Whatevers could love chickens and that Mr. Johnson was a glutton for punishment. There was nothing wrong with being a Weirdo and who cares if you're not sure what you are you still have a family and friends that loves you.

I sat on the couch, drank my coffee and remembered as I watched the memorial playlist the Jim Henson Company put up on youtube. I smiled. I laughed. I cried. The 6 year old weirdo muppet fan who thought it would be awesome to Gobo Fraggle when I grew up is now a 28 year old weirdo muppet fan who still uses ala peanubutter sandwiches on a regular basis. And I wouldn't have it any other way.