July 23, 2012
Today marks an awkward anniversary. 9 years ago today the husband and I had an awkward lunch at a local, now non-existent, Italian restaurant that was opened by a peripheral friend of his. This was on the heels of a conversation we had had in a Tim Horton's drive thru a few days earlier when I told him I liked him more than a friend (yeah real smooth Tatiana) and Johnathan replied with, "that's nice." That's a direct quote dear readers. After this awkward lunch, on the awkward drive back to work I did something that annoys Johnathan to this day. I said, "tell me something true." It's a habit I had picked up from my friend Holly back in the 9th grade. She would often say this to me. I've always liked it. It creates conversation without forcing it. Like I said, I still do it. His response was, "I would like for you to be my girlfriend." I agreed that would be lovely and we went back to work. 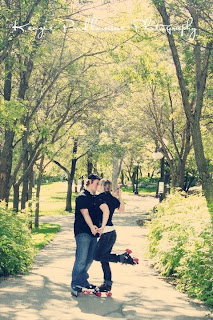 I think I told Jamie when I got back to work. Did I tell Jamie? Jamie, did I tell you? I can't remember. I was 19 and a boy with hilarious tshirts and red hair had asked me to be his girlfriend.

That evening we went out with our co-workers to a karaoke night. That's where we awkwardly made our relationship public. Johnathan drinks with his left hand (little known fact) and I had taken a seat on his left side. I had to change seats he told me, so he could hold my hand. Later in the car when he dropped me off at home he looked all out of sorts. I asked about it. He mentioned wanting to kiss me. I smiled and we leaned in and had the most awkward first kiss known to man in his old blue buick outside my parents place.

This awkward beginning set the stage for a rather interesting, awkward, lovely 9 years filled with our own brand of romance, mutual weirdness, ridiculous text messages of "paperclips, come to me!", nerdiness and thinking a knock knock joke about an interrupting cow is the epitome of comedy gold.

During that awkward lunch I never dreamed I would move overseas with this boy. Heck, I didn't even consider the fact that I might actually marry this boy. I just wanted to be with him for however long I was suppose to be.

I look forward to many many more years of weirdness, nerdiness and bad knock knock jokes.