30 things about a boy named Johnny

That's my older brother. He's a pilot.
But if you ask my mom, this is my brother.

If you ask me this is my brother 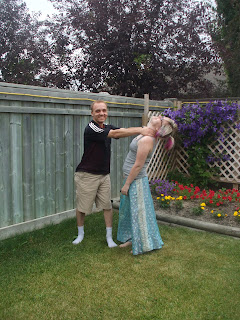 He turns 30 today. Which is all kinds of weird. In a good way I assure here.
In honour of my love of lists. Here are 30 things about my brother.

1. He is the reason I could not sleep with my bedroom door closed until like at least Junior high if not later. He told me when I was very little if I slept with my door closed I could get kidnapped and then when I screamed mom and dad wouldn't hear it because my door was closed. This came on the heels of a little girl in our city about my age going missing so for YEARS (are you reading that Johnny YEARS) I couldn't sleep with my bedroom door closed. Even now I get a little antsy when its closed.

2. My brother was named after my dad but most of the family and a few non-family members call him Johnny.  He was called Johnny at school when he was in Kindergarten but then some kid called him "Johnny Appleseed" and from that day forward he INSISTED he be referred to as Erwin at school. I use to call him Johnny when we were at school together anyway because I loved watching him freak out about it.

3. When ever he calls and starts the conversation with, "Quick question..." it's usually a food preparation question. He figures calling me is easier than sifting through google.

4. He is the reason I got stitches as a child. But he will go to his grave swearing it was the wind.

5. His voicemail greeting is, "I'm either eating, sleeping or flying." That's his life in a nutshell.

6. He is the only grandson on my dads side of the family.

7. No one believed him when at the age 5 he said was going to be a pilot. Boy did we all look silly the day he started ground school. 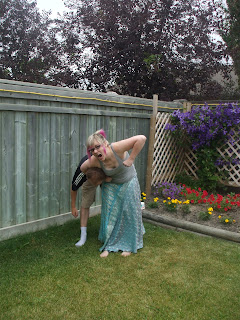 8. He has had stitches at least 10 times. The last time he got stitches I kid you not, this was the conversation my mother had with me, "I'm going to the hospital. Your brother needed stitches. I'll bring home dinner." My response, "Okay" and I continued watching TV.

9. Family lore suggests he was pretty "meh" about having a sibling. Apparently he treated me like a new piece of furniture. Although he wasn't impressed at the hospital when he learned seeing me meant he couldn't run down the maternity ward hallway for funsies.


11. He likes running. This confuses me. Mind you anyone that "likes" running I find highly suspect.


12. His favourite movie when we were growing up was "Land Before Time." It's seriously the only movie he wanted to rent at Blockbuster for like a YEAR! I hate that movie because of him.

13. He didn't like it when I played Lego or constructs (anyone remember those) with him. I didn't follow the book or instructions. I just built stuff and gave it a name. He built things from my manual. I think this right here is the perfect explanation regarding how different my brother and I are.

14. I'm fairly certain the only thing that is keeping his car from completely just giving up and falling apart is prayer.

15. He hates reading. My family doesn't like to talk about that.

16. He was once voted most likely to die trying to prove a point. (okay this where were the similarities between us are.)

17. My brother was a long distance track runner in high school. He also played rugby. He usually lapped his team during the warm up jog. Eventually the coach had to tell the team to not let my brother lap them and try to keep up. If they couldn't when he was coming around they had to try and knock him down.

19. He's nervous around big dogs. The first time he came out to my in-laws farm I had heard him pull up outside and I had heard his car door slam. Then nothing. Then I remember Duke the farm dog was outside. Who was just the sweetest thing...but rather big and scary looking. Duke who wanting a head pat was standing in front my brother and my brother was pinned against his car trying not to freak out. I had to rescue him.

20. When we were kids, he did THE BEST ET impression.

21. He's an AMAZING pilot. AWESOME pilot. Very piloty pilot. I will fly with him any day. I hate driving with him though.

23. He's the only person I know that puts coconut on their oatmeal.

24. He was the person with me when I picked out my wedding dress. I found it in a pattern book and I showed my brother and he said, "That's pretty." That did it for me. Decision made.

25. He does not like it when my cousin Amanda and I try to fold him into a fold up couch. Go figure.

27. Friday nights was always the night my brother and I had to do dishes after dinner. This was pre-dish washer years. One would wash the other would dry. Both my brother and I HATED this. Oddly enough right before we were suppose to do the dishes he would have use the bathroom desperately. Leaving me the brunt of the work.

28. Never ask his thoughts on any of the Star Trek movies unless you have lots of time.

29. If you cut him open he'll probably bleed coffee.