W is for Wander 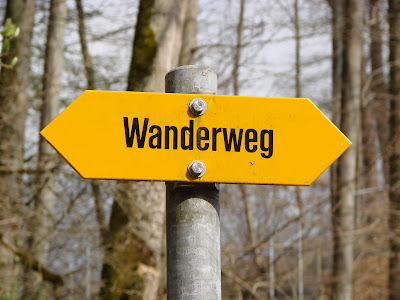 I was lucky enough to marry a fellow wandering soul. Never content to be in the same place for to long. There is too much out there to see and do and experience. We've never been content with wandering down the easy road. We generally don't have a destination in mind. We just go. There are adventures to be had. Countries to live in. Weird food to taste and brilliant moments to participate in. As Tolkien suggests, "Not all who wander are lost." Heavens no, we're not lost. We just adventuring.

The Road Not Taken - Robert Frost
Two roads diverged in a yellow wood,
And sorry I could not travel both
And be one traveler, long I stood
And looked down one as far as I could
To where it bent in the undergrowth;

Then took the other, as just as fair,
And having perhaps the better claim
Because it was grassy and wanted wear;
Though as for that the passing there
Had worn them really about the same,

And both that morning equally lay
In leaves no step had trodden black.
Oh, I kept the first for another day!
Yet knowing how way leads on to way,
I doubted if I should ever come back.

I shall be telling this with a sigh
Somewhere ages and ages hence:
Two roads diverged in a wood, and I—
I took the one less traveled by,
And that has made all the difference
a to z challenge adventure poem wanderlust