O is for Odd

April 17, 2012
Every family has that eccentric member that everyone smiles and nods at and then talks about behind their back when they leave the room. You know the ones, they dress weird, you make small talk only over the taco salad at family functions, they're a bit of a raconteur. Sometimes it's an elderly relative other times its that upstart married in person. In our families John and I seem to be those eccentrics that people talk about in hushed tones (yes respective family gossip mills...we know...we've always known. There are leaks among you, you should really remember that.) We think that due to this black sheep nature that we both possess is why the oddities that call Switzerland home delight us so. Switzerland seems to be Europes eccentric relative.

Proof? Let's look at just the city of Bern for a moment. 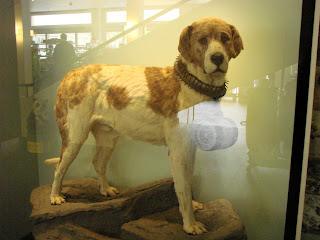 He is a 200-year-old taxedermied dog at the Natural history museum in Bern. Oh but he's so much more than that it seems. He is Barry the most famous of all the apline rescue dogs!! He's credited for saving over 40 people in his time as a rescue dog. Impressive. He lived from 1800 to 1814. There are story books about him available in the gift shop. So what do the Swiss do to honour such a heroic canine? They stuff him and stick him in the lobby of the Natural History museum with his heartwarming and heroic life story in three languages on the wall next to this dynamic diorama. 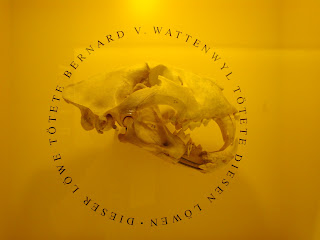 This is the skull of the lion that killed the guy that killed over 25% of the animals that are stuffed and in the African section of the museum. He was attacked by the lion that previous owned that skull. Bernard V. Wattenwyl he had previously wounded the aforementioned lion. He managed to kill the disgruntled lion but was lethally maimed in the process. His daughter carried on the expedition and brought home a staggering amount of skeletons and hides for the museum on Bern. 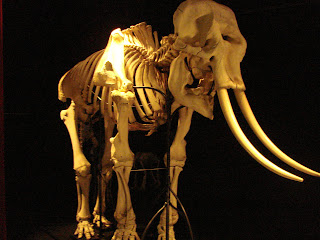 In 1866 this circus elephant killed its trainer. So the townsfolk of Bern retaliated and killed it. Using a cannon. They turned the elephant into a stew that fed the whole town and put its skeleton in the Natural History museum. They sure showed that elephant! In the gift shop you can purchase a postcard which has a photograph of the incident. Triumphant Bern towns people are standing around the ex-elephant before embarking on epic stew making. 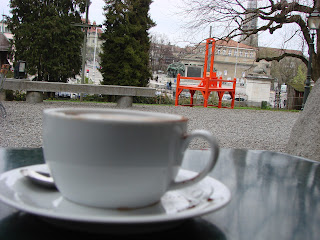 This is a cup of coffee I enjoyed at the Bern History Museum cafe. It was a lovely Easter Monday afternoon. Birds were singing, we were chatting about our upcoming trip to Canada and our view was of the museum garden and...well...of a guillotine.

The only thing we can figure out about it is that it was erected as part of the museums temporary exhibit on Death.


These things are JUST in Bern. In the rest of Switzerland we have fun things like, the museum of historical medicine in Zurich featuring Switzerlands ONLY authentic 14th century plague doctors uniform. Reichenback Falls which is home to the Sherlock Holmes museum AND the waterfall at which a fictional character had a fight with a fictional villain and faked his own death. Lets not forget the Frog Museum in Estavayer-le-Lac which is a collection of 150-year-old tableaus of 19th century daily life depicted using stuffed frogs.