G is for Giant Baby Eater 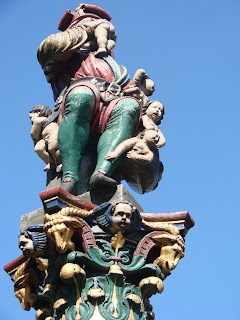 Shortly after we arrived in Bern someone told us we needed to go see the Giant baby eating fountain. BA!!???

Bern is a city of fountains. There are about 100 public fountains throughout Bern but the most significant are the 11 that date back to the 16th Century and are beautiful bits of renaissance allegory. One of them being the Kindlifresser aka Child eater. We've heard it called by a few names but the one that stuck with us was the Giant Eater.

According to our Bern guide book the fountain was built in 1545–46 on the site of an 15th century wooden fountain. Not sure how well you can see the details in the picture I took on one of Switzerland's many cloudy days but here's the jist. The statue is a seated giant with half a child stuffed in his mouth. Several other children are visible in a sack at his feet awaiting their fate. Yup, I'll let you mull that over.

Our first reaction was mixture of glee and "why would build that?!"

To answer the question of "why would you build that?" we headed over to one of our favourite websites The Atlas Obscura. It's your one stop shop of the truly random, obscure and unusual places to see and visit around the world. If anyone knew why this beautifully hilarious fountain existed they would!

First we learned is one of the oldest fountains in Bern. Oh how very historical. Then we learned, apparently no one can agree on why this was built. Well that's not helpful. In further reading we learned there are three main theories as to why this statue was built.

1. This theory is the most unfortunate in my opinion. It is thought to have been a warning to the Jewish community of Bern and this is due to the hat the giant wears which is known as a Judenhut (jewish hat) which the jewish community was forced to wear during the period in which the fountain was built.

2. It's the Greek titan Kronos. If you know your Greek Mythology you'll know Kronos would eat his children to prevent him from taking his throne.

3. This one I find hilarious because I'm a youngest sibling. There is a school of thought that is a depiction of the older brother of the founder of Bern Duke Berchtold. There was some jealousy regarding his younger brothers success which is said to have lead him to go crazy to the point where he rounded up the towns children and ate them. Talk about sibling rivalry!! As much as I like this theory there seems to be a complete absence of historical evidence. Damn!

We did learn later on after our little investigation from someone who has spent the last 10 years in Bern is that most people believe it the Bernese Boogie man. Designed to act as a cautionary tale to children to behave. Now being brought up in a German household I totally believe this. I was told if I sucked my thumb I was told someone would come by and chop off my thumbs. Further to this I was told if I rocked back and forth in my chair at the dinner table I would fall backwards, pull everything off the table and die. I write more about this form of child rearing here.

Regardless of the reason it was built it is definitely one of our favourite things in Bern.