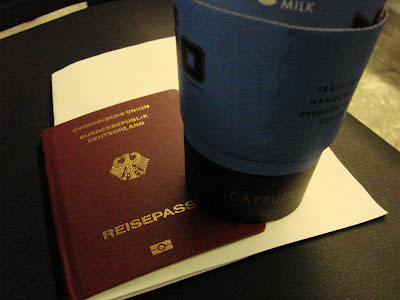 No jiggity jig...I am a Mennonite after all. We only dance when God isn't watching. We're home and we spent most of yesterday after our return to the Canadian Beachhead which we have establish here in Switzerland in separate rooms reading and/or on our laptops basically not interacting. We've just spent 6 days together. Whole entire days. Together. All the time. We both came back alive. YAY! We only fought on the first day which was brought on by us trying NOT to fight. YAY squared. We both had a tremendous time. Yay cubed.

There will be a few posts about London coming up in the next few days but for now, some highlights.

1. On the underground we are headed to Kings Cross Station. We're off to a small pub/theatre to see a band made up of some our favourite comedians play (The Idiot Bastard Band). It's crowded but we still have some modicum of personal space. At one stop an older couple gets one. He says to his wife, "I'll tell you what Proust was trying to say..." John heard it. I heard it. We stared at each other and he quietly said to me, "he's summarizing Proust." Cue fit of suppressed giggles because we didn't want to draw too much attention to ourselves. No idea why that's funny? Watch this.


3. We decided to take a load off and take in a cute afternoon show called "Horrible Histories" we're fans of the books and the TV show. It's wonderful. It was an hour and I am fairly sure we were the only people without kids in the audience. The best part though when the actors mentioned Florence Nightingale the roar that came from the audience was amazing. The mere mention of her name caused amazing cheering. It was awesome. Hilarious and wonderful.

4. In Hyde Park there is something known as Reformers Tree.The actual tree that was there was burnt down during the reform league riots in 1866 and the remaining stump became a notice board for political demonstration and a gathering point for reform league meetings. As we're standing looking at the mosaic John turns to me and says, "You mean to tell me that there is no ACTUAL TREE at reformers tree?" He was not impressed.

5. You know how when you tell people you're going to London people often joke, "Going to see the Queen?" Yeah well guess who saw the queen?! Or as I stated on Book face, we stumbled upon some woman named Elizabeth at Fortum and Masons. She has some chick named Kate with her. We were staying in a Hotel located on Jermyn street which is where the first ever Tuxedo was made. It was behind Fortum and Mason which is the Queen official grocer (we were down the street from her Cheese Shop by the way.) The morning of March 1 we were headed to the British Library. As we walked up the street along the side of Fortum and Mason we heard music. John says to me he hopes its not another immigrant workers protest which we have a habit of happening upon. We arrive at the corner. Oh the people. Every where. And the media. Huh. So we politely asked a police officer what was going on and if we should change our route to the tube station. He tells us the Queen is paying a visit. He recommended we go across the street to get a better view. Or that we head the opposite direction to an alternative tube station. We headed across the street. She came out eventually. We waved a long with everyone else. We're going to assume she and Kate waved back at me because magically they knew it was my birthday. Didn't bother with pictures unless we wanted pictures of nothing but the back of peoples heads. So yes we did go to London to see the Queen. You can read about the Queen going to Fortum and Mason here.

6. We were in the British museum looking at something that I'm sure was pillaged at some point from Egypt. We noticed a little boy looking at something listening to the audio tour. His mother was trying to hurry him along to the next room. He very politely said to her the audio portion of that particular item was not finished and he would like to wait. I just about died. I wanted to take him home with me.

7. We took in a burlesque show. It was traditional burlesque mixed with a traditional afternoon tea. What a fabulous way to spend an afternoon. Between the rum in the pot of tea we ordered to the fact I had a teacup belonging in my china pattern (aka my maternal grandmothers china) it has got to be one of the best ideas we've had. However the best part came when I turned to John as the second last performer was leaving the stage and said, "she was wear fabulous shoes!!" John blinked at me and replies, "she was wearing shoes?"

8. We hit the biggest toy store in Europe. I needed to buy a Harry Potter wand. Yes needed. I purchased a Luna Lovegood wand. As I was waited for the clerk to bring me my wand a grown man picked up a wand that was on the counter. He immediately swished and flicked saying "Wingardium LeviOsa." Epic.

Macy said…
My sister in law is a HUGE Harry Potter fan so I frequently text that phrase to her randomly. Then once I went to add "windex" to my grocery list and it autocorrected to "WINNNNNNNNGARDIUM LEVIOSAAAA!!!" It was hilarious.
March 5, 2012 at 9:35 PM

Tatiana said…
bahahaha! When the clerk handed me the wand I immediately pointed it at John and said, "expelliarmus!" He replied with, "Don't point that thing at me, it's dangerous!"
March 6, 2012 at 11:17 AM

HomoHausfrau said…
Sounds like you had a fabulous time!