January 30, 2012
6 months ago we stepped off an Air Canada flight bleary eyed and shell shocked. Customs welcomed us to Switzerland with a thump of their stamps on our passport. We just stared at each other in disbelief.

Recently we were in a book store and Johnathan likes to go the the travel guide section and flip through the books they have on Canada. He showed me a picture of one of the steam tractors they have at the Mennonite Heritage Village. I started to cry. I noticed he lingered on a two page photo of a canola field. Homesickness has been galloping through this apartment as of late. But so has a sense of accomplishment. 6 months. We've survived 6 months. All victories big or small must be celebrated. 6 months is a HUGE victory. Here's what we've learned so far.

1. Never take the 5 o'clock train from Basel to Bern on a Friday. Apparently that train goes to Milan which means it's PACKED with tourists and people going home to Italy for the weekend plus commuters from Bern. My intrepid ex-pat friend and I got stuck on that train which had standing room only and about a million people on it. This was further compounded by the delays that had been occurring on that particular line all day. The overhead announcements indicated this was a replacement train, it would be making ONE stop only before Bern, there was no restaurant car, no bar and no concession. Furthermore, the last stop was in Bern and everyone would need to get off to find other trains. We were lucky to get seats period because we arrived as the train arrived at the station. A very nice lady who was sitting with us mentioned to us she tries to avoid this train if at all possible on Fridays but due to the delays she had to take this train. She advised us to avoid it like that family member you don't like if we can help it.

2. You haven't lived until you have seen the Swiss trying to line dance. The theme of the husbands office Christmas party was "Western". Yeah I don't get it either I always assumed the theme of an office christmas party was well Christmas. A portion of the evening was devoted to line dancing and line dance instruction. Now having been educated in the Canadian school system both John and I were taught how to line dance in school. Why line dancing is part of the phys ed curriculum I will never know but it is. So is learning to polka and square dance. John and I opted out and watched from our table giggling like children. An american he works with also remembers learning in school and joined our giggle fest. The best part, (imagine this is being said in a heavy German accent) "one two three to the left...wait wait wait lets try that again, we won't do it to music until we get it right! Again." Bahahahahahahahahaha!

3. We noted very early on that the Swiss all look very healthy. We figured out why. It's from running for public transportation. Oh but we have also discovered something, there are a lot of people on crutches. It appears that the Swiss whilst healthy people...are also a very brittle people.

4. If they flattened Switzerland out it would be bigger. Oh and there would be no hills. I hate hills. Hills are stupid. They'll make you dumb. Yes I started running again. Yes that means hills. Yes I'm someone who started their running on the flat Canadian Prairies. My opinion still stands. Hills are stupid. However, John and I recently reflected that we were terrified of the hill we live on top of. Now, most of the time we opt to walk up the hill rather than take the bus. Go us.

5. Vegetarian diet = way more cost effective. However we do get excited when meat is on sale. Oh AND eating healthy here is way cheaper than in North America. In Canada it's cheap to eat crap. Here it's expensive to eat crap. I like that. A lot. 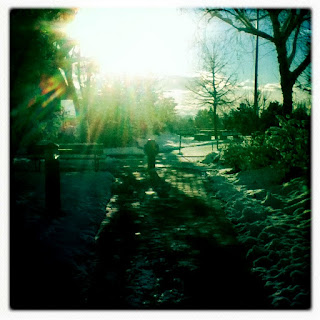 6. Switzerland is the Newfoundland of Europe. I don't know if you've ever been to Newfoundland but the similarities are remarkable. The sun won't come out for days. Everyone thinks -10 is cold. It's rocky, hilly, the snow we get is wet and in a constant state of snowball readiness although it also requires you to carry an umbrella at all times. It will also snow for hours but the likelihood of it all being gone the next day is high. The people speak a strange dialect and you have to ask them to speak slowly so you can understand them. It's small and seems to be the but of the rest of Europes jokes.

7. The Swiss will walk through you or into you before they ever dream of moving out of the way. I know as a polite Canadian I'm suppose to be appalled by such behaviour but there are few things in this world that aggravate me more than slow walkers and people who insist on walking 4 abreast or even worse, people who do both. Now I'm a firm believer in plowing through people in public areas. I remember last Christmas shopping season I treated the crowd in front of Lululemon like a pack of blockers and I was the fearless jammer as I wound my way through it. John was behind me yelling "call off the jam call off the jam." He didn't fear for my safety...heaven no. He feared for the safety of others. Needless to say it's nice to see my behaviour is considered socially acceptable here.

8. Slow walking people walking four abreast in a train station with ski equipment makes me want to do someone harm.

9. John lives in constant fear of getting his eye poked out by the pointy things on the end of an open umbrella. With the willingness to walk into and through people comes a complete disregard for where your umbrella is and who it might accost and whose eye you might poke out. This apparently is the reason John no longer likes sharing an umbrella.

Switzerland what we've learned so far

Anonymous said…
John's scared of umbrella points; I'm scared of getting burned by someone waving their cigarette in a random manner. Ouch. jo
February 4, 2012 at 4:11 PM