January 15, 2012
1. Zurich Buskers could teach Winnipeg buskers a thing or two.
2. I am London bound for my 28th Birthday! We've had some unpleasantness as of late which prompted the husband to spill the beans. He wanted me to have something to focus on and he wanted me to have something to look forward to. I've been to London previously in 2004 and then I lived in England in 2005. Here's the thing, the first time I went to England John and I had JUST started dating. The second time, I left him at home to teach in Canterbury. We got married the following summer. I left part of my heart in England and I am beside myself excited I get to go there with him. He's even making up for last years birthday present by taking me to Wicked. He bought me tickets for the touring companies production in Winnipeg...in August. Yeah. Switzerland got in the way. I feel a picture at Charing Cross coming on!!
3. Had a skype date with my bestie. When I skype with my best friend that always means godchildren giggles. There are few things in the world that godchildren giggles can't cure.

4. I told John to tell me story one night. This is the story he told me, "Once upon a time there was a princess that lived in Switzerland. She asked for too much. Then she got what was coming to her. The End." 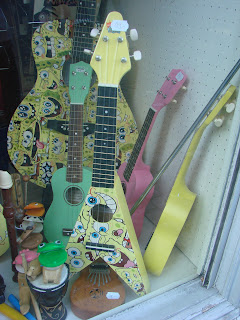 5. I've decided I need this. I don't know HOW to play the ukulele but how hard could it be? Further to that it can't be that hard to play a flying V Sponge Bob ukulele right? Just image how bad ass you can be playing "Bark at the Moon" on this!

6. I'm currently expanding my reading horizons. I decided to challenge myself to read things I wouldn't normally read. I'm currently reading something that falls under True Crime (serial killer in Nazi Occupied Paris), a mystery non-fiction type thing (about the rare book industry) and Hell No by Penn Jillette which is about Atheism/his autobiography.

7.  Sitting in a "hard rock" knock off but way cooler restaurant in Zurich yesterday with John we observed a few things;

8. Johnathan and I recently had an argument about the oxford comma. My very intelligent rebuttal was, "well fine if you think they should get rid of it why don't we round pi up to 4 whilst we're at it!!"
9. This printable PDF. Tis a daily self-love worksheet.
10. This is my 2012 resolution.