December 02, 2011
Dear Facebook (or as I affectionately call you, Bookface.)

You've change a lot in our relationship. But that's the key to a good relationship is it not? We've both grown up. You're not longer a clunky little website for college students only and I'm not longer searching for people I went to preschool with. We've both grown up. Yes people like to complain about the changes you make but I always figure those who complain the loudest about your changing interface and navigation are people with very little going on in their life."I hate the new changes to a free service I have no obligation to use! How will I ever stalk my exboyfriend and build my farm now!?"

I saw every change you made for the good. Well except that one time you decided to really mess with your security settings and caused mass panic. But at the same time, those could be manually changed and people thought twice about what they posted on the internet. So we all won.

One of my favourite new features of yours is your ability to categorize status updates for me. My feed is no longer bombarded with every single post about Christmas, Thanksgiving or Black Friday my friends post. You package them up neatly for me in nice little internet package and tell me, "12 people have mentioned the 4 horsemen of the apocalypse." And I can choose to look at it if I feel like it. This really caters to my desperate need to organize everything and compartmentalize my life. Tremendous.

Then you disappointed me.

This morning I got out of bed just as many of my Canadian friends were turning in. Thank you 7 hour time difference. I was very excited to get out of bed this morning, not only is it Friday, not only is my Ikea order being delivered today, not only is it the husbands work Christmas party but it was the morning after the round robin games of the first ever Roller Derby World Cup. That's right. The FIRST EVER. I had visions of sipping my morning coffee whilst scrolling through the Facebook chatter whilst staring at the Swiss mountains. A good morning indeed.

I saw this as I sipped my coffee. 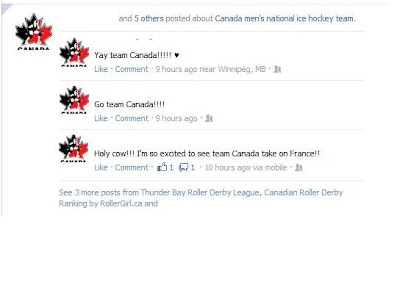 For a moment I forgot about the beautiful mountain view from my living room. I just sat there thinking, "but it's not hockey...it's history in the making!!!"
Now I understand dear bookface there is no way you can predict from "Go Team Canada" on a status as to what sport it is pertaining to. And I'm going to assume that within your huge massive programming that the first ever Roller Derby World cup is barely a blip on your radar but to assume we're all talking about hockey is just ridiculous. For all you know we could have been talking about the Earth Worm Charming World Cup (which by the way exists...google it.) I did ask the husband who is a bit more tech savvy than I am and he said, yes its probably a default setting of some kind but why don't you send a bug report.
Oooooooh. He's smart.

Before I submit my bug report though I would like to help you out about your lack of knowledge regarding the The Roller Derby World Cup.The following publications that have covered this event (all of which I found linked on someones bookface wall)
The Guardian
The Toronto Star
The Chicago Sun Times
The Examiner
The A.V. Club
McGill Reporter

And these are only ones that I could readily find linked on Facebook. There are many many others. So this isn't some flash in the pan bout for funsies Facebook. No. This is a serious sporting event showcases some of the best derby athletes  Sweden, Brazil, New Zealand, France, Canada, the USA, Germany, Finland, Scotland, Argentina and Scotland have to offer. This means so much to so many derby players and have cheering for Team Canada categorized as "Canadian mens ice hockey" is kind of a slap in the face to every derby girl every where. I've had the honour of being knocked on my ass by SEVERAL members of Team Canada. I've also had the privilege of seeing my home league play against many the teams represented this weekend.  So why would you break my derby loving heart? Why?
You may not realize this bookface but roller derby is the fastest growing women's sport ever. There are 100 teams in Britain alone. There are 700 leagues across 25 countries as of March 2011. Up from 400 in 11 countries just from a year earlier. We're not going away.
Think The Guardian put it the best,
Derby has been about women since its relaunch, and this is as much part of the appeal for the skaters as it is for the fans. In countries were women's sport is generally marginalised and female athletes don't come close to getting the recognition of their male counterparts, a sport that's as physical and competitive as any on the planet that happens to be dominated by women has obvious appeal.
I will now submit my bug report facebook and I will be encouraging others to do the same. So many next time a first ever world cup for something happens you won't automatically assume it's those crazy Canadians going on about hockey again.
In Derby I trust,
Jam Buster
facebook roller derby roller derby world cup winninpeg roller derby league