"Shut up you're in Indonesia!"

November 15, 2011
The husband travels to some pretty far flung places for work. He's been in Jakarta since Sunday. He left Jakarta today and landed in his hotel several hours ago. He comes home on Monday.

Then in December he's in Kyrgyzstan (he'll miss St. Nikolaus Tag...the first year there is no humanly possible way he could forget it...) and in the new year he's off to Ghana. Johnathan traveling for work is nothing new to me. At one point he was traveling to Connecticut for a week once a month for 6 months for training (and the trips were all planned really close together, at one point he was home for a week, gone for a week, home for week...the people booking the trips were not the ones traveling and I firmly believe those people are complete idiots.) Previous to this he was working for a place that would randomly send him Montreal with sometimes a few days notice. It wasn't uncommon for me to get calls at work from him stating he was headed to Montreal in 2 days for a week. Good times.

A few days before he left for Indonesia I mentioned to John that when we moved here I was promised travel. So far we've had the longest trip to the Matterhorn ever and constant promises of doing something on the weekend or for a few days that have never come to fruition for a number of reasons. 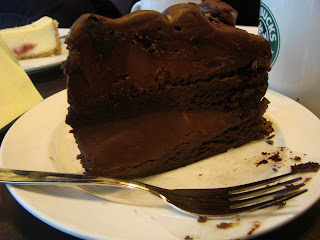 Anyway, whilst he's been stupid hours (it's been the three weeks in which the dignitaries show up and he has to wear a tie to work) and traveling I've been doing to exotic places like Biel (which appears to have it's own version of confusion corner.) No really they do, it has nothing but left turns. I went there to meet some fellow writers/one fellow Winnipegger to write, drink coffee and eat pastry. Or in my case chocolate truffle tort...aka...chocolate wasted cake.

Yes, the husband goes to Indonesia and I to go to a Starbucks in Biel.

Whilst he was finishing up his time in Indonesia and preparing to head to Malaysia I was enjoying lunch at a brewery in the teaming cosmopolis of Burgdorf. 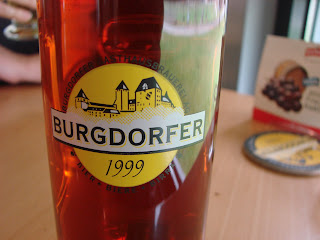 Lovely beer. Lovely food. Most wonderful company. There were plans made to see more breweries. John said he was jealous. I may or may not have laughed at him. This was coming from the man who was calling from a 4-star hotel in Jakarta.

And then I remember, he thrives on adventure. Whether it's a 30 minute train ride to Burgdorf or a 14 hour flight to Indonesia. To him, everything is an adventure to be enjoyed with every ounce of your being.
adventure John Switzerland travel